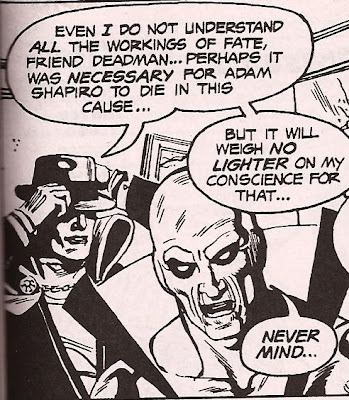 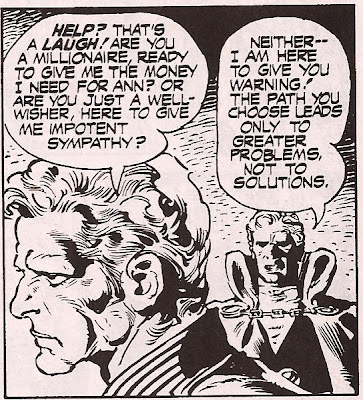 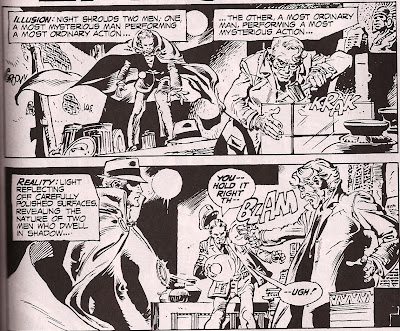 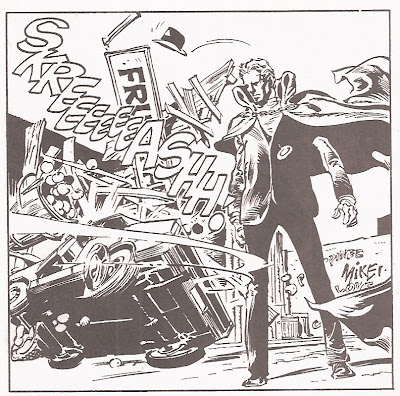 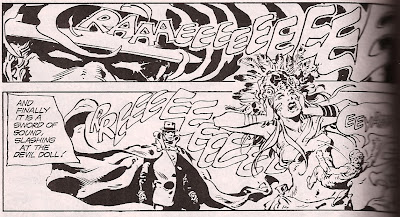 Oh, yeah. My dog makes THAT noise, alright.
The Phantom Stranger's hat deserves its own Who's Who page, a Heroclix pog, and an indy band named after it.
Posted by Scipio at 4:02 PM

Of course, we all know the greatest, most mysterious power of the Phantom Stranger's hat: to keep his eyes in shadow, no matter what the lighting conditions or from what angle his face is seen. Creepy.

I would have figured Phantom Stranger's hat to be more of a Zatanna's top-hat hat, myself.

At least it wasn't out with Zatanna's ponytail holder.

Just imagine what the Mad Hatter could do with that little piece of cosmic haberdashery. It would launch him to villany's top tier!

I think Citizen Scribbler just wrote next year's Brave and the Bold Annual.

The one with the hat chasing the car is adorable. You can almost hear the hat yipping like mad.

I don't know about a band, but there's a song about it: "Hat Back Boogie" by Lee Press-On and The Nails, sung from the point of view of the Phantom Stranger, who constantly proclaims that he just wants his hat back.

I have an old Brave & The Bold with Batman and The Phantom Stranger- it's awesome. They fight a voodoo guy who's got a zombie heavy of varying skin color (he's black on the cover, but unconvincingly white inside the book).

And yes, The Phantom Stranger's hat gets knocked off in the fight. I'll send some choice scans if Scipio wants em' for research...

The Sandman's hat is not a mystic hat, like the others; they would not hang out with it.

Are you sure? Wesley Dodds was the receptacle of a portion of the power of Morpheus, Lord of Dream, for decades; who's to say his hat (worn closest to the brain) didn't absorb some of that Endless funkiness?

You know the helm worn by The Silver Sorceress had to be full of magic. NO-ONE would wear that thing unless it at least contained the power to render you invisible.

Somebody's got no love for him, that's for sure. He's been missing for, like, the whole current run of JSA. What ever did happen to him?

"The Sandman's hat is not a mystic hat"

but... but... but it turns into sand and travels thru the lithosphere along w/ Sandman. Which if it ain't mystical magic, it's some pretty damn weird science. Like, even weirder than the toon-physics that allows Sandy himself to do those things.

Resolution: If I ever start a band, it shall be called The Phantom Stranger's Hat, in honor of this entry. And we shall all wear silly hats.