Batman, the World's Greatest Detective.
Metamorpho, the Freak Who Never Fails.
Adam Strange, the Man With the Plan for Rann.
Dazzler, the Light That Failed!

Poor Dazzler. After extensive research, I finally figured out what doomed her career: she's got no rhythm.

Suddenly, Alison realizes how moronic her face-paint is... 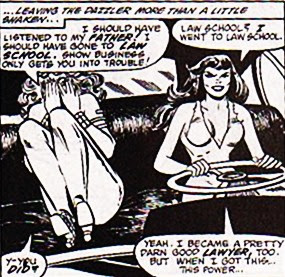 Ach! The last line is missing a syllable! Darn you, Alison; All you had to do is say "gone to law school, huh?" to make it work. But you're too wrapped up in self-pity to compose a decent Heroic Haiku.

In this week's episode,
Liberty gives up the baby for adoption, while JT looks on helplessly. 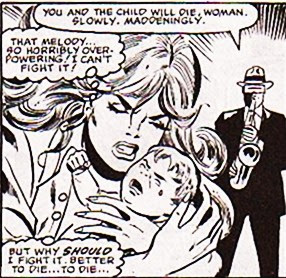 Hey, Scott; sounds like the sax career may not take off,
so don't quit your day job at the school.
But keep the hat; it's boss.
That melody, so
horribly overpowering!
I can't fight it!

Argh; she gave up again, before finishing the line. You're a quitter, Alison! If I had hair like that, I'd never give up.

Cap: "I'm still in the iceberg; I hear and feel nothing. I'm still in the iceberg..."
Marlo Thomas: "She'd be perfect for Phil's show!"
Iron Man: "Zzzzzzzz."
Vision: "System shut down in four, three, two..."
Hawkeye: "Wherever you are, Hannah Montana, I apologize."
Reed Richards: "I--I--I..."
Matt Murdock: "Tonight I envy you, Helen Keller."
Rick Jones: "Hawkeye--you're--squeezing too hard!"
Sue Richards: "Ah. Teeny, tiny, earplug-shaped forcefields..."
Beast: "First, I'll eat her legs..."
The Thing: "Gonna--lose--my ever-lovin' continence!"
Human Torch: "If she talks like that in bed, it's so totally over."
Whoa; total meltdown. Alison's degenerated into some sort of garbled free verse lyric that sounds like Maya Angelou having sex with the Beatles.

Well, I give up (because my hair is nothing like Alison's); haiku is simply not going to come out of The Dazzler's mouth.

But don't YOU give up: please compose a haiku on behalf of The Dazzler!
Posted by Scipio at 11:35 AM

Please tell me she gets a Rogues Gallery Rundown like The Martian Manhunter did. I can't wait to hear the actual backstories of Man With The Earsplitting Saxophone and Former Lawyer Turned Kidnapper.

The Lawyer Turned Kidnapper would make a terrific villain, but that's She-Hulk. A hero, unfortunately.

Drat! I had a feeling it was her. Still, I would love to see a Lawyer Turned Kidnapper. "Ha ha! I know the exact laws I am in violation of and punishment for said laws, but I don't care!".

The Dazzler dazzles
So completely, she is an
Allan Carr movie.


Having just rewatched Can't Stop the Music for the dozenth time, it seems clear to me that the only man who ever lived who could have done justice to this character on film died eight years ago.

Young Steve Guttenberg is so hot.

Your music sucks, but
You've a future: VH1
Nostalgia Specials

aieeeee!! Now THERE's an image I didn't need cluttering up my poor skull!

Oh God, the "death by Saxophone" panel was simply fab! And why the audience of superheroes didn't simply rise up en masse and suffocate her on the stage, I'll never know.

The introduction of "Leather Man" into the ensemble would probably make it into my top ten favourite movie moments of all time.

The genius of that film is that it is the gayest movie mainstream Hollywood produced in the 80s and yet the actual subject of homosexuality is never mentioned once--the apparent implication being that The Village People are just a bunch of nice young muscular men who haven't quite found the right women yet. Oh and it clearly shows what the world missed by not making Bruce Jenner the next Rock Hudson.

A blind black man who can kill people with his saxophone playing by depressing them to death.

But I'm much better now.

"The Village People are just a bunch of nice young muscular men who haven't quite found the right women yet."

Check the beginning of the promo party scene and you'll notice that there's a brief bit showing that each of the Village People bring female dates to the party.


Who is that really?

If the comicsblogospherahedron were THe Simpsons, Scipio would be Disco Stu.

I never would have been able to tell that was She-Hulk. My guess was gonna be The Wasp.

Also, if I didn't know better I'd say that wasn't Beast, but rather some weird combination of Mephisto and Eddie Munster.