I've gotten soft. I can't even remember the last time I was mean to Marvel and the comics they produce.

My failure fills me with guilt, self-loathing, and, um, inconfidence; I have let you down, let down the public, let down my Uncle Zeb who appeared for almost two full panels in my origin. Spending too much time with All My Close Acquaintances Who Also Happen To Be Villainous Marvel-readers (that is, the other panelists on the Big Monkey Comics Podcast), has clouded my judgment and weakened my resolve to use Greatly Responsibly the Great Power of the Absorbascon (*snort*). But now...

And to be completely unfair in my attacks, let's re-commence with ... DAZZLER.

Now, some will charge that choosing a character rooted in the disco fad to represent the foibles of the House of Ideas is inappropriate. I say the opposite. DC has usually striven to be timeless (allowing for changes in technology, most DC stories are as a readable in one era as they are in the next). Marvel, on the hand, has striven to be (if you'll pardon the pun) timely. That approach has its advantages ("We're the hep publishers of the now, O Devoted Ones!") and its disadvantages (e.g. Buford Hollis). He who publishes by the sword is lampooned by the sword.

Besides, I actually love Dazzler herself, a rollerskating disco singer with fabulous lightshow powers. It's an amusing and challenging premise, and DC has done more with less (Tenzil Kem is pretty darned well known, after all).

Don't get me wrong; I am well aware that there are bad DC comics. What do you think I grew up reading? But there's more bad in one bad page of a Marvel comic than in all of Bob Haney's run on Brave & the Bold. What's more, it's the way in which Marvel comics, like Dazzler, are bad that dangs them to heck, and we'll be discussing that later. But for today, let's start out with just

from Dazzler (specifically, Dazzler #21, a Special Double-Size Issue that "revealed ... the shameful secret of Dazzler's past!"). 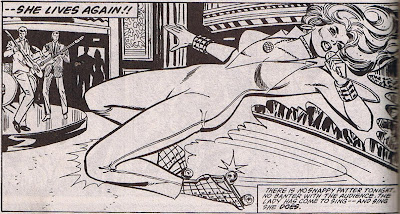 Dazzler Fact: Dazzler's power of ground-flying is rooted in her pelvis! --Scintillatin' Scipio.

Is her back-up band the Beach Boys? I like to imagine she's opening with "The Monkey's Uncle"; after all, it is Carnegie Hall!

You may well be wondering, "Was Dazzler dead? Did Superboy Prime punch the walls of Earth 616 to bring her back?" No, silly; this isn't DC, the House of Recycled Ideas; this is Marvel, where dead means emotionally dead. In the previous panel, you see, she survives a confrontation with her Daddy Issues, whose caption reads "For a moment, the Dazzler had died. But now... " Gosh! Metaphorical death of a costumed identity due to personal conflict with family members! In a MARVEL comic? Who'da thunk it? 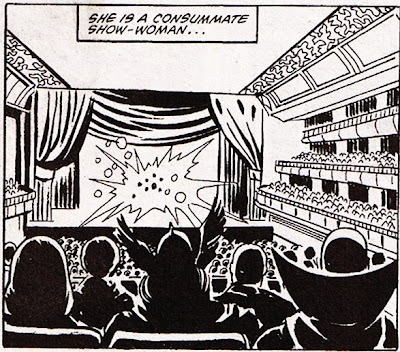 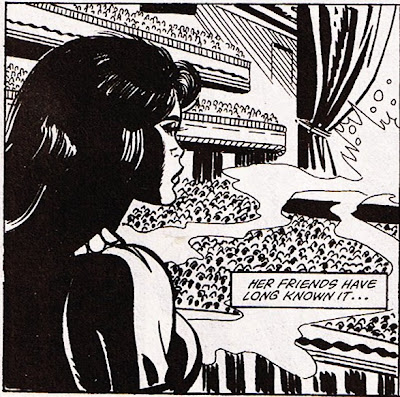 Her "friends", by the way, include every single frickin' Marvel character who has ever lived with the possible exception of Namor who probably wanted to attend but got turned away for being underdressed. Imagine if the entire cast of JLU showed up for Jaime Reyes' graduation ceremony; this is worse than that. Dazzler's real name is "Alison", but it should be "Mary Sue", because she is the apex of the Mary Sue artform.

Dazzler is the Wolverine of Disco. 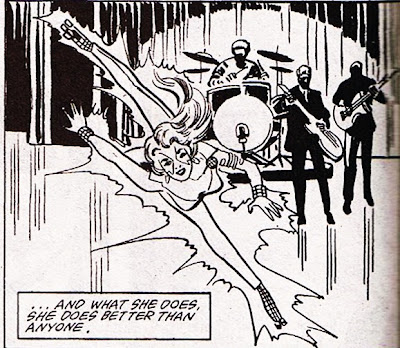 And what she does isn't pretty. Personally, I'm guessing it's the drummer. 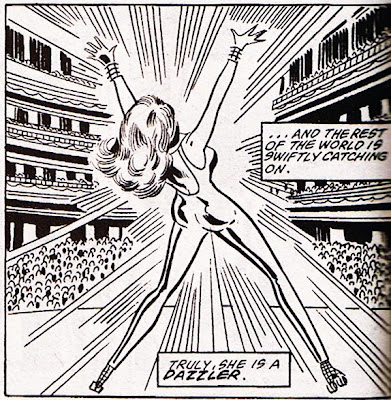 Dazzler Fact: Under the right conditions, Dazzler can convert a musical climax into a visible orgasm!--G-Spot Garling.

Email ThisBlogThis!Share to TwitterShare to FacebookShare to Pinterest
Labels: Dazzler, difference between DC and Marvel

Dazzler, to my mind, stands at the heart of the comic book world's greatest paradox. On the one hand she truly is emblematic of everything that is wrong with the Marvel universe, while at the same time being--by far--the most wonderful thing in it. Truly it is the sum total of her many imperfections that make her inexplicably perfect.

Thank You Scip! GOD, but I hate Dazzler! She was (slightly) tolerable in the X-Men, which led up to the whole "Phoenix" kerfuffle, but then they went on to have her fight Dr. Doom and Galactus! And WIN!

I believe that I still have the bruises from banging my head on the desk.

Ooh, do Speedball next.

1. Razorback rules! Possibly the only character more cool would be Matter-Eater Lad.

2. Considering her drummer was generally shown to be much more interested in another sandwich than anything else (including drumming), I kinda doubt he'd bother with her.

She's totally wiping out in that last panel, isn't she?

Next panel, she lands in the drum kit and her head goes through one of them.

awww, HELL NO! You did NOT just diss the Goddess!

What's your problem Scipio?! All my girl wants to do is sing. It's not her fault she was cursed with those mutant powers. Have you ever read Dazzler the Movie? Did you see the way she worked that aerobics class?

First Halo and now Dazzler. I think you just have a problem with folks who have light-based powers.

I've been with The Absorbascon through thick and thin, but I'm not sure I can be down with a website that's not down with Dazzler.

If you think the feminist hive mind can be harsh, just wait till I tell my fellow Dazzler fans.

First Halo and now Dazzler. I think you just have a problem with folks who have light-based powers.

You know, it's a wonder they didn't Amalgamate those two.

Dude, Vibe was DC's attempt to create a male Dazzler.

I'll stand by the fact that Dazzler #1 contains maybe the best single panel in all of comics, wherein Spidey punches a thug so hard it knocks the afro pick out of his hair.

And Vibe is totally DC's answer to Dazzler.

I don't understand: isn't Dazzler a mutant? Therefore, shouldn't everyone hate her, because she's a mutie? Or does being a roller disco queen outweigh being a mutant? If so, why aren't all mutants roller-skating?

I think she managed to keep the fact that she was a mutant secret; just like Ronald Reagan did with the fact that he tried to join the Communist Party in the 1930s but was turned down.

Vibe is exactly NOT Dazzler, a point I shall later prove.

"it's a wonder they didn't Amalgamate those two."

Dazzler was Amalgamated with Spark from the contemporary LSH, as "Sparkler".

"You did NOT just diss the Goddess! "

I just hate every story she's ever been in.

Dazzler was Amalgamated with Spark from the contemporary LSH, as "Sparkler".

I have no idea who that is.

I don't hate every story she's ever been in; Uncanny X-Men 217-18 (against Juggernaut) was a lot of fun. But beyond that, wow, has she drawn an endless series of stinker stories-- especially but not only Secret Wars II and everything after she went through the Siege Perilous and became a Mojoworld freedom fighter with Longshot.

And yet she's weirdly appealing in spite of it all...

I found Osama bin Laden! He wasn't hiding in a cave, he was drumming for Dazzler's rocking disco-skate extravaganza!

"Her "friends", by the way, include every single frickin' Marvel character who has ever lived with the possible exception of Namor who probably wanted to attend but got turned away for being underdressed."

What probably happened was Dr. Doom tricked Namor into hating everyone on the planet again, which happens on almost a weekly basis.

Please tell me you made up "Mojoworld".

Is that where Austin Powers travels via Zeta Beam to become their planetary champion?

I did not make up Mojoworld.

Oh goody! The only thing I could enjoy more than bad 80s Marvel comics is Scipio ripping said comics. Excellent!

Don't look at it! Shut your eyes!

Ah, yes, the interminable love-bombing of Dazzler, how well I remember it. But compared to Mojoworld it's almost tolerable.

I'm very interested in Dazzler's peg-leg in the last panel. A very inspiring story there, a one-legged roller-skating Disco-Sue.

A very inspiring story there, a one-legged roller-skating Disco-Sue.

Kind of like Heather Mills on Dancing With The Stars.

On the other hand, they amalgamated Matter-Eater Lad and Paste Pot Pete into "Paste-Eater Pete", which alone makes up for every bad Amalgamification.

As to Dazzler, nobody wrote her better (by "better" I mean "worse") than Claremont. One panel they'd have her singing "a raunchy version of 'Proud Mary' that would do Tina Turner proud", the next panel she'd segue into a moving heart-felt number that left nary a dry eye in the house. This would be in, uh, X-Men 255 or thereabouts, I think.

"Truly, she is a DAZZLER?" They never let you forget the brand-name, do they? In more than half the issues, when she defeats the bad guys, "They are truly DAZZLED."

Oh yeah, and Mojoworld, created by Ann Nocenti but turned into a parody of The Culture of Television by Claremont, is all too real* --it gave us the X-Babies.

*Uh, I mean, fictional but part of Marvel continuity for a long time, rather than a spontaneous invention by JTL.

Dammit, I love the fad-tied heroes of yesteryear! Nobody did 'em like Marvel!

Dazzler! Power Man! Iron Fist! Shang-Chi! Night Thrasher! All the dipstick products of editors thinking "hey, them kids today are really into (insert fad here)... I bet if we make a superhero based on that, it'll be huge! Synergy! Synergy!"

The best part comes when the fad fades and the characters are left to stand on their own. What do you do with a character rooted in a lost zeitgeist? Fusing two fading fad-stars, Power Man and Iron Fist, into one book back in yonder days was a stroke of genius, dammit. I loved that stupid comic.

I'm surprised they never created heroes to cash in on later fads, like POGs. "It's Cap-Guy! He slams for justice!"

This title was meant for young GIRLS.

So it's no wonder it failed to satisfy the demands of young (and not so young) boys.

Well, they did that pretty much from 1961 onwards, didn't they? Who can forget the thrilling inner romance monologues of early X-Men comics? Angst-ridden monsters pretending to be superheroes...

The thing that always screwed me up about Dazzler was that I thought disco was pretty much dead and buried by the time Dazzler came along...so I always thought her gig was to be a sad holdover from the Donna Summer years anyway...

Plok, you are giving one my thesis for this entire series of posts...!

Ah, well, great minds, and all that.

Aha, I knew that "interesting" was a teaser!

Run away with it, Scipio! I've got my popcorn all ready, and my feet up.

You're right, plok. It's the one reason why Emma Frost's inclusion in the X-Men is welcome. Mistress Frost is intolerant of angst and her bitchiness about it necessarily changes the tone of the series.

The same thing happened with the Village People movie, "Can't Stop The Music". As I recall, disco died a sudden death; in the summer of '79 it was all the rage and by '80 it was dead. So a lot of projects that were still in production when it was hot, got released when it was not.

"It's Cap-Guy! He slams for justice!"

He already have him; his name is Steve Rogers.