How to Dazzle Your Heroclix Opponents

What is the surest way to be certain that you have the most fabulous Heroclix team at your next game or tournament?

Put Dazzler on it, of course.

This thing is from the "Armor Wars" Heroclix set. It's labelled "Dazzler", but, as you can clear see, it isn't Dazzler. It's Joan Jett. Now, I can fathom the Ekpyrotic Theory, the H2B program, and why Outwit doesn't work on Stealthed figures in adjacency. But I cannot fathom why someone would make a clix of Joan Jett, even as a custom, let alone an official figure. Anyway, the Joan Jett is not the one you need. The one you need is this one from the new "Monsters and Mutations" set: 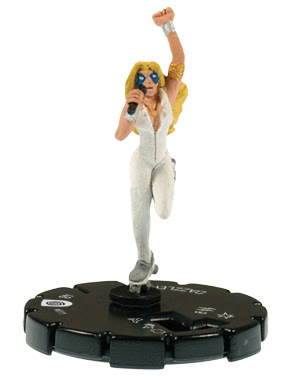 Because that is Dazzler. Or, to be more accurate, that is "The Dazzler", as she is so often called in her own original series. Like "The Batman" or "The Joker".

HOW TO PLAY DAZZLER

By "play Dazzler", I mean "utilize her Heroclix figure in a game". I do not mean "putting on a blond wig, face-paint, and a white one-piece with mirrored rollerskates, then whirling around the rink (or your local nightspot) karaokeing 'I Will Survive' into your Mister Microphone at top volume." Because I have no idea how to do that. None at all. Just like I told the police officers.

Step One: Custom detailing.
This calls for a trip to Michael's Craft Supply. Get a large basket and fill it with epoxy, translucent beads, silver wire, and all manner of glitter. Use these to decorate The Dazzler so as to represent her translumination powers in all their glory. Ideally, you should make several versions of The Dazzler, done in different styles to represent her various abilities and complement whatever outfit you're wearing. Fifteen to seventeen of them should do.

Whenever the Dazzler moves or attacks, you say, "Can't stop to think; I've just got to....

GO FOR IT!"
Step Three: Use her powers. 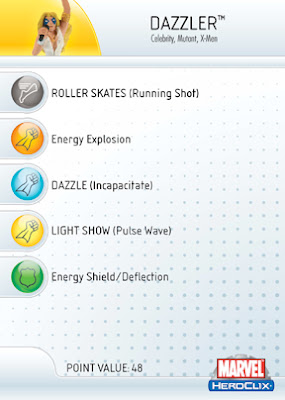 Now, the important thing is not how you use her powers, or whether your attacks succeed. Because, face it, her 48 point dial isn't going to do her justice anyway, since she defeated Dr. Doom, the Hulk, and Galactus. No, the important is thing is jumping to your feet, throwing your hand(s) out, and soulfully singing out the special name of her power every time you use it, while making an appropriate dance move, a la Mary Catherine Gallagher. For example, when I use/shout "DAZZLE!", I've got some left over glitter from my Michael's trip ready to go in my hand, so all I have to do is throw it in my opponent's face. Or, for "LIGHT SHOW!", I simply shine my laser pointer, the one the dog won't play with, on my miniature disco ball pendant and refuse to continue with the game until my opponent, cowed, shields his eyes.

Step Four: Backup Dancers
Choose Dazzler's teammates carefully. Remember, the goal in playing Dazzler is not to win; it's to make Dazzler seem as fabulous as possible. There are many schools of thought on how to do this best, and

Expert Dazzler-players (they call themselves "Osgoods") employ a variety of techniques to this end. Choosing really crappy companions is one method. The 48 point Dazzler is bound to look impressive if she's the heavy hitter on your 400 point team, so try accompanying her with four or five nymphettes and a child choir of Lian Harpers. Another tack is the Blinded By The Light approach, in which you pick only shiny figures to surround her with, the better to reflect her powers. Colossus, Silver Surfer, the Living Monolith , Iceman (the Fishing Boot version); that kind of thing. Another favorite is the Mary Sue Gambit, in which you put every high-profile Marvel character you can think of on the team, but instead of fighting the opponents, you focus all their efforts on protecting Dazzler, increasing her combat values, healing her if she takes a hit, and incapacitating or tying up foes while Dazzler tries to shine them into unconsciousness.

Play--loudly--disco music in the background (and the foreground, if possible), and sing along with it, until your opponent:
(a) makes a disqualifying error;
(b) swoons and/or faints (repeat as needed until the allotted game time ends);
(c) runs away (which counts as a forfeit); or
(d) goes for your throat (that's an automatic disqualifier).

And, if you're venue doesn't allow this, just do what I did: buy the venue.
Posted by Scipio at 3:33 PM

To be able to play Dazzler like that is, alone, is the best reason EVER to learn how to play Heroclix.

Now I wish the Living Monolith would have worn roller skates. That would have rawked. (Or, at least, rolled.) *dodges rotten vegetables*

I'm so tempted to start playing Heroclix just to play Dazzler. Is that wrong?

OK, now I want to know how to make a snowglobe. So I can put my Dazzler in it. With some glitter and an LED.

It would be GLORIOUS!

"But I cannot fathom why someone would make a clix of Joan Jett, even as a custom, let alone an official figure."

Clearly it'd be a preemptive strike against a Lita Ford figure (battle cry: "didn't get laid, got in a fight, uh huh, it ain't no big thing" Needs work.)

No one will make a clix of Joan Jett because she would kick the crap out of every other figure on the board. Her rawk! is too strong.

Call it a matter of divergent cultural aesthetics, but that Joan Jett figure is EASILY the most awesome Heroclix-related item I have ever seen on this blog and that's including the too-awesome-for-words Dirty Cop token!

Call me psychotically deluded to the point of being a danger to decent society if you want to, but as far as I am concerned Ms. Jett is the culmination of all things awesome and should be revered as nothing less than a goddess of the first order--the kind to which you sacrifice only the most primo of available virgins.

That said, the Disco Dazzler version is pretty sweet too.

OK, now I want to know how to make a snowglobe. So I can put my Dazzler in it.

NOW my mind is racing!

So it's a very gloomy Monday Morning in Connecticut. Thank you for making me laugh and laugh, Scipio!

I got two of these in my brick. I'm rollin a Dazzler Duet!

Nate, I'll trade you for the extra Dazzler...

I want to experiment with LED lighting.

Wow, that really is Joan Jett, isn't it? So why didn't the Indyclix set include the boys from KISS? We already know they've got superpowers...just look at the Hannah-Barbera movie.

The Dazzler (I got that part right) looks like the "Rock and Roll Clown" from Metaloplyse TV show. Well maybe his way buffer sister that is.

I sthat Joan Jett or Ultimate Dazzler? And where did you get that mirro die??!?!

Rich, I spent the last 30 years trying to burn that movie from my mind, and you come along. Thanks so much. I'll send you my therapy bill.

Looka like that is, in fact, the alternate Dazzler from the Ultimate X-Men universe. Sadly, that Dazzler wears no silver roller skates.