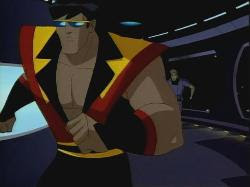 Dazzler's power was to convert the sonic energy from music into light.

Vibe loved having his powers.
Dazzler didn''t like having powers .

Vibe loved being a superhero in the JLA.
Dazzler had no desire to be superhero.

Vibe is from a low to lower-middle class family in inner city Detroit.
Dazzler is a judge's daughter from Gardendale, New York.

Vibe came from a large family.
Dazzler was an only child.

Vibe's family were very close and supportive of him. 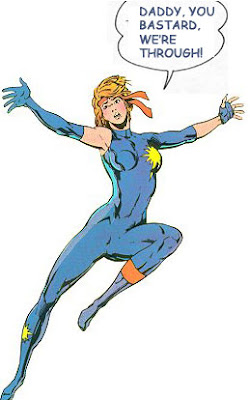 Dazzler was estranged from her parents, who were not supportive of her.

Vibe was unemployed, apart from his superhero duties.
Dazzler was a stage performer.

Vibe was exuberantly (over)confident and fun-loving.
Dazzler, although vivacious, suffered bouts of insecurity.

Vibe was a dancer.
Dazzler was primarily a singer (who could also dance).

Vibe had no romantic interests shown in any of his stories.
Dazzler was romantically linked with Angel, the Human Torch, and other high-profile superfolk.

Vibe died defending the life of child in a filthy alley in a ghetto in New York.
Dazzler had her debut at Carnegie Hall and still managed to screw up her career.


Really, other than the fact that one had a '80s contemporary dance style as a hobby, and the other sang professionally a musical style associated with a '70s contemporary dance style, they have also most nothing in common. I know they aren't the deepest characters ever created, but please don't simply label them "Dazzler = 1970s dance craze" / "Vibe = 1980s dance craze" and walk away. If you do that sort of thing, then you're not getting as much out of your comics as you deserve.
Posted by Scipio at 9:24 PM

Email ThisBlogThis!Share to TwitterShare to FacebookShare to Pinterest
Labels: Dazzler, difference between DC and Marvel, Vibe

Is that Doctor freakin' Strange watching the Dazzler performance, sitting next to Thor, in the post below?

Never would have pegged him as a roller disco fan.

So I know I'm all an anonymous poster and that, but I'd just like to say I love your blog. Consistently fun, literate, insightful, and witty. A pleasure to include on my list of blogs I follow.

On that note, as well as about this particular post; surely there are SOME Marvel comics you've enjoyed. There's got to be something- the regal majesty of Simonson's run on Thor... or the epic and iconic Brunner/Englehart work on Doctor Strange? The goofiness and sheer love of comic books you see in the early issues of the Defenders? The reasons you post for disliking the majority of Marvel's oeuvre are consistent, well thought out, and fair, and I'm not trying to insult you for disliking the House of Idea's work. But there must be something you've enjoyed that they've produced. I'd be fascinated to hear if there was such a run on a Marvel character that you've liked.

Melodrama/tragedy seem like they may be in the eye of the beholder. Maybe you just like Dc's writers better? Not that I'm defending dazzler.

Vibe formed the Zombie League of America until the Martian Manhunter used his memories of Vibe to remind him of his inherent nobility.

Dazzler stuck her finger in a zombie's face like a moron and got infected then vaporized.

It's not as direct a match as what you made, but hey, zombies!

Vibe wears fingerless gloves for the utility while doing pops and locks.

Scip... remember last night when were talking about making a post that literally says it all? You've led by example, my friend.

I agree, Scipio. There is no comparison. No way would Dazzler go slumming with some filthy, ghetto, breakdancer when she could be bringing illustrious personages, such as Dr. Strange, to tears with her rendition of Proud Mary or be lighting it up with a hot number like the Human Torch.

Luckily there are websites -- http://novayahavoc.blogspot.com/ -- that show Dazzler the respect which she is due.

NOw Scip why do you have to go and throw some dirt on Dazzler. Dazzler may be melodramatic, but what do you expect from a stage performer. They Perform. She no different than pop idol in real life. Also she lost her career because she was a mutant, and she was "passing" as a human. I always like the concept of Dazzler her stories might not have been the best written but they had a charm.

Don't get me wrong I like me some Vibe, but He could have portrayed a B-Boy a lot better.

Maybe if Marvel kills Dazzler then Vibe can come back in DC...?

Dazzler came back as a drug-addict, and had to take a job as Lila Cheney's back-up singer. She fumed and whined, became infected by a sentient virus-thingy called Malice, and attacked her friends.

Vibe had to stand next to the macho-nificance of Dale Gunn, and not weep.

Dazzler had it easy.

It actually took me a while to understand what "romantically linked with Angle" meant.

Somehow the sight of Dazzler quoting Sylvia Plath fills me with an unspeakable horror...

I think Vibe could have worked out better if he had been able to hang around a little bit longer. I mean, think about a guy like Luke Cage -- he was saddled with a ridiculous "street" lingo early on, and he overcame that in a short few years. Vibe not only didn't have that long, he also had to do it while on a team book.

Dazzler, meh, I like her quite a bit with the current Excalibur team but never really read her otherwise.

Of course, both pale in comparison to Steel, greatest of all short term JLAers.

Gotta call foul on those last two; Vibe didn't die "defending the life of a child". Professor Ivo's android was specifically tasked to kill Vibe, and the child was never in any danger. Vibe died failing to defend Vibe.

Which kind of negates the "self-sacrifice" part of the last one; sacrificing yourself defending yourself is pretty much just a nice way of describing "going out like a punk in the street." I liked Vibe, I think he got a bum rap, but his death was not heroic. He just got murdered.

"Professor Ivo's android was specifically tasked to kill Vibe, and the child was never in any danger."

But Vibe didn't know that; his internal monolog indicates that he though the child was in danger.