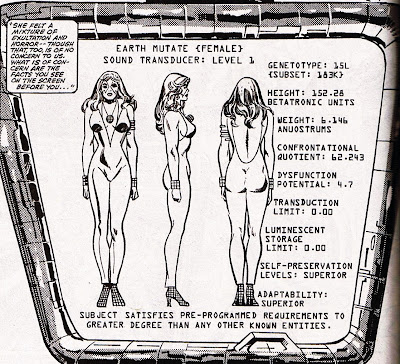 Adaptability Superior.
That means you can wear blue face paint and a miniature disco ball pendant with almost any outfit.
Posted by Scipio at 11:47 AM

What does "Subject satisfies pre-programmed requirements to greater degree than any other known entities" mean? Is that Galactus's idea of a pick-up line?

Would it make you feel better or worse, Scip, to know that within the Marvel Universe, there was a Dazzler movie made? I don't remember the details, but she was outed as a mutant just before the movie came out, and as a result, it bombed.

Wait a minute, why is she wearing high heels in the picture? Aren't waffled silver roller skates one of her trademarks?

Because, believe or not, the wheels are slap-ons that she carries in her purse and attaches to her high heels as needed.

I'm not sure why I feel the urge to defend poor Alison...I'm an X-Men fan, but she's never been a favorite of mine. Still, if you'd like some insight into her seeming "Mary Sue" status, you might want to check out this edition of "Comic Book Urban Legends Revealed" over at Comics Should Be Good. It seems that Dazzler was created as a cross-promotion with a record company, must like all the toy promotions Marvel was doing at the time. Does that let her off the hook? Not really, but it does make things clearer.

Seriously? Cross company promotion? Didn't know there was a hug market for nerds who also discoed when it was cool...

If so, high-heeled roller skates are one way of doing it.

"Didn't know there was a hug market for nerds who also discoed when it was cool..."

The cross-promo was probably inspired by Olivia Newton-John, and I would think it was an attempt to get girls to read comics. Hey Girls! Roller Disco Comics!

She's the only singer of that era who I can think of that had significant work in other media, including of course a roller disco movie.

Well, there's the Village People. Was there rollerskating in their movie?

I liked this post so much, I had to dig up my old back issue of this comic. I've forgotten how much hilarity comes from a regular Dazzler comic, let alone one where she fights with Galactus!

"Well, there's the Village People. Was there rollerskating in their movie?"