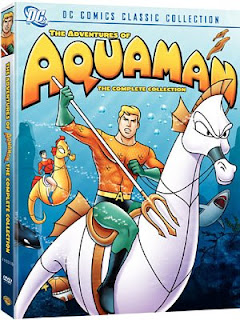 There are two types of people in the world: those who think Aquaman is great and those who think he's stupid. Therefore, everyone should buy the newly released DVD collection of the Filmation Aquaman cartoons (preferably through Big Monkey!).

People who know Aquaman is great deserve to own this collection because Aquaman has never seemed cooler than in this series. People who think Aquaman is stupid deserve to challenge their own assumptions by buying it and confronting the Glory That Is Aquaman.

I assume most of my readers have seen these cartoons at one point; perhaps I'm wrong? Here's a sample Aquaman story. If you haven't let me tell you, the Batman ones are rather dumb and the Superman ones are kind of dry.

If it's one thing Aquaman's adventures aren't, it's dry. He fights a wide variety of threats, such as monsters (lots of those in the oceans), aliens (you'd be amazed at how many threaten our oceans!), traditional villains (Black Manta and Fisherman), and ersatz villains (such as that hyper little seaqueen, "The Brain"). Some of the ersatzers are kind of clever, including one who controls sea plants, instead of animals. And hearing poor Ted Knight try to come with yet another voice variation for each one is an entertainment all its own.

The music, narration, and sounds effects are brilliant. Ted Knight could narrate the phone book and make it seem dramatic. Every time I hear the sickening thud of Aqualad getting hit in the head (which is every episode), I rewind it at least once for a second pass. Nobody takes a wallop like Aqualad.

It's pretty. Oh, sure Filmation ain't exactly Pixar, but if you adjust for that, the backgrounds are beautiful and exotic. Sure, Filmation is famous for using set animation sequences again and again in different setting. But you know what? They're darned good at it. And the Aquacave? Best headquarters ever. It's HUGE. So much tech, it makes the Batcave look like a Junior High Science Lab.

The character designs are cracking; for example, the seahorses have distinct personalities, reflected in their looks (innocent Imp and no-nonsense Storm).

Characterization is good. Aqualad is supportive, but not a goody-goody. He's not useless, but neither is he perfect (oh, so far from perfect). Tusky can be annoying, but if you just think of him as a dog instead of a walrus, he's less kill-worthy.

Aquaman is competent, but not overconfident. Aquaman is the perfect balance between Batman and Superman. He's the one Golidlocks would choose. Batman is not powerful enough; Superman is too powerful. Aquaman is just right. He varies the powers he uses (superstrength, waterballs, the aquaturbine trick, the fish). And when he does call the fish, it's only after he's tried to solve the problem himself. The fish also stay on spec, and are generally used much more realistically than in the comics.

That would be Max Fleischer, I'm guessing.

I'm afraid I've only caught bits and parts of this on Boomerang, so this boxed set is pretty tempting.

There was an episode where Aqualad chided Tusky for being... Well, himself, and Aquaman rather gently and fairly told "tadpole" to give the walrus a berth. That was rather funny and by turns touching and showed me, personally, how a de-Namored can really work.

"Nobody takes a wallop like Aqualad"? Now you're just messing with us.

That Aqualad; what a trooper!

Yes, the DVD's are excellent.

I'm in the camp that simply luuuuurves Aquaman and still enjoys making fun of him...

This set allows me to do both. Long live Aquaman!

I heard that the Aquaman documentary included on the set is really well done. Looking forward to viewing it once it arrives from Netflix.

I joined the swim team because of Aquaman and it was one of the best moments of my life.

I fully intend to purchase this as soon as my financial situation opens up a little. I devotedly watched these cartoons (in weekday syndication) as a kid in the early-to-mid 70s, and look forward to sharing them with my kids.

Ah, the Filmation Aquaman cartoons. I remember first watching them when I was only 6 or 7: they had this VHS tape filled with episodes at Blockbuster. Yet my foolish self never thought the series would get its own DVD collection.

You might say these cartoons are textbook Aquaman. He's brave, strong, smart and goes on exciting adventures. And no mystical mumbo-jumbo in sight.

I assume you must have come upon these videos while scouring YouTube for Aquaman clips, but I have to link them for my fellow Absorbascon readers.

Next time I'm at a party, I'm totally doing The Aquaman.

Filmation -- despite working on shoestring budgets -- was one of the finest animation studios of the 20th Century.

They were, after all, the studio responsible for He-Man and the Masters of the Universe, the cartoon show that shaped me into the man I am today.

Make of that what you will...

These cartoons, were, of course, awful, but still amuse me to no end. It cracks me up that they reused some of the Aquaman swimming animation on Kirk and Spock in one of their animated Star Trek episodes. Since Wil Wheaton ended up playing Aqualad on Teen Titans, it all came full circle...

I watched these religiously as a kid and was always fascinated by Aqualad's hair. Even under tremendous pressure at the bottom of the ocean, it formed a hair helmet that would make Night Girl proud.