I think that most comic book buyers do and that it's not just me. Sure-sells are features of comic book story (usually just a single character) that instantly make you buy the issue.

Everyone will buy a comic with a crying gorilla riding a bicycle through a fire against a backround of purple. But each of us has his or her own weak points, features that make you buy a comic.

It's only a sure-sell if, once you know it's in the comic, you immediately say "put in my sub" without needing to know anything else.

I'm going to admit my sure-sells, but I expect you to admit yours in return! 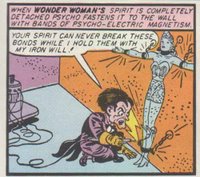 3. The Crime Doctor. Even if he weren't so darned colorful, the concept is instrinsically interesting.

4. Dr. Psycho. The ultimate personal violator; very creepy. Always has been. William Moulton Marston created a lot of sick stuff; nothing sicker than Dr. Psycho, though.

5. People forced into playing life-and-death games of chess (or the like). I pretend it's a "Seventh Seal" thing, but we all know it's really a Despero-versus-Barry thing.

9. Anything with Krypto kicking supervillain ass because he couldn't care less what your name is or what your powers are and is happy to shake you by the neck until it snaps, as if you were some squeaky toy or a pesky squirrel.

1. Hal Jordan. Can't get enough of that head-conking goodness.

2. Doctor Fate. I have a weakness for magical characters, and I've always loved the super-mysterious helmet/mask thing. (Hated the half-mask version.)

3. Phantom Stranger. Magic and a fedora. Plus we just don't see enough of this guy. You don't want to use him too much and blow the mystery, but he needs to show up more often than he had been, at least prior to DoV.

5. Black Canary. She's a great character. It's a close call between her and Barbara Gordon for my favorite female character in the DCU, but Barbara's not a sure-sell; it's all too easy to write a story about her that I won't like. Especially if your name rhymes with Kevin Mason and you have a Nightwing fetish. With Dinah, it's harder to do a story I won't like. Plus ... fishnets!

I also have sure-sell creators:

1. Kurt Busiek. Anything in the supers genre written by KB is going to get my money. Heck, I even bought every issue of Power Company. Including all the lead-ups. Plus, he looks great in fishnets!

2. Gail Simone. Fell in love with her writing on BoP, have followed her to every other title she's done. (What? No, it's just the writing! I've never even seen her in fishnets! That wasn't me in the backyard with the camera! I swear!)

3. George Pérez. So even if the writing sucks, you've got those pretty pictures to look at. But chances are, if they got GP to do the art, the writing won't suck either.

4. Giffen+DeMatteis. Either alone and I'm likely to get it, but put 'em together and it goes directly onto my pull list, do not pass go, do not collect $200.

5. PAD. Not that he's doing anything for DC anymore, but his name is enough to get my vote.

) Unsung Villains That Shoulda Been Contenders--Captain Boomerang, the Ten-Eyed Man, Rainbow Raider, Killer Moth (who knew he had so many fans?), the Top, IQ, the Tattooed Man, the Spook, Slipknot, the Master Jailer, the Signalman, Punch-n-Jewelee, the Monocle.

) Amanda Waller. She rocks my world.

) Grodd and/or Gorilla City (see above)

) Super-pets. I pine for the return of the Kryptonite Bulldog!

I have no control when it comes to:

The Green Lantern Corps (and quite a few of the individual members). Green Lantern stories in space (got me to start buy GL post-Marz)

The Crime Syndicate (or these days, any parallel Earth stuff at all)

Gorilla Grodd. I think that's what tipped me over the edge to get Superman/Batman

1. Evil Twins
2. Kara Zor-El of Argo City, the one and only Supergirl.
3. The original Doom Patrol
4. The Freedom Fighters
5. a Mera who doesn't suffer from a loss of power and/or mental illness
6. The Creeper
7. Katar-Hol, the Silver Age Hawkman
8. the Barbara Gordon Batgirl
9. Bat Lash
10. Tawky Tawny, the talking tiger
11. Krypto, the original and greatest super-powered pet.
12. The superheroic Dr. Light - she's the Lucy Liu of DC Comics
13. the android Red Tornado
14. a Power Girl who thinks with her fists
15. a Krypton that didn't deserve to get blown up

Oops, I forgot the Metal Men! But only featuring Gold, not the robotic Doc Magnus.

Not a long list for me, but here we are:

Martian Manhunter: He rarely guest stars, but when he does, I'm all over it.

Creeper
Enemy Ace (especially the weird Batman stories that reference him!)
Original Doom Patrol
More than one villain ending in "O": Starro, no; Starro and Eclipso, hell yes. Go O-Squad!
Out-of-context Jonah Hex (Hex in his book, good; Hex in JLE? Priceless.)
Question is right up there, especially as a guest-star. Same with Kamandi, original Omac, Travis Morgan, original Demon, Power Girl: by themselves maybe not, but guesting definitely.
Even Metamorpho can't get me to buy Outsiders, so there are limits.

It's not so much the characters as it is the actual storylines that maket a "I gotta get this!" for me. In short, I'm a sucker for

Time-travel stories. Especially ones that either loop through already-established superhero history or that feature characters from that superhero universe from a different time. I loved the West Coast Avengers story that showed them visiting Ancient Egypt at the same time as the FF and the same time as Dr. Strange (in different stories from different years).

Alternate-universe stories. Although I did draw the line recently at "Return to the Age of Apocalypse" and "House of M" (tho' I recently read and enjoyed the FF/Iron Man House of M trade. I prefer these stories in single or a handful of issues, not a company-wide crossover.

Any stories set on Krypton. Reading the old FABULOUS WORLD OF KRYPTON! backups by Maggin and Bates in an older cousin's Blue Ribbon Digest hooked me. Gerber's version a few years ago was good too.

Hm.
1. Firestorm. Kept me in Extreme Justice to the bitter end; would have brought me to Power Company if Busiek didn't already draw me in.

2. Deadshot. Even bought the Amalgam comic featuring the combination of him with Bullseye ("Deadeye". I'd have gone the other way, I think.)

3. Legion of Superheroes stuff interacting with present-day DC. Because I want it to make sense and am a glutton for punishment.

4. Old Krypton. Stories of the real Krypton, preferably without any time-travelling visitors from Earth. The Krypton Chronicles was a dream come true...

5. The Omega Men. Or any Omega Men supporting character. Except for Lobo, of course. Lobo doesn't count. And any L.E.G.I.O.N. member, too.

1)Time Travel/Parallel universe stories;
you and me both, Bully.

3)Jonah Hex (as a guest star, of course)

4)Suicide Squad; not sure if the 'Secret Six'version counts, but I think it does.

5)Ambush Bug; especially when Giffen draws him, just a normal guy in a baggy supersuit.

6)Alpha Flight; I had to put something in here that wouldn't be on anyone else's list. And I'm Canadian.

I'll admit to buying anything that has:
1. Doc Samson - because it helps to have a guy who can kick ass and analyze why it was necessary
2. Luke Cage and Iron Fist - why don't they have their own book!?!
3. Adam Strange - kick ass on two planets, by request I might add
3. James Robinson
4. Geoff Johns
5. John Cassaday
6. Joss Whedon and his creations (Buffy, Angel, Spike, Serenity)
7. Return of lame-asses made good, like Cat-Man, The Rogues, Aquaman (before the seawater-n-sorcery travesty they have now)
8. Infinite Crisis and the endless miniseries that spew forth "You're RUINING me!"
9. The Golden Age - Oh My God, Batman in the Golden Age planned like three seconds ahead, let Catwoman escape because she was hot, & said things like "Quiet or Papa spank" and "Come and get it, suckers!" Superman smashed through radio stations to make his own public announcements and had to run from cops. The creator of Wonder Woman was really, really into bondage.
10. GCPD - the best police force in the world

2. Mr. Mind!
Because worms ARE evil, and it's time word got out.

4. Intelligent animals! (powered or not)
The Legion of Super Pets, Ace the Bathound, Rex the Wonder Dog, Topo the octopus, Storm the giant seahorse, etc. And I'll include Kangas here.

5. Bat-Mite!
Because he's the goddamn Bat-Mite.

6. Swamp creatures/Bog beasts/Muck men!
The Heap and Man-Thing being the decomposing best.

8. Who's Who pages!
(Yes, they did advertise these... on the covers of a few annuals.) At the back of regular comics and as a series. Esp. those pages featuring new art by old greats. NOT a poorly made non-inclusive DC Encyclopedia!!!

9. Gorilla City!
All hail King Solivar! Banana daiquiris for all!

10. The Sea Devils!
The reddest wetsuits. The goofiest villains. The strongest kickers. And the most underused team today.

Things that I am sucker for are:
1) Sea Devils
2) Any villian or hero from the Forgotten Heroes and Villians except for Dolphin.
3) Captain Marvel and the Marvel family
4) Deadshot
5) Catman
6) Power Girl
7) Black Lighting
8) Halo and Looker from the Outsiders
9) Booster Gold
10) Blue Beetle
11) Guy Gardner not when he was Warrior
12) Mister Miracle
13) Punisher, I was sucker for him in the 80's and once again I am sucker for him again.
14) Deadpool before he teamed up with Cable.
15) Mark Waid, I don't know why but I am sucker for his stuff.
16) Anything book that is part of the Ultimate Universe. No matter how sucky they are. I have them all.
17) GI Joe
18) Uncle Scrooge particular anything by Don Rosa. I will never shop in Big Monkey again until they stop insulting Uncle Scrooge and comparing him to the Ducktales version. And get in stock more duck books.
19) Angel and Ape
20) Brother Geek
21) STAR Corps
22) Captain Atom
23) Sgt Rock
24) Unknown Solider
25) GI Combat
26) Marvel War Comics.
27) Garth Enis War comics.
28) Hitman
29) Birds of Prey
30) Sucide Squad
31) JL Antartica
32) Sgt Bilko Comics
33) Magnus the Robot Fighter
and finnally
34) Anything put out by Jim Shooter.

Who's insulting the Duck books?

We carry them in the front of the store!

I figured out my sure-sell.

Not E-2 Superman, but the guy who couldn't fly or see very far, but was willing to throw an abusive husband through a wall.

I love that guy.

DC Characters? I can only think of one, and he hasn't shown up in years.

One Sunday I went in your shop and was made fun of love for all things ducks. You where also sold out of "The Life Times of Uncle Scrooge" at the time. The only duck like thing I saw that day was the Chicken Little Pez head. Which I bought for my daughter.

Ack! I forgot the Phantom Stranger!

I'd imagine none of mine are incredibly shocking:

1. Any of the Earth-based Green Lanterns
2. Robin
3. Sand
4. Barbara Gordon
5. Shiva
6. Jason Blood
7. Ripped Costumes and/or bondage elements in the covers (they make me laugh)
8. Power Girl
9. Gratuitous Gendershifting or Age Shifting
10. Storylines involving Time Travel or Evil Alternate Selves
11. Cats, I like cats.
12. Stories with split personalities or duplicates that end up inadvertantly revealing a lot about the heroes.
13. Long lost relatives (they might end up stupid later, but the surprise and implications are usually interesting.)
14. And modern Age/Post Crisis visions of the 1940s

Monkeys (if they talk, I could buy two)

Heck, the JLI and characters from that era in general, I guess.

There's prolly more, too. But that's all for now.

If the Harry Potter books had ONE picture of Killer Moth in them, I would buy them. And I REALLY HATE HARRY POTTER BOOKS!