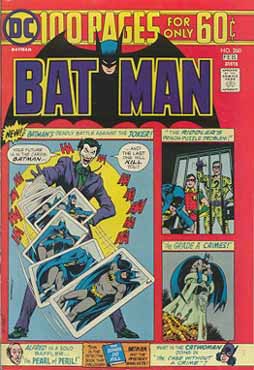 His favorite Woody Allen movie, according to a random issue of Starman.

Random trivia point: While #260 may not have referred to Arkham by name, it was named (well, at least, "Arkham Hospital" was) two issues earlier, in #258 - the facility's debut.

Say what you will about O'Neil's writing, he gave us some additions to the Bat-Mythos that were, in the sacred words of Wayne and Garth, totally worthy. And I think his rôle in the darkening of Batman is overrated; when he started, Bats was in serious need of a little seriousness. If the pendulum has since swung the other way . . . way, way, way the other way . . . that's not Denny's fault.

To amuse himself, the modern Batman would probably imagine his hands around the neck of his parents' killer, squeezing tighter and tighter.

Sorry, but I just can't imagine the Bruce Wayne of the past few years having enough of a life to find anything amusing, let alone a Marx Brothers movie. Maybe the current creators will rectify this situation.

And as far as Denny O'Neil's writing goes, he's had his share of hits and misses just like any other creator out there. But his role as Batman's editor for so many years left as indelible an impression as Mort Weisinger left on Superman.

The whole "urban myth" who never belonged to the JLA, liked Superman and was bordline psychotic formed during O'Neil's watch.

Strange as it may seem, Batman is a total mark for "Dude, Where's My Car?"
That's why he's got all those remote control thingers in the Batmobile...for just such an emergency. If he actually had to ask the question, he'd double over laughing and the bad guys would club him like a baby seal, or Hal Jordan.

Thanks, I'll be taking that.

And I guess today's humorless Batman would focus on the things that actually make him smile, if not laugh out loud.

How well Dick Grayson turned out, a dry riposte from Alfred, Selina, kicking Super Gorilla Grodd in the Super Gorilla Gonads. Actually, he made a joke while doing that that made ME laugh out loud, so there maybe a sense of humor there after all.

Like, I can't vote for any of the quotes in the quote poll because MY favorite line of the week--"Diana, Alfred will need that recipe--isn't up there. This is after we see him kicking back with his feet on the table and off handedly calling Superman an idiot.

No matter what age you're in, you can always get some laughs from Hal Jordan getting it on the head.

To laugh, all Batman has to do is think about the time he gave the Batman-tle to Jean-Paul Valley.

Actually, the first time the Joker is mentioned as having been incarcerated in an asylum rather than prison was the now-classic Batman #251, "The Joker's Five-Way Revenge" by O'Neill and Adams.