The Meaning of Supergirl

We all know that Superman teaches that one man can make a difference and the importance of humility, Batman reminds us of our power to turn tragedy into triumph, and Wonder Woman shows us that the way to men's hearts is through manacles, chains, and bondage ropes.

But what do we learn from ...
Supergirl? 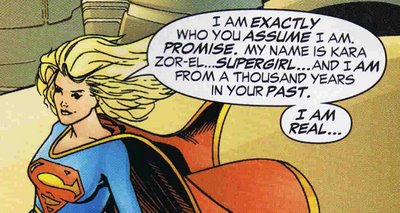 Here, Supergirl contents herself by snuggling up with some Cartesian auto-rationalism.

Our lives are meaningless. 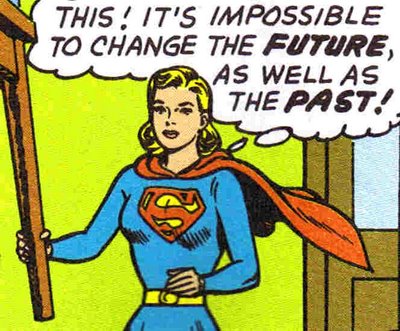 While attempting to grasp the platonic ideal of "tableness" through its instantiation,
Supergirl experiences an unrelated philosophical epiphany.

There is no free will. We are little more than wind-up toys, painted with pretty illusions of sentience and self-determination. 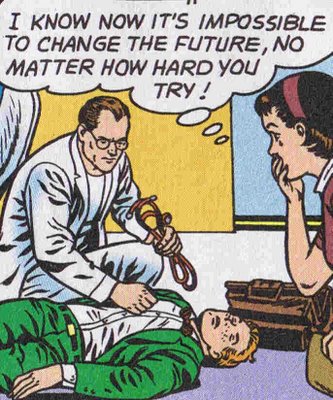 Like many people,
Linda learned about lack of free will through her HMO.

Supergirl lives in a Newtonian clockwork universe whose initial conditions have already determined for all eternity the worldpaths of every passing ion (yep-- even Kyle). 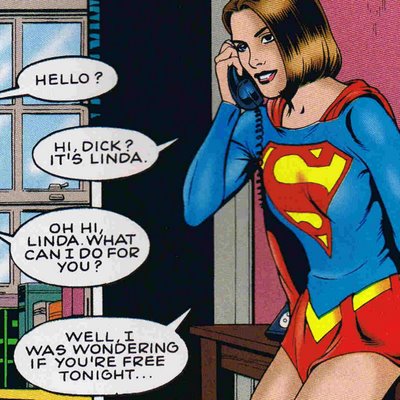 Only a total lack of free will could explain those shorts.

Oh, Linda/Kara/Supergirl, what a sick little sense of humor your bleak view of existence has left you with. Obviously, when she makes her coquettish inquiry in the above panel, she's merely indulging in ironic Dick-teasing:

Of course not, Linda. We all know Dick's not free. Not tonight. Not ever. No one is free. Dick is just a wheel rolling in a rut to a predestined end on a predetermined path, like the circles that you find in the windmills of your mind.

It's so sad; when she was young and naive, Supergirl was bound and determined to made a difference in the world: 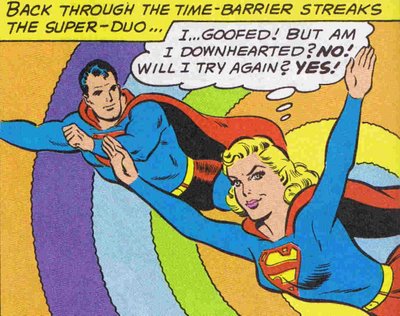 But then she realize that she was simply ... bound. Already ... determined. Then her inner monologue outlined her personal truth:

"I am Superman's female cousin. Nothing more. Nothing less. No matter what I do.

Whether I (or Edmond Hamilton) try to make me into a Satan Girl or I (or Peter David) try to make me into an angel, it is for naught. I cannot be "Matrix", symbol of the power of self-change, who was so crippled by the existential dread of freedom and burdened by a sense of self, that she actually turned herself into Superman, as anxious to be rid of choice and self as Eric Hoffer could ever imagine. 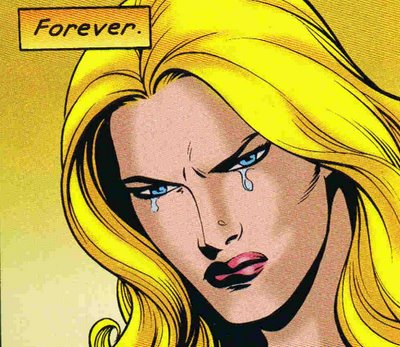 I am Superman's female cousin. Nothing more. Nothing less. No matter what I do. " 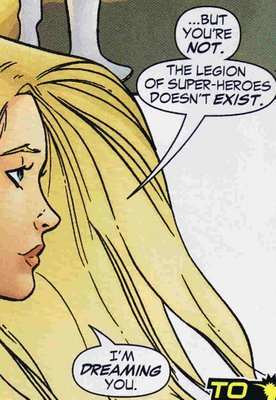 Eventually, in the 31st Century,
in an attempt to reconcile her rationalism and determinism,
Supergirl will embrace solipsism; it's already been decided.

All those costume and career changes? Merely cruel mechanisms of deceit used by the universe to keep her from a deeper understanding of her inability to change. Her apparent "self-sacrifice" to save her cousin and the universe? Rendered meaningless by later Crises, and further instantiations of the idea that is "Supergirl". 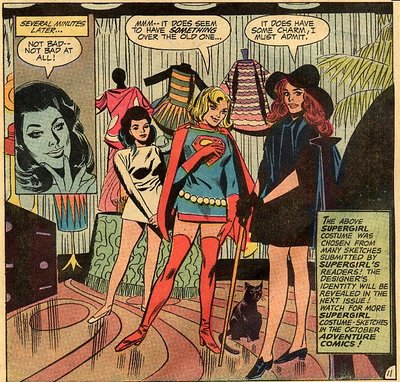 Numbed now by her eventual realization of the automatonic nature of her existence, Supergirl is perfectly suited to her role as a cipher with no apparent internal organs, as the "secret weapon" prop in someone else's story (even in Superman 650). 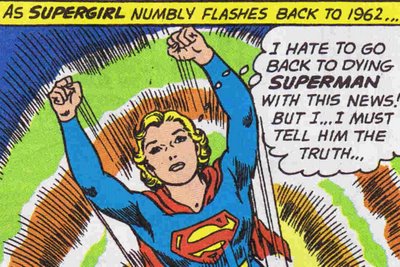 So, remember on those cold and cheerless nights when reality blows hard upon you ... you're at least as powerful as Supergirl.
Posted by Scipio at 11:54 AM

Whenever Supergirl starts talking about the deep meaning of existence, my monads start acting up and I can hardly control the functions of my bodhi.

Sigh. I don't know what's tougher these days. To be a fan of Supergirl or Hal Jordan...

Wow, this would be very depressing if I didn't remember that the Absorbascon doesn't really exist at all, but is actually a dream that my delapidated, unused, and slumbering (but powered) Gateway Pentium II is having.

Supergirl creats ontic communities wherever the winds of fate toss her. Deep.

I read that issue of LSH and fully expect the entire next issue to be:

Oh wait. That's only what I'm dreaming the next issue will be.

Does this mean that I've seen Mark Waid's bare midriff?

Thanks a lot, jacob.

I think my brain just melted.

Don't worry, Ragnell; the destruction of your brain will not change your future.

Or your past. Nothing can.

Relax and enjoy the ride that is Supergirl's World

You are a genius. A crazed and demented one to be sure, but a genius nonetheless.

The wierd thing about the scene with Linda and Dick is that she's talking into the phone when Dick is clearly on the other side of the room. Is she visiting him in prison or something?