If you play Heroclix and haven't bought at least one of the new maps from Xion, then you are a fool, I say. Fools! Utter fools!

Now, Xion's had their stumbles in the past, but they've made up for it with this latest endeavor, which includes six glorious maps, with the new standardized "visual coding" so players know what's hindering terrain and such.

Here, for example, in extreme miniature, is "the Cave": 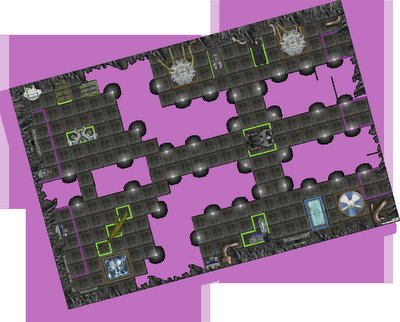 You know, "the Cave" seems familiar somehow (particularly the cars and the dinosaur), but I can't quite place it; I'm sure it'll come to me eventually... . Oh, and those gaps in the map are bottomless pits where random thugs and disposable one-time criminal masterminds who've stumbled onto "the Cave" and learned your secret identity can conveniently, um, "slip" and fall to their dooms. I hate it when that happens.

They also offer The Bank (which cries out for Bat-villains and Flash Rogues), The Press Room of some great metropolitan newspaper, The Neighborhood, The Park (which is very groovy for aquatic characters because a river runs through it), The Prison (which might double as, say, an asylum), and Rooftop Mayhem (my favorite).

You will positively weep at their beauty; thank the gods I had the presence of mind to view mine only under protective plexiglass lest they be tear-stained. They also provide interesting gameplay opportunities, with lots of places for leapy -climby- stealthy- parry- dodge- thrust- hah-! action.

Yes, they cost 20 bucks a pop, but if you're tired of playing with fabulous looking and interesting Heroclix figures on crappy boring maps, it's worth it. I looking forward to defeating Devon on these maps tonight!
Posted by Scipio at 8:35 AM

These maps are so to scale, you add your own giant penny by pulling it out of your pocket change!

WOW! Always love to see positive talk about what we're doing here at Xion! Thanks!
I do, though, have to clarify that Xion isn't the creative group behind these maps, that esteemed credit belongs to ClixBuilders.com -- we're just offering the service. We do have new maps of our own on the Xion eShop, though we've been primarily setting aside time as a print service, than design & print.
We will, however, be producing more maps soon! Up next: "The Ice Caverns of Mount Taegus" #3!!
Best!
Charlie
Team Xion

Thanks for the praise on the maps. I try to do my best to make the maps be more than locations. I try to provide strategic points of battle and scenario options when designing the maps.

I have started to include the alpha/numerical coding on the sides of the maps with my newer maps and have thinned out the color coding a bit to make them look nicer on the maps.

Also STAPLES can laminate these maps for about $6. Well worth the investment.

Thanks for the praise and anyone can go to my website and email me with any comments or map suggestions you may have.