Off Target on Green Arrow 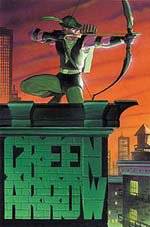 I can understand (believe it or not) why people are into Hal Jordan; he's just not my kind of guy. But Green Arrow? I don't get how he can be anybody's kind of guy.

I know Green Lantern has lots of fans (oh, I hear from them!). But I was shocked (no, really, I'm not being snide here) to find that Green Arrow has lots of them, too.

I was suprised because my perceptions of Green Arrow are that he went from being a wan Batman-manque` to being an annoying, conceited, self-righteous, hypocritical womanizing jerk, without much in between. At what point could someone get to like him?

Characters like that can be interesting. And useful, particularly when used to illuminate the personality and viewpoint of others. But that's pretty much how I see him, more as a device for revealing the characters of those around him, rather than an independent figure in his own right.

So, I'm not saying he's useless, or should be donated to Marvel or anything. I'm just saying I don't understand how anyone can actually like Oliver Queen himself.

I await, without snark, any explanation my readers have!
Posted by Scipio at 9:50 AM 37 comments:

Well, it's the holiday shopping season! Time to brave the downtown crowds or shopping malls. Cheer up! It could be worse; you could be Batman... 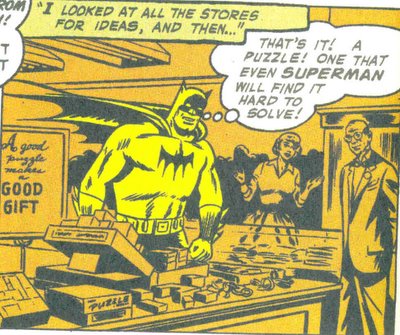 You think you've got it tough? Try picking a gift for someone who can turn lumps of coal in diamonds, particularly in the Gotham malls, which are crowded with depression-era street toughs and footpads shopping for bosses who will kill them if they don't like their gift.

"Pardon me, citizen; I was about to buy that item for my friend, the Man of Steel."

"Thank you, Boy Wonder, I know. Sir, I implore you in the name of all that it is decent -- yield that loot.

"Okay, buddy, I'm about to sic store security on you and yer 'boy wonder' if you don't back off now."

"It's alright, Robin; just a topical neurotoxin hidden in my gauntlet. He'll regain motor control before the mall closes. Quickly -- grab the muffs, chum; we haven't one moment to lose. "
Posted by Scipio at 8:02 AM 14 comments:

What "Green Lantern" is Missing

I really am enjoying the new Green Lantern series (probably because I'm a boring person; I'm told boring people like Geoff Johns's work). That's a big surprise to me because, let's face it, I'm not exactly known as a big Hal Jordan fan.

But there's something missing. It needs more scenes like these: 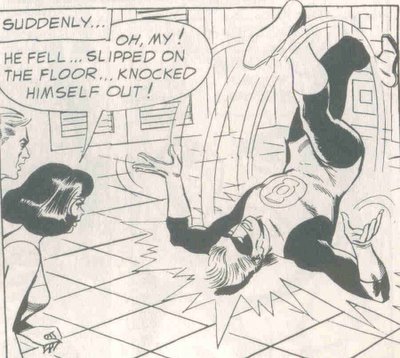 Okay, granted, this is a very good thing: 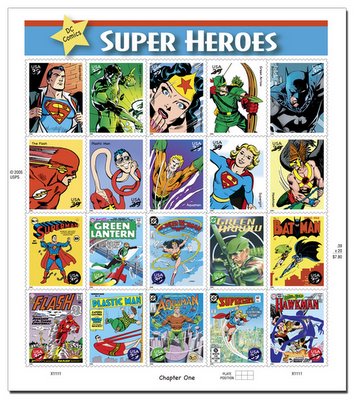 I know that this is the first page of stamps I shall have ever bought, and I will have it framed and on the wall. 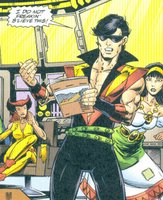 But I have to agree with Kevin ... 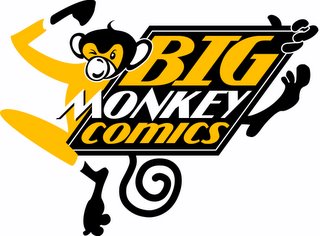 Big Monkey Comics is the chain of comic book stores that both Devon of Seven Hells and are I associated with. Actually, with only two stores I guess it's more of an, um, anklet than a chain, but you know what I mean.

Anyway, our website is up and I find it delightful and exemplary. The young folk tell me it's "dope", which I believe is similar.

If everyone who visits the Absorbascon would at least drop in to check it out, I'd be grateful (I'm going to add a link in my sidebar to facilitate that). I'm hoping you'll visit once because I asked you, but return there because you liked it.

It has some fun features, such as

Okay, I'll say it, since no one else will: I hated All-Star Superman.

Face it, Morrison's A-SS is full of crap. Oh, sure there are some 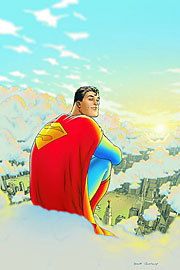 outstanding "left elbow" moments... the one-page origin; the gooberness of Jimmy Olsen, Clark's entrance to the Planet. But overall it was a relentless spewing of Morrison's ideorrhea, with giant test-tube babies, yoctospheres, "fear genes", and some scientist who's apparently the love-child of Willie Wonka and the Rainbow Raider.

Yes, the Silver Age was characterized by a proliferation of wacky ideas, concepts, and characters. But the Silver Age was mercilessly rigid in following through on the ramifications of those ideas. Everything was explained (usually in long expository balloons), and if there were Superboy robots, then by all that is holy you had to explain it every time Superboy didn't use them: "Ordinarly, I'd use one of my robot replicas to fool Lana! But they're all off performing super-rescues or in repair at the moment! I need another elaborate and unlikely plan to protect my secret identity before Lana opens that door!"

In short, the Silver Age had the mentality of a child: endlessly inventive but very strict and hidebound about rules. Makes sense, of course, since that's when comic books were still written for children.

Morrison's writing, in contrast to the Silver Age, shows ZERO interest or concern for the logical ramifications of the concepts that litter his stories like mental fewmets. Wait, wait, you're trying to tell me some whacked out candy-coated scientist is farming all manner of freakish slave-like sentient organisms using Superman's DNA and -- and everyone's okay with that? That's the kind of person Superman used to capture, not save! Forget all about Superman and Luthor; who cares about them, when this Dr. Moreau thing is the REAL STORY?

Morrison dazzles you all by throwing verbal paint on canvas and quickly moving to the next one, while you gasp and stare at the multicolored Rorshach test, groping for meaning when there isn't any. If it's one thing I've learned from my professional careers, it's that great ideas are extremely easy; following through on them isn't.

That's why I'm no longer impressed by Grant Morrison.
Posted by Scipio at 8:59 AM 42 comments: 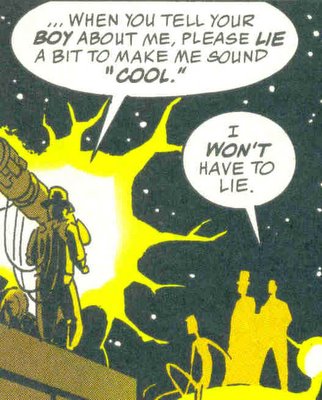 
What haiku of yours will honor the real Starman's death or replace Jack's reply?
Posted by Scipio at 7:26 AM 16 comments: 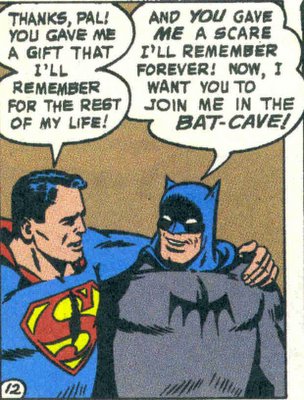 I am thankful Superman and Batman are no longer allowed to do public service announcements about sexually transmitted diseases. 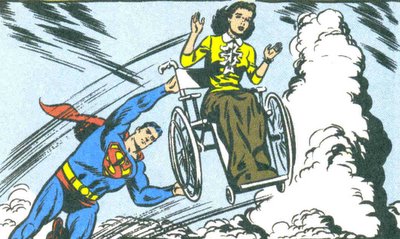 Face it, the Supermobile ain't a compact. Superman needs room to park that sucker and it must be conveniently located, because when you're a big-time hero, time is often of the essence. This means ... Superman takes Handicapped Parking spots. Because he can get away with it.

"Excuse me, sir, your supermobile is blocking the full access ramp and -- say, that's a handicapped parking spot!"

"Sure is, 'wheelie'; wanna make something out of it?"

"I'm Superman, sweetie; from where I sit, all human beings are handicapped and I can't tell the difference. Besides, without me, your planet would have been long since incinerated into space dust by one of the weekly comets I save it from.

Tell you what; I'll go easy on you. I'm going to toss you a couple miles away from here, but, because I'm such a nice guy, I'll throw you in the chair and maybe it'll help break your fall.

And if you're lucky you'll land somewhere near the crumpled up ball of steel and plastic that used to be your hydrolift-equipped van."
Posted by Scipio at 1:42 PM 2 comments: 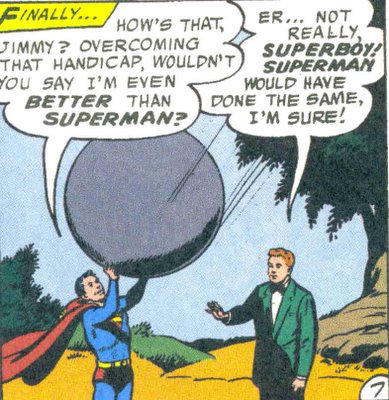 I am thankful I do not suffer from severe identity dissociation disorder.

Unlike Superboy, whose insecurity runs so deep that he competes ... with a future version of himself.

Even braindead fanboy toady Jimmy Olsen can barely disguise his disgust at Superboy's pathetic stupidity. Well... at least Superboy realizes it's a "handicap".
Posted by Scipio at 11:30 AM 3 comments: