The Fastest Tongue in the West!

Lesser humorists must struggle through with wit that is merely Shavian or at best Wildean. But some lucky few Americans are blessed with Hexian wit!

"Some day, when the frontier's a mite more civilized, women drivers is gonna be outlawed!"

Oh, he has a ruff and tumble exterior perhaps! But don't be fooled; Jonah Hex should be played not by a Clint Eastwood but a David Hyde Pierce!

"We wahr plannin' on leavin' soon as I finished muh strawberry shortcake!"

"We won ever' damn battle we wuz in! Cain't understand fer the life'a me how we managed to lose the whole blamed war!"


Politician: "I'm afraid this will mean a change in Washington's liberal Indian policies."
Hex: "Which one d'ya mean-- takin' their lands, killin' their braves, or starvin' their squaws and papooses?"

Eschew the cross-dressing antics of Milton Berle and Martin Lawrence in favor of ... Jonah Hex! 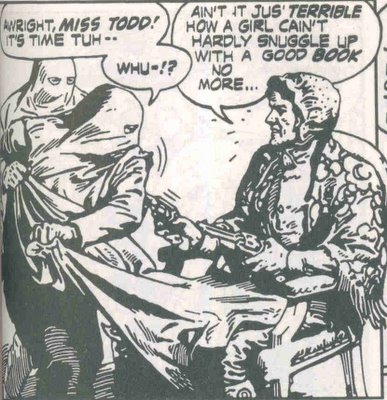 Don't read Jonan Hex for the enormous body count and frontier justice; read it for the knee-slappin' Western wit!

Really, folks, if you ain't readin' the new Jonah Hex or the Jonah Hex Showcase yer missin' out on a whole passel'a comic book goodness.
Posted by Scipio at 8:35 AM

Not Hex-related (though if people can, they should also - as well as the aforementioned Hex-stuff - pick up Lansdale and Truman's Jonah Hex: Two-Gun Mojo, if they can). However, something occurred to me while reading the solicits for this week's comics (particularly Nightwing).

Is the middle of a big, universe-spanning crossover the best time to start doing things differently to the way your character is iconically perceived as doing things? I mean, if they've got a big crossover and in Nightwing's book he's playing at being a villain or whatever, and he does it in the crossover, does it just make the crossover look dated and bad? Like, if Azrael was Batman or something. On the other hand, if he acted like Nightwing in the crossover, it might jar with his own book and whatever else he's being in.

So in short: If there's a crossover going on, suck it up and do the stuff for which your character is best known. I think. And I ask you, as I value the opinion of the Absorbascon.

Good to be here ;)
Congratulations!

There was a Jonah Hex Showcase out recently? :(