Come! Let us ejaculate together!

Holy ejaculations! There's nothing quite as comic-booky as those verbal outbursts, with their absolute construction and bolded lettering.

Verbal ejaculations are a natural part of our (and any) language, but the phenomenon blossomed in the 19th century when piety and prudity inhibited people from using the basics, Invocations of God and Swearing. That's when we got groovy sayings like, "Great Caesar's Ghost!", the ejaculation always on the lips of Perry White.

Another popular one in comics is "Great Scott!" Despite what frequenters of The Rocky Horror Picture Show may think, Great Scott refers not to toilet paper, but to General Winfield Scott (a hero of the Mexican-American War). 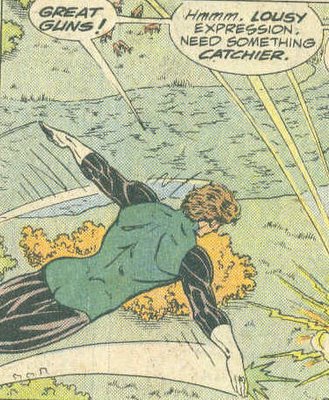 I used to think "Great guns!" was something that Green Lantern came up with. It's what he used to say before met his bosses, the Blue Non-Meanies, and learned that he was part of the Great Crossing Guard Patrol of Space.

After that, he started saying "Great galaxies!" or "Great Guardians!". Pompous Hal immediately leapt on the opportunity to remind the reader, hey, I'm not a mere local hero, I'm a galactic butt-kicker. Holy head-swelling ejaculations!

But in fact everybody says "Great Guns!" (at least, in my comic books they do). It was a favorite ejaculation of Golden Age heroes, like Superman and Starman. There are, to my knowledge, no recorded instances of Batman saying "Great Guns!"; I can't say I'm suprised.

So Hal Jordan wasn't the first person to say "Great Guns!"; he was pretty much the last!

In group environments like the JLA or the Superfriends, "themed ejaculations" become very important during the Silver and Bronze Age. Since characters' personalities and speech patterns were fairly interchangeable, they were distinguishable only through their powers and appearances. But allowing them "personal ejaculations" was a verbal clue that, hey, they actually are different people, after all. They may seem silly and insignificant, but those themed ejaculations were the first step toward giving those characters individual personalities -- personalities we now take for granted.

"Great Hera!", "Moons of Mars!", "Great Rao!", even "Great Gotham!" and "Great Lightning!" You know who's saying them as soon as you read or hear them. Personalized ejaculations imply individualized speech, differences in background lack that lead to differences in viewpoint, approach, philosophy, morality. Personal ejaculations sowed the seeds that grew into the iconic superheroes we know and love today.

An episode of JLU played on this. During a battle, Wonder Woman (who historically was probably the first big DC icon to start using personal ejaculations) cries out, "Hera help me!" Hawkgirl, annoyed, says, "Do you have to say that all the time?"

The moment wasn't just funny; it led Wonder Woman and Hawkman into conversation about faith, Diana's faith in the gods and Shayera's lack of faith. Up until that point in JLU, Diana and Shayera seemd pretty similar: flying ass-kicking chick-bricks. But that episode made you realize they were completely different people with divergent attitudes and worldviews. All because we all know that Wonder Woman shouts stuff like "Great Hera!" all the time.
Posted by Scipio at 5:33 PM

My wife watched JLU with me once and when she heard Wonder Woman shout "Great Hera" for the first time, rolled her eyes and said "oh, great, another 'Hera freak.'"

It made me proud.

One example I thought was pretty cool was when the Secret Society of Super-Villains fought the Crime Syndicate on Earth-3. One of Wonder Woman's favorite expressions was always "Merciful MInerva!" In this story, Superwoman, her evil Earth-Three counterpart, when Blockbuster flung a huge chunk of debris at her, cried out, "Murdering Minerva!" Illustrative of the differences between the Earths, ain't it?

And say, just what was Sappho suffering about? From what little I've been able to on the internet, she might have been a little uncomfortable, but suffering? Hmmm, doesn 't look like it.

She's suffering because her poetry was being censored in Patriarch's world. Note that Wonder Woman stopped using that phrase in the 80s? That's when the ban was lifted!

That's one thing I really enjoyed about 90s Legion of Superheroes and Lobo. Nonsense curse-words. Everybody knows what Frag and Sprock replace, but jsut having different words for it in outer space add color to a sci-fi series.

Perry White... always with Ceasar's Ghost... ejaculation... on his lips. Wow. That image will never leave my head, now. Way to go, Scipio!

Why is it that ejaculation always seems to follow Vibe?

To liven up a day at work, try to use a "themed ejaculation" in conversation or when surprised.

"So our projections for this quarter are looking poor."
"Great Rao! We'll have to renegotiate with our subcontractors!"

The best is from the X-Men's Colossus. Any situation is improved by the interjection of "By the white wolf!"

Wasn't Stan Lee the master of Silver-Age ejaculation though? Between Dr. Strange, Thor, and the Silver Surfer (not to mention "It's clobberin' time" -- not an ejaculation per se, but still memorable) ... what meeting wouldn't be enlivened by blurting out "By the hoary hosts of Hoggoth, that is a great slide!" or "By Odin's beard, I have never seen such networking!" or "Odd's blood -- who was supposed to bring the donuts?".

Tom; if you don't know that, you don't want an explanation!

Harvey: I've been using "by jasper" and "blue blazes" lately. Eventually I'll switch to some of the ones Aqualad used in the Filmation show, like "Suffering sawfish!"

Rafi; You can't use those easily in regular conversation; people just think you're a Ren-Fair Freak. You CAN however get away with "Great Caesar's Ghost!"

Simple, yet evocative. Brutal, yet elegant. Just like Conan.

In real life, Hal Jordan would probably say: "Fuck me!" instead of "Great guns." Often.

Being a teacher of special needs students, I have to watch my language. I've found myself saying "Holy..." (quickly thinks of alternative to the s-word) "...Moley!" or some variation, often. I think I'll mix it up a bit-

student: "Mr. Loughlin, look at this!"
Me: "By my father's bristling beard! That's a great Arthur picture!"
Or:
"Sufferin' cats! We need a band-aid!"

"Fuck me! The Chameleoids have turned yellow, the one hue against which my ring is worth total shit! Maybe, if I can somehow get closer to those asteroids, I can still save my space-ass!"

"Great googly-moogly" is a fine interjection. Comic-derived, I'm sure, but I forget the source.

The "extra" Anchorman movie, "Wake Up Ron Burgundy," had a fine one. "Spider-Man's Balls!"

Who can forget Gomer Pyle's "Shazam!"

Scipio: If I say "Suffering Sappho" at work -- well, I am not sure what would happen, but it wouldn't be pretty...

Actually, "great googly-moogly" is from a 1961 song "Goin' Down Slow"; it comes from the black jive slang "googa mooga" (made more widely known by the 1956 song
"Stranded in the Jungle" : I've always loved that song....).

Simon Stagg is a master of the Ejaculation. My favourite of his is "By the Old Harry!"
Although I do really like Metamorpho using the phrase "Blue Blazes!" and then immediately referring to the Taj Mahal's guards' swords as "Turban ticklers", by Jasper.