There are many wonderful and important things to see in this week's comics:
But do not let those blind you to the signficance of this: 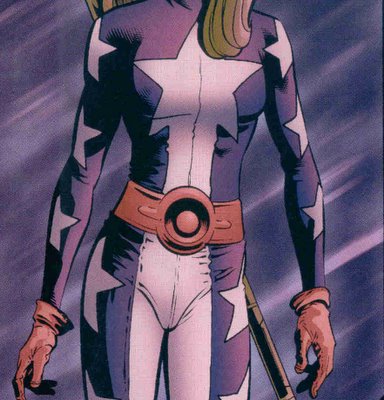 Oh, I'm sorry, I forgot; you won't recognize that image because you've never seen it before. It's Stargirl's midsection -- WITH CLOTHING ON IT.

Now, I'm pretty sure that "Courtney" (and the only reason I'm not making fun of her name is that, when your name is Scipio -- or worse -- you're pretty much disqualified from making fun of other people's names) started this whole "midriff-baring costume" plague that's infected the DCU.

I suppose when Courtney first appeared, she was young enough that it seemed "cute" or "innocent". Oh, but what is cute at one age can seem, well, trampy at another, and as Courtney has aged into adolescence she's been teetering closer and closer to Brittany Spears territory (so who's the DCU caped equivalent of Kevin Federline? Vibe?).

As it spread to Hawkgirl, Huntress, and *shudder* Supergirl it became clear: this is the kind of thing that happens to young superwomen who don't have proper fathers to keep them in line. Do you see Jade traipsing around with her belly button out? Huh, no, I don't think so!

Now, Courtney claims the costume change is just because "it's cold in the sixth dimension", but I'm confident that's just an excuse. She's gotten older and wiser and it's suddenly hit her while battling omnipotent magical beings, "I don't want to die in an I Dream of Jeannie outfit." Well, who does, dear?

But you and I know that the editors at DC have finally awakened after the, oh, 20 year sleep that Krona put them in, the one that prevented them from editing Wolfman's dialog in Crisis on Infinite Earths. And they are mad!

"Why are the Daughters of the DCU wearing cheerleading outfits and looking like 'easy girls' ? Let them be clothed. Now."

Bravo, ei in loco parentes of the DCU! I applaud your efforts to return decency to our super girls.

As long as Phantom Lady, Power Girl, and Wonder Woman remain as they are, of course...
Posted by Scipio at 6:23 PM

Is that the toe of a camel I spy?

I guess they felt they had to throw in the "camel faux" seam to make up for the added clothing. Now they need to get Huntress back in her previous (and much better) outfit.

I think it's more likely because of the attitude that bald guy in the comic was copping towards her. She realized she needed to look more serious.

But man, I cheered when I saw her cover up, too!

Speaking of Stargirl, did I just dream this or was her Jack Knight cosmic rod reengineered into a little piddly thing with a star shape on one end and a ring on the other in maybe one issue of a JSA miniseries? I can't even tell if I imagined that.

Coz if I didn't, wow, did they reverse that decision mighty fast, and rightly so. The hook-headed cosmic rod looks like something powerful and arcane. I may just be a little stuffed bull, but that was always what I was looking at, not her belly button.

Is it my or is the current JSA storyline just one of the most awful-boring-dragging-on messes ever?

Surprise me with the Earth-1 evil Johnny Thunder or something here folks. It just meanders on...

I can't get to the comic shop until Friday, so this is killing me: is that Kramer art? The body has the stiffly wrinkled detail I associate with his stuff, but the hair has a nice, bouncy Leonard Kirk quality. I just want to know what I'm in for. Either way, I wholeheartedly support the elimination of all "belly shirt" costumes. That "trendy" look needs to go on the trash heap next to Angar the Screamer's fringed vest.

(Awkward plug warning!) Oh, and speaking of superheroine costumes, I just did a couple of redesigns of the Marvel Comics Miss America character on my blog.

Like the redesign. The original costume worked in Stars & S.T.R.I.P.E., not so much in JSA.

Not seen in the picture is the Jack Knight-ish goggles on her head.

Yes, for awhile (Princes Of Darkness), the cosmic rod had a star-shaped head, which looked stupid.

Ah, you see this is just a first step. After Crisis2, the midriffs (midrives?) will be back, only this time on the men!

Of course, Hal Jordan will love to show off his sizzlin' abs, but the trauma of the experience is what finally puts Batman into Arkham.

"the midriffs (midrives?) will be back, only this time on the men!"

Throw me in that briar patch!!!

I like the new digs (mostly--those goggles look like she's trying too hard), but wouldn't the change have made more sense a few issues ago when the entire JSA was up against their Golden Age counterparts?

And where in comics did Vibe (whom I have never seen in comics for myself) show up? I promise to rush out and buy it, if only to show my support.


So which male DCU heroes would actually be able to pull off a midriff-baring version of their costumes? And which would be fun for comical effect?

I'm just a tad wierded out on the crotch details....

Rico, Vibe is in the most recent issue of Justice League Unlimited (see the previous post)

"So which male DCU heroes would actually be able to pull off a midriff-baring version of their costumes?"

Hawkman doesn't leave much to the imagination already.

I think most of the Green Lantern's could get away with it, 'cept for Alan who's a tad too dignified for that.

Huntress has a variation of her old body suit now in Birds of Prey and looks a lot sexier indeed.

(As well, in the DCU, as Jack Knight)

It can't work in fact, that is exactly what I believe.
used cars in dallas tx | carpet water damage | dallas zoo coupons printable

This won't actually have success, I think so.
Beef casserole with edam