You know, when you're comparing things in the realm of comic books, it can be very difficult to determine what's "most unrealistic."  Flying, invulnerability, heat vision; yes, those are rather inconsistent with our understandings of physics and biology.  But that idea that one of the world's richest and handsomest men would spend his nights dressed as a bat and beating up muggers in alley is psychologically unrealistic.  It all depends on your point of comparison.

Since this is Weather Week at the Absorbascon, our point of comparison is meteorology.   Weather-wise, Batman's Gotham City and Green Lantern's Coast City seem quite realistic given their generally understood locations.  Superman's Metropolis is much less realistic, thanks to a pretty substantial winter-deficit.

But unquestionably the prize for Most Unrealistic Weather goes to Flash's Central City.

Of course; it's always Central City, isn't it?  While Gotham and Metropolis are certainly odd in tone (Gargolyes! Bizarre transformations!), they seem functionally, structurally normal (for east coast cities).  But the incomprehensible geography of midwestern metro-nightmare-plex Central City is legendary; the impossibly tall buildings that are always impossibly far away on the horizon leaving nothing but gigantic empty plazas, mile-wide sidewalks, and uncrossably broad streets.  While Gotham City and Metropolis are normal cities dressed up in dramatic and odd costumes, Central City is completely otherworldly,  defying all the principles of space-time, architecture, and urban design.

And meteorology.  For quite some time, Central City has been consistently portrayed as a midwestern city.... WITH AN ALMOST TOTAL ABSENCE OF FALL OR WINTER.  It is always spring or summer in Central City.

It's one thing for Coast City to have no fall or winter; it's on the California Coast, so that's not unusual. But Central City is in the midwest, where there's winter; lots of it, in fact.  That Central City should be sprawling is at least consistent with what the midwest is like; that it should have no winter is completely unrealistic.

There is a reason, of course;  as always, reality bends itself to accommodate the Flash.  Central City has ridiculous geography for only one reason: it makes a better stage for displays of superspeed. Comics are a still-frame medium; there is no sense of 'time' other than the one we bring to it.  In a temporal medium (like a movie), you would show superspeed by reducing the time it takes for Flash to do something.  In comics, however, that's hard to convey, so the easiest way to 'shrink time' is
to  e x p a n d  s p a c e ; hence, the bizarrely expansive geography of Central City.

Similarly, that's why Central City (a midwestern city which should by all rights have BIG winters) has no winter.  Because in comics, the thing most synonymous with winter is SNOW.  And what's the main problem with snow?  IT SLOWS YOU DOWN.  Yep; you can't run in snow.  Snow would be a major problem in a Flash comic; so, Central City has no snow and the closest thing Central City has to Fall and Winter are the occasion attacks by Weather Wizard and Captain Cold. 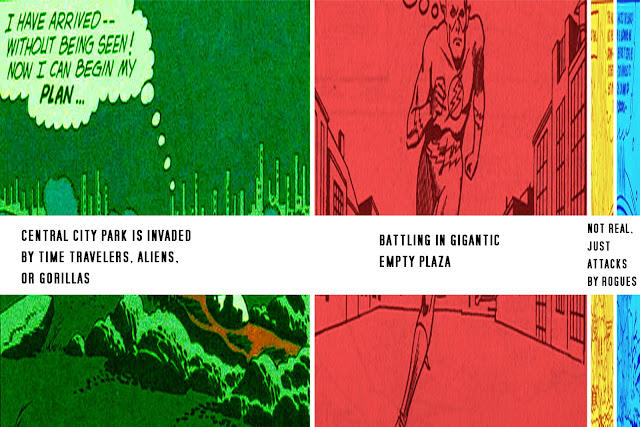 And, except when the Weather Wizard is in town, it never rains in Central City. That keeps anyone from making "Flash flood" jokes.

I would assume that since Central City IS in the midwest, an accurate depiction of it in the winter would be a completely white page...with a tiny flash of red.

On the other hand, it occurs to me, that Gotham must seem very claustrophobic to Barry or Wally.

That's probably why Barry and Wally don't venture to Gotham very often, Sally. They can't get up much velocity along the narrow crime-ridden alleys full of homicidal gunmen, and if they run up the side of a building, they trip on a damn gargoyle.

"The thing most synonymous with winter is SNOW."

but some depictions of Flash show that he can run on water. I dont see why running on snow is a problem.