This morning I read an announcement I've been eagerly anticipating for some time:

1960’s Adam West Batman: Will be getting its own Gravity Feed with approximately 12-18 figures. Release date TBD.

For those who can't translate that, it means:

Wizkids, the company that makes "Heroclix" (the comic book hero themed tabletop miniature game), is coming out with a small Heroclix set based on the 1960s Batman television series.

It hasn't been possible to create and market new merchanise based on the phenomenonally popular 1960s Batman live-action television series for forty years.  The licensing was all tied up.  But last year it was announced that all the necessary clearances had been gotten, deals were in place, and all was go.  Since then the older generation of Batman fans have been breathlessly awaiting a possible avalanche of ancillary merchandising.  Would the products be good or terrible?  Would decades of repressed consumer passion explode in a frenzy of Batmaniacal buying?  Or will an uncaring public shrug its shoulders, mystified at the sudden wave of memorabilia for a short-lived teevee show from five decades ago?  Tune in next week, same bat-time, same bat-channel.

That Wizkids, which has built its empire on its licenses for DC and Marvel characters, should take advantage of the opportunity comes as no surprise.  The question remains:  what will be in such a set?!

Batman, Robin, and Batgirl ("Yeah! Whose baby are you?")
The Joker, The Penguin, The Riddler, The Catwoman.

That leaves between seven to eleven possible OTHER figures based on characters from the show. Hm!


I hope for the sake of game play (and color) that there is generic goon to serve as cannon fodder on villain teams.  The villains of the show were famous for always having a small gang of goons, often thematically dressed.  There probably aren't enough figures in the set to permit individual goons for each villain (glorious though that would be). But I'm at least expecting and hoping for these guys: 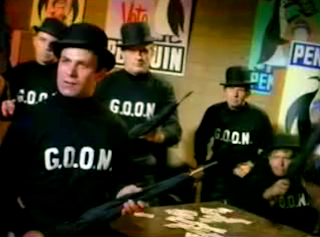 Vote for Pengy; he's our man.


The Grand Order of Occidental Nighthawks, baby!  Subtract the umbrellas and these guys will make the perfect fodder for powing, zapping, and kee-runking.  I hope to go with them there is generic Gunmoll, because they were essential parts of most of the episodes.  I know it's a small set, but I'll be very sad (and the figures will be less thematically playable) without Goons and Molls.

Will we get Supporting Cast figures for the heroes as well?  I can imagine a Commissioner Gordon figure and an Alfred figure.  Although, I'm at a loss as to what their dials might be.  Love those guys, but I'm not sure how well 'Displaced Hip' and 'My pills, my pills!' would translate as powers.  Perhaps Commission Gordon will get Incapacitate ("Melodramatic Speech to Camera") and Alfred would get Support ("Sandwiches, sir?").  I don't think comic relief characters Chief O'Hara and Aunt Harriet will make the cut.  I can't imagine them having anything other than, I dunno, maybe Perplex ("Impotent Outrage" and "Perpetual Befuddlement", respectively).

The REAL question is: other the obvious (the four members of the United Underworld: Joker, Penguin, Riddler, and Catwoman), will there be figures for other Special Guest Villains?!  Because that is where it gets juicy.

As fabulously fun as all the above figurse can (and will, I'm sure) be, we've already got clix figures for those characters.  Not the teevee versions, perhaps; but you can still make a Joker team or a Penguin team if you want.  What you can't do right now is make teams around the characters from the show that are completely unclixed in any way, shape, or form (e.g., King Tut, Egghead, Louie the Lilac, Bookworm).  Then there are the characters which existed before and outside of the show, but really only gained fame because of the show (e.g., Mr. Freeze, False Face, and the Mad Hatter).


Mr Freeze seems like a shoo-in.  He's well known in other media, he was on the show repeatedly, and designing a dial for him is easy.  Mad Hatter, same thing.

Bookworm only appeared once, but, well... it was Roddy McDowell FTW.  Besides who else in the set could get Barrier ("Giant Cookbook at 5th Cedar!")? Milton Berle's Louie the Lilac appeared twice, but his only obvious power is Mind Control ("Stupefying Aromatic Spray from My Boutonniere"), which would be too duplicative of the skill sets of Mad Hatter ("My Super Instant Mesmerizing Top Hat!") and King Tut ("ABU RABU SIMBU TU!").  Shane, dullard though he was, actually carried guns, which is darned threatening for a Batman teevee villains (unless you're carrying your Bat-shield).  False Face's powers (Shape Change and Perplex) are just too passive-aggressive to make a good gamepiece and while the Minstrel might have some interesting abilities based on his expertise in sound and electronics he would still be too much of a support piece. I mean, the Minstrel never even fought; even the RIDDLER at least tried to fight.

What do you want to see in such a set?

I doubt this would make the initial cut, but vehicles. That Batmobile set the standard by which all other Batmobiles are judged. Ditto the Batbike. Then, of course, you'd need the Batboat and Penguin sub for water-based action. I've only dabbled in Heroclix a tiny bit, but I'd jump on this set.

Well,Bryan, they have already made the Batmobile and the Batcycle. Now, they are modern versions that don't like the ones from the show. But my engineering team fixed that right quickly, by drilling appropriate holes in my Corgi Batvehicles so I could put whichever ones on the dials I please.

God, I would so love a King Tut figure. He had to be one of my favorites...after Frank Gorshin as the Riddler.

But you just can't have too many goons. Has there ever been a comic book written from the point of view of generic thug? I would have to think that these guys might even have a union or something, and bounce around from super villain to super villain, depending upon who is out of jail or Arkham at the moment.

Actually, I think there have been, Sally. I want to say Gotham Central, but I'm not certain and I'm not where I can check. I'm sure the whole "sign on with the currently available villain" bit has been done.

"Now, they are modern versions that don't like the ones from the show."

Scipio, this is the point where your argument breaks down for me. Sorry, but for some inexplicable reason I'm crazy about the '66 vehicles. I will accept no substitutes and will not order my engineering team to duplicate your (admittedly clever) solution with my Hot Wheels or Matchboxes (I would never damage my Corgis).

I meant to type "AREN'T like the ones from the show".

Sally - There's a pretty terrific issue (#8) of the 1980s BLUE BEETLE series by Len Wein that's about a generic henchman working for Calculator, of all villains.

I want some cross-over action with the Green Hornet and Kato.

Astro City has done a couple of goons-eye stories over its time.

What do you have against Marsha, Queen of Diamonds that she's less likely than some of the one-appearance foes?

The Siren and Liberace.