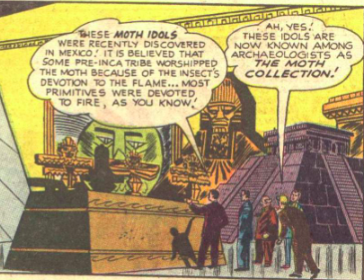 So, when last we left Batman and Killer Moth, they were, in their civilian identities as museum boardmembers Bruce Wayne and Cameron Van Cleer, voting to purchase $200,000 of pre-Incan moth idols. 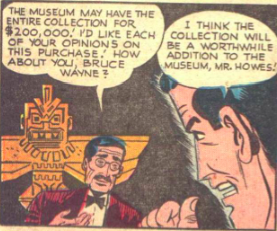 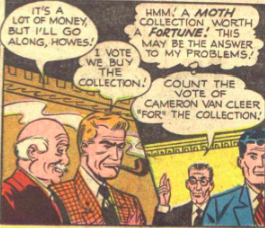 Pictured, from left to right:


Homer Forsythe; enjoys sexytime Captain Kangaroo cos-play.
Perry Winslow; currently has a pickle in his rectum.
Cameron Van Cleer; is in a codependent relationship with the entire Gotham City underworld.
Bruce Wayne; keeps an underage boy in a cave beneath his house.


Except for some symoblism in late Ottoman poetry (which really doesn't count because those jaded sybarites would write about anything), there is NOTHING.  Because it's not just the Gotham City underworld that doesn't care about moths; apparently, in the entirety of human history no one has ever worshipped moths.  Except Killer Moth. 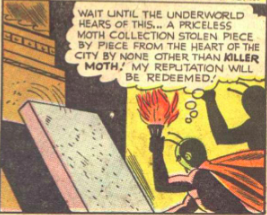 Because there's nothing that impresses the criminal element more than stealing wholly unfungible pre-Incan moth idols.


I'll admit; when you're a moth-themed villain and some highly unlikely moth-themed valuables turn up in place you already have the keys to, that's a hard thing to pass up.   Particularly when you're as bone-stupid and desperately needy to prove yourself as Killer Moth is. 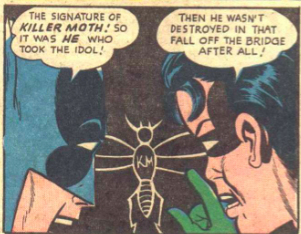 For someone as into branding as Killer Moth, you'd think he'd shell out some dough for a better logo.


But the ONLY people who know where the moth idols are--or even that they are at the museum-- are the five museum directors. 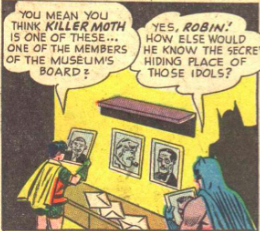 Even Batman, world's densest detective, can figure out the thief is one of them. 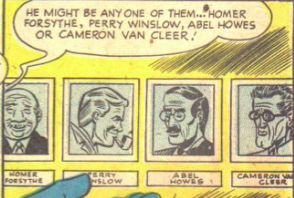 Really, Batman? Then I think you should focus your investigation on the fat old jolly guy.


Once the theft is discovered, the museum directors have a meeting to figure out how it cover it up. Because Gotham City.  Meanwhile, the otherwise irrelevant Prof Perkins exposits to Guard Rollins that "I'VE FINISH X-RAYING THOSE REMAINS OF THE TWO BATTLING NEANDERTHAL MEN AND NOW I'M LEAVING THE STORY!" 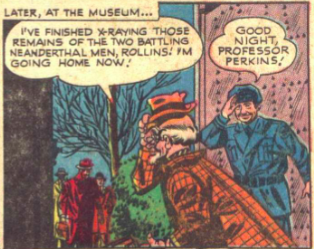 "Be careful of that gun, Guard Chekov!  We wouldn't want that go off in the Third Act!"

By the way, at the meeting we learn that each of the museum directors was personally responsible for the $200,000 "Moth Collection" until the museum could make the purchase.  Which means, really, that Killer Moth, instead of making a brilliant coup, just cost himself $40,000.  But I suppose that's a small (additional) price to pay for the glory of being Killer Moth.

In the middle of the meeting, Wayne and Van Cleer go off to the dark parts of the museum to put on leotards and jostle, while the others putter about characteristically. 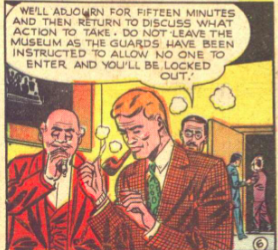 Forsythe:  "I call my wife 'Bunny Rabbit' and my gardner "Mr. Greenjeans" *giggle*."
Winslow: "Damn.  Pickle slipping.  Must smoke this vetch to remain dour."
Howes: "Wait for me!  I'm not colorful, but I am instrumental to the plot!"

So, as Mr. Howes' dialog makes achingly clear, this museum is now a "locked room". Which means, that without a doubt, the absolutely stupidest thing that Killer Moth could do right now, during the fifteen minute break would be... 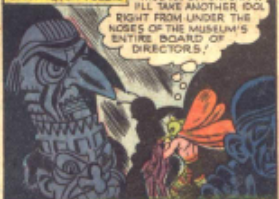 Actually, I'm just impressed that he can change into that costume in under 15 minutes.
Or at all, really.

William F. Kirby, man, you're dumber than a dung beetle!  But at least we're now set up for an EPIC STRUGGLE between Batman and the Killer Moth... in under 15 minutes!!! 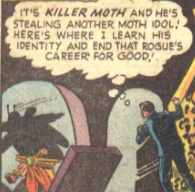 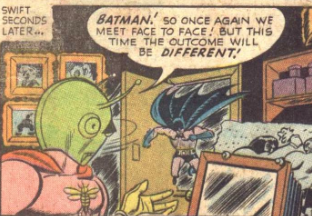 Yeah, maybe this time he'll break your arm instead of your ribs. 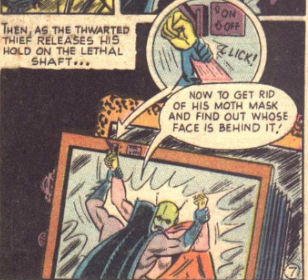 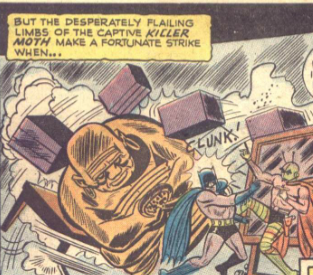 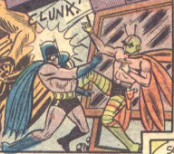 HEY, TEENS AND TEENETTES: DO THE MOTH!
Desperately flail your limbs like you just don't care...! 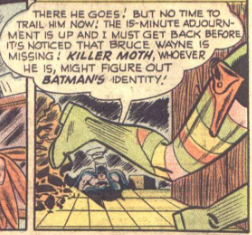 A close-up of Killer Moth's leggings.  Where's Lichtenstein when you need him? 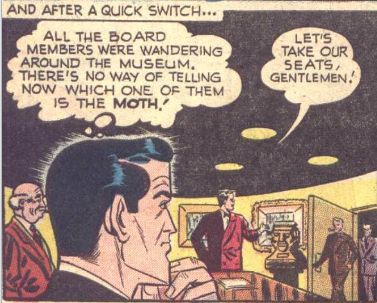 No way of telling, Bruce?  Why not just punch them all in the ribs and see which one screams like a little girl?  That's what Sonny Blandish would do. 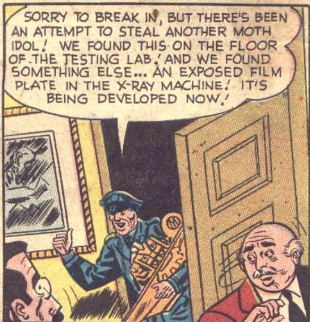 
So, riddle me this, kids: howcum no one ever suspects Guard Rollins? Anyway, it seems the "click" we heard above was one of Killer Moth's desperately flailing limbs activating the x-ray machine in the museum lab. Which is a problem because "Identification can be made from an x-ray showing the skeleton! This might reveal the identity of Killer Moth!" 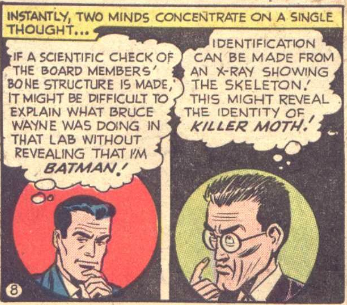 Yeah, all they have to do is spot the broken ribs.


How on earth will Killer Moth AND Batman get out of the corner they've (very stupidly) painted themselves into....? If only we had some clue...!

Uh, it's been your testimony in earlier essays that NO form of stolen goods is unfungible in Gotham City. I'm just sayin'. ;-)

Yeah, I was thinking about that, actually.

If there IS an exception to that rule, it would be pre-Incan moth idols.

Apparently, flailing requires the deployment of an additional wing, because I count five in the flailing scene. This is probably why flailing never caught on among the young folks. As far as I know, you don't need wings to jitterbug, though they could prove helpful.

And there, in a nutshell, is the problem with Killer Moth. He's just too damn complicated. Costume, logo, schemes, dance steps. He's always going over the top.

So KM escaped because Batman was accidentally struck in the head?

Methinks Bats has been hanging out with Hal Jordan a bit too much....

Hey World's Greatest Detective ... if you don't want your secret identity to be compromised, how about you refrain from jabbering on about it right in the presence of Killer Moth?

Thanks for sparing us a clever comment about "...Then as the thwarted thief releases his hold on the lethal shaft..." despite the excellent alliteration.

It woud have seemed a little beneath you.