So you remember how I said they changed Killer Moth's backstory and there was no mysterious missing story to explain it? 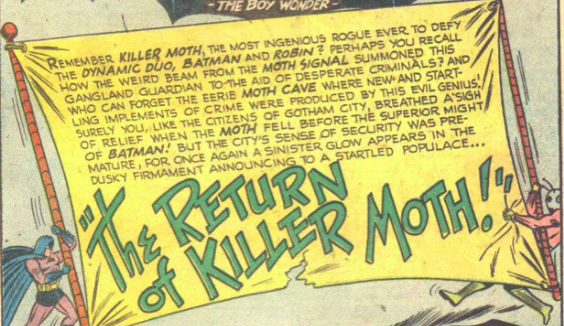 
So clever am I, like the amazing Killer Moth!  Is it not glorious?  If you were real Killer Moths fans, you would have seen through my ruse.  But you are not real Killer Moth fans; almost no one is!  And for that the punishment is: KILLER MOTH WEEK II.

Yes, it's a madcap melange that's not to be missed. Milk; chess; cavemen; giant blacklight bulbs; pre-Incan idolatry.  This one has it all, folks.

*Actually, one of you was not fooled.  Kudos unto him.
Posted by Scipio at 9:49 AM

"The most ingeneous rogue to ever defy the Dynamic Duo"?

Wow! There really were no truth in advertising laws back in the day, were there?

Thanks for the Kudos. I have to give credit to the Batman wiki, which let me know something was up

"...when the Moth fell before the superior might of Batman!"

Woah, woah, woah...didn't he fall to the superior might of Whitey Case's machine gun dose of insecticide?

No, that was the THIRD story, Misfit, which I FOOLED you into thinking was the second story.