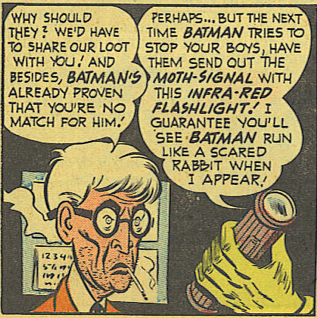 In France, Whitey Casey is more popular than the Joker, you know.


Fortunately for Killer Moth this opportunity presents itself the very next night.  Now, if we wanted to be kind, we'd assume that Whitey has told Killer Moth what his next 'job' is, and that Killer Moth, as "Batman" therefore arranges to run into the Casey Gang on patrol.  But, well, we're not kind, and it's not true.  It's achingly clear from the dialog that, no, in fact, Killer "Batman" Moth and Robin just coincidentally happen upon them. 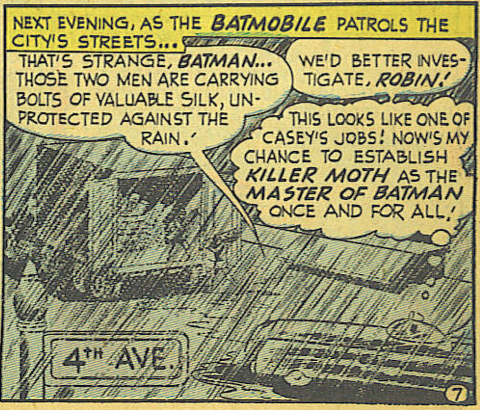 Robin can identify a bolt of silk from inside a car during a pounding rainstorm.  And they call me gay.

Where's Hugo Strange when you need him? " Hm. Silkworms.  Cocoons.  I zee.
I tink maybe your zubconsiouz is trying to tell you someting, Boy Vunder!"


"Batman" makes good on Killer Moth's promise and when Whitey Casey uses his 'mothsignal', his pursuers back off.

Hey, it's just like the restaurant scene in Mrs. Doubtfire. Except funny.


But Whitey Casey, who's so dissolute he gargles with absinthe, ain't buying.  Hilariously, the worldly Whitey still finds it non-credible that Batman was scared off by Killer Moth, because... because Killer Moth. 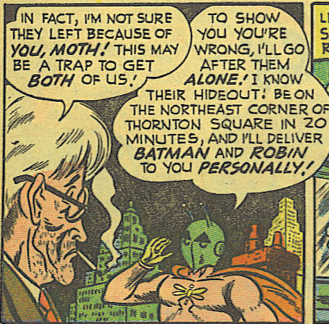 
This is the point where Killer Moth should say "bugger off, Casey," realize that trying to build up the "Moth" brand is way more trouble than it's worth and just skip town with all of Bruce Wayne's money and Vicki Vale on his arm.  But the most important thing to Killer Moth, as we've established, is BEING Killer Moth, so he's got to escalate his escapades by promising to deliver Batman & Robin to Casey.  So quick-changing back into his Batman outfit, he drives to Robin to the vault where Bruce Wayne is trapped... OR IS HE?!?! 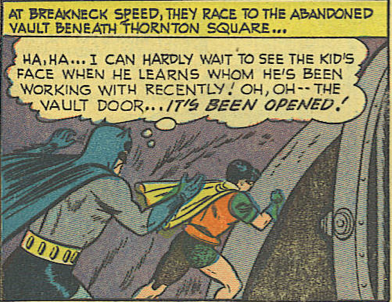 Well, of course Bruce Wayne escaped, you ninny. One; he's Batman; why didn't you go back and shoot him the second you discovered that?  Two; bank vaults are designed to keep people OUT, not in.  You'd probably know that if you'd ever tried robbing a bank, instead of cos-playing your "Killer Moth" fan fic character. Bruce managed to escape by--well, it's easier to let him explain it:

And just exactly how many days did it take you to notice the hinges, MacGyver?  Sigh.  He probably spent two days rummaging through the safe deposit boxes for materials he could use to build a primitive radio transmitter using the bars as an antenna, rather than just take the damned door off.


So, when KM finds the vault empty, he needs to improv fast.  Forgetting which end of the gun actually does the work, Killer Moth knocks out Robin just as he's asking the eternal question, "HOW MUCH LONGER ARE YOU GOING TO KEEP UP THE MYST..." 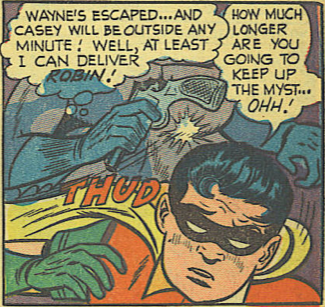 Smart money's on Stoneship. And I'll lay 3 to 1 against Channelwood. 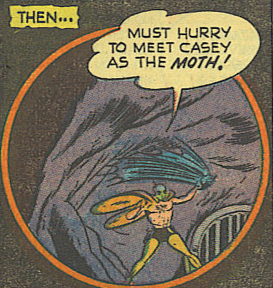 These change scenes would be so much better with music: here.


But, MEANWHILE, the REAL Batman comes upon Whitey Casey (and you know he's not the first). 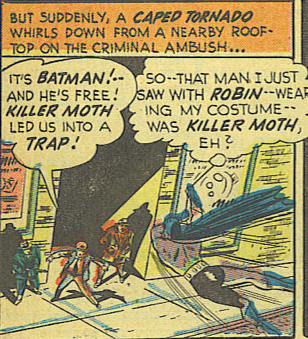 "It's Frasier!  But Niles told us that Frasier went with Martin to the baseball game!"


Naturally, Batman takes barely a panel to beat the crap out of the Casey Gang (I mean, really; they're silk thieves), then dashes off to follow Robin, whom he's deduced Killer Moth has taken to the same vault he just escaped from.

Sure enough, Kidnapper Moth has locked Robin in the vault.  Which, if you think about it, means that the very first thing Batman did when he broke out of the vault was... re-attach the door.   Way to go, Mr. Monk.

Of course, by now, Robin realizes that he's been dealing with a fake Batman all along, so when the real Batman comes to the rescue, Robin attacks him. 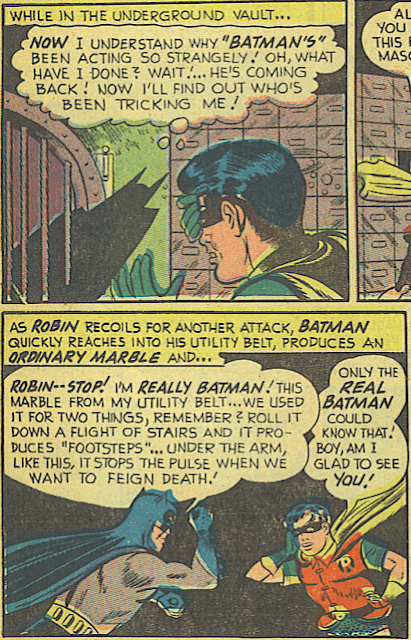 "Dr. Crane?! What are you doing here? Your brother said you took Mr. Crane to the baseball game!"


Batman proves his identity by spouting one of those stupid unrealistic Hero Hints from Heloise that he was so fond of in the Golden Age: "...then the racing stripes come out nice and straight!"  "Yeesh, only the real Batman would care about something so stupid in the pre-internet era."

Meanwhile, Killer Moth makes the only smart decision in his career. 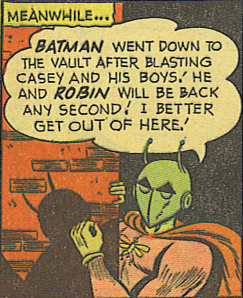 
Whitey Casey, however, does his best work lying face down, and, believing that Killer Moth double-crossed him, uses the machine gun that Batman apparently didn't think to confiscate.  Probably too eager to rush back to make sure his patch job on the vault door was still holding up. 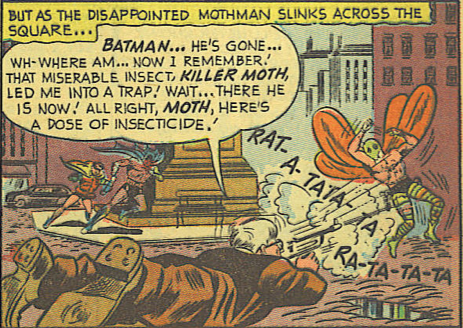 "Here's a dose of insecticide!" HA, HA!
Yeah, I demand the return of Whitey Casey, along with Sonny Blandish. 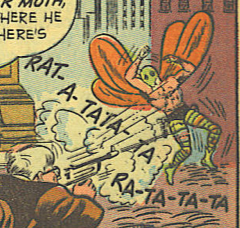 
And you just know that, as each bullet ripped through his body, all he can think is, "My KILLER MOTH COSTUME!!!!"

Naturally, this leaves us with the classic comic book irony of "Batman must save the life of the person who can end his career if he survives".  Yawn. 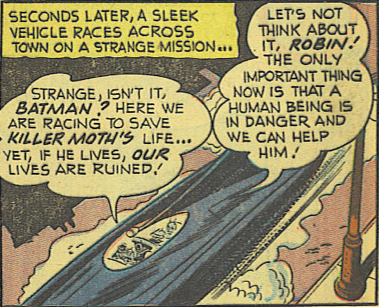 "Um, Batman; are you sure we don't have a hospital in the trunk?  I think we do."

They reach the hospital, and... 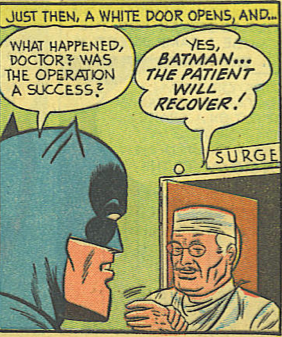 GOOD LORD, SONNY BLANDISH IS ALSO A BRILLIANT SURGEON.  Of course he is!
That door, by the way, is not white.


So, Killer Moth was shot up by over 9000 bullets, but at least they were all in the legs and torso.  I guess that's why he survived.  Clearly, Whitey wasn't able to aim for his head (that would be nearly impossible from Whitey's angle, lying on the ground as he was). 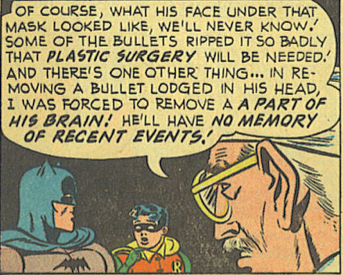 
Wow. I mean, I'm not surprised Dr Sonny Blandish has identified the exact portion of the brain entirely responsible for your memory of the previous week (he is Sonny Blandish, after all).  But facial reconstruction AND amnesia by gunfire?  Screw you, Joe Biden, I need a gat stat, because those things are MAGIC.  Once AGAIN, Batman's life/identity has been saved by guns.

I am so going to make a Whitey Casey action figure. I'm not even slightly joking.

Am I crazy? On both the shot of Killer Moth changing costume, and the one where Whitey is riddling him with bullets, that pink top and his moth outline are so fuzzy that he looks like he's topless (I guess he could actually be topless during the quick change, which makes the fact that his wings are on really strange). Anyway, with those tights, the whole thing has a very "Magic Mike" feeling to me.

Rather than make a clever quip, let me just say that you and the Absorbascon are not just my favourite comics blog, but my favourite blog, period (sorry, Ezra Klein and Paul Krugman).

I know these posts are hard work on your part, but I love them.

THanks, Andrew; I appreciate more than you know.

Seconding and thirding what Andrew said. When there is a new Absorbascon post, it's pretty much guaranteed to be a good day.

About those magic guns: could it be that guns have a collective desire for Batman to exist? I bet Joe Chill didn't even plan to mug the Waynes until the gun convinced him to. It would also explain how guns have such a poor track record against a guy who, for most of his career, had no armor whatsoever against bullets.

... But wait a minute. In that last panel, the doctor's making like nobody knows what Killer Moth looks like beneath that mask. I could have sworn that they spent the first part of the comic trying to convince us that KM had been unmasked in his first adventure. I smell editorial meddline.

Even though Killer Moth has amnesia, he would see upon awakening that he had Bruce Wayne's face instead of his own.

Remember that Killer Moth has had his face altered to resemble Bruce Wayne. The writer is trying to make it clear that Killer Moth's face was badly enough damaged in the shooting that no one can recognize that it was Bruce Wayne's face any more, meaning that Batman's identity is safe.

I think Dr Sonny Blandish has decided to preserve Batman's secret identity by doing medically unnecessary surgery, and is trying to tell Batman "Don't worry, I got this," without, you know, explaining that he already knows Batman is Bruce Wayne.

Oh, I like that theory. Because of course he already knows Bruce Wayne is Batman; he's Sonny Blandish.

OK, and, if you'll notice, Dr. Sonny Blandish, Millionaire Doctor Aviator, was pictured in an article about a Charity Boxing event. So, also dangerous as a hand-to-hand combatant. Am I crazy or does this have "New New 52" written all over it? With his sidekick, Bruce-Campbell-jawed fellow millionaire Jock Forsythe (the Most Interesting Man in the World's older, more worldly brother...), against the forces of fashion-thief dissolute anti-hero Whitey Casey... hold on, I have to go write up the treatment for this...

Yeah, forget "Batman Inc." Morrison should have established a new Green Team of adenturing millionaire polymaths(Jock Forsythe! Sonny Blandish!Unnamed Blond Guy! And Bruce Wayne!), where Bruce Wayne appears to be the boring one.

I've occasionally wanted to see an Elseworlds where Thomas and Martha Wayne weren't killed, so Bruce Wayne grew up without major tragedy, and is a slightly bored socialite who enjoys solving crimes in his ample free time. (Because he's a decent-hearted guy and wants to give something back, he tends to help those who couldn't otherwise find help.) His gimmick: he's a blackbelt in karate, and is capable of taking on one, maybe two thugs at a time!

Every now and again he feels like there is more he should be doing with his life, so he writes a check to an orphanage, and feels a little less unsatisfied.

Anyway, that Bruce Wayne would be perfect for this new Green Team.