When we last left Killer Moth, he placed Robin in perhaps the least reliable death trap ever: a moth-themed Conical Pendulum of Doom.

Then he makes Batman accompanying him on a drive.  Well, it's more like a date, really, because Killer Moth, who has been hiding 'Batman lore' under his mattress for years to get him through those lonely prison nights, is still rather a smitten fanboy: he wants to see the Batcave.  Essentially, he makes Batman take him for a drive and then back to his place (the BatCave), no doubt to view his etchings in the Trophy Room. 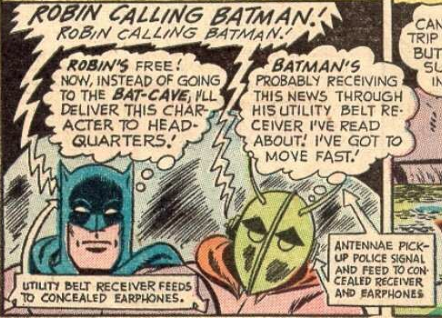 Here they are, listening to the radio in the front seat of Batman's love mobile.  You have to admit, they are a cute couple.

Of course, what neither realizes is that this is actually their second date; they just had dinner together in their secret identities.  Wait, this is familiar somehow.  Killer Moth extorting a member of the Batfamily to go on a date...? Oh, yeah!

Having lost his advantage as Robin's captor, Killer Moth jumps out of the Batmobile and, instead of totally getting away from the befuddled Batman, decides to play a game of tag with him.  What a different world we might be living in if KM had had the wisdom to run away to fight another day.

By the way, I skipped what felt like 23 pages of tedious scenes of Batman driving around the city with KM and Robin trying to escape the Langrangian Death Spiral, and grabbing a bottle of sulphur between his legs, and somehow sulfuring his way out of the trap, in such a way that he was blinded as he's left the Mothcave and crawled back to police headquarters.  He's not called the Boy Wonder for nothing.  The whole point of the convoluted escape was so that Robin could get OUT of the Mothcave without knowing where it was.

Killer Moth truly is Batman's counterpart, because both think in the same high unnatural way. Rather than escape when Batman has no idea where he is, Killer Moth taunts him and runs up a bridge cable.  Batman, rather than just calling the cops now that Killer Moth has foolishly stranded himself at the top of a suspension bridge and starving him out, climbs up after him.

Some of you are thinking, "Well, he's seen Killer Moth zooming through the air, so maybe he thinks Killer Moth can glide away to escape or something."  Well... 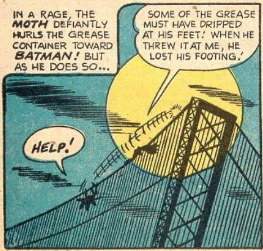 How sad.  When the Joker makes falls like that, he NEVER calls for help.  He goes out laughing.
HA, HA! 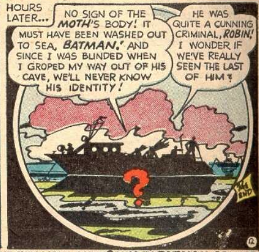 So Killer Moth plunges to what any comic book reader knows is NOT his water doom, with the Lagrangian Dynamic Duo not having learned his identity, all the better to return to taunt them another day.

Tomorrow, in fact!  But before then let's recap...

After years of preparation, Killer Moth gets one and only one gig.  He then gets his ass kicked and is disarmed in mid-air by Batman. He does manage to capture B&R through some Mothmobile trickery, but blows it by leaving Robin in an overly elaborate, easily ruined death trap.  Then, instead of escaping, he has Batman chase him up a bridge cable which he promptly falls off of thanks to his own grease gun.  In fact (except for the death trap and shooting at some cops), Killer Moth hasn't even pulled off one successful crime.

Hm; so far Killer Moth is a great concept but poorly executed, since this is not the most auspicious beginning to the anti-Batman's career.  Perhaps it will get better tomorrow, since how much worse can it get?
Posted by Scipio at 8:00 AM

I dunno, back then there probably WERE a few one-shot super-villains whose stories ended in a watery doom and, since they never returned, could reasonably be presumed to have in fact drowned (I mean, not taking Crisis, New 52, etc. into consideration. Not in this case, obviously, but it's an intriguing potential field of study.

Not unlike the case of Joe Coyne. Although I can't guarantee it, it seems likely that more than one relatively big-name super-villain has at some point been announced to be getting the chair at the end of one story, only to inexplicably return in a later story (well, not INEXPLICABLY, death sentences DO get overturned now and then, but I'm sure you take my meaning).

'Cause sometimes, when you're an EXCEPTIONALLY "lame" criminal, your first caper TRULY IS your last. Poor dopes. Sad, really.

I always wondered where the writers of the finale of The Fugitive got the idea to have the one-armed man tree himself instead of just running. Now I know.

Please re-read and notice the word "probably" this time. :-)

Oh, but I want someone to try and find an example. Because I would be very amused to find that there aren't any.

My son and I got the video game Lego Batman2 for Christmas. He lost interest when it got confusing on one level. I kept playing... snd playing... and playing. Eventually, you can buy additional characters for when you redo levels. Not just the Justice League mainstays or well-known Batman & Superman villains, either; there's Captain Boomerang, Black Canary, Huntress, Mad Hatter, and...

I'm not a gamer, but I enjoyed the heck out of Lego Batman 2. Killer Moth being playable, though, might make it the best video game of all time.

The river is 1000 feet below the bridge? Does Gotham really need 100-story tall bridges?

Yes, they do. It keeps the New Yorkers in the DC Universe from getting all uppity.