So, armed with the Mothcave, the Mothmobile, gun condoms, and all manner of mothophenalia, Killer Moth is now fully equipped for his debut.

But it's not like Batman's situation.  He can't just lurk around town waiting for crimes to happen.  Not in that outfit.  Besides, his is a sales model; he needs cheap crooks who are (a) incapable of dealing with the GCPD and (b) not so cheap that they won't fork over some money for Killer Moth to rescue them.  So he sets up a keynote speech for his new product (I,KillerMoth) at a local hive of scum and villain.  Fortunately, while it's not that large, it's large enough to hold the small number of cheap crooks in Gotham City who are incapable of dealing with the GCPD. 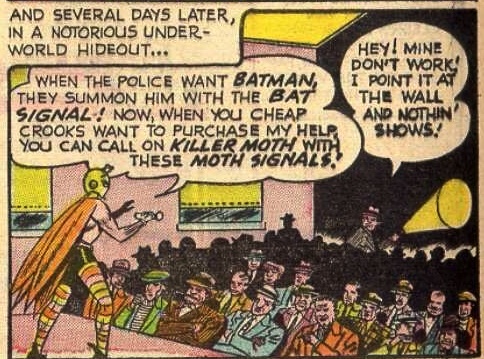 
Yeah, he just called a roomful of Gotham gangsters "cheap crooks", while dressed in that outfit.  I tell ya, the man's got some major mothballs.  Still, the audience is surprisingly receptive.  You can tell by their body language: arms folded, hats on, talking to one another.  Oh, and there's Benny the Bookie, taking bets on whether Killer Moth survives to finish his entire presentation. 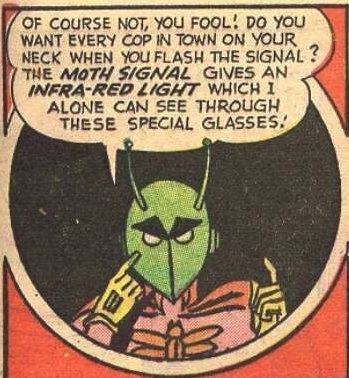 
Actually, KM does have a great moment in his presentation: when these hardened Gotham criminals ask about their biggest fear and Batman's biggest advantage: ROBIN THE BOY WONDER.

His answer couldn't possibly be improved upon: 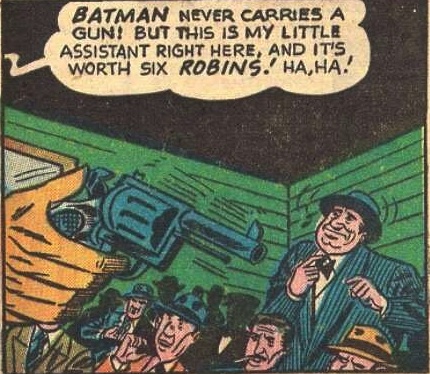 Say hello to my little friend!  Oh, that's how Killer Moth is so confident he's going to survive smack-talking a roomful of Gotham hoodlums: they're all afraid of GUNS, because, well, Batman will beat the crap of them if they carry guns.  So, basically, Killer Moth is going to carry a GUN. Plus, he promises he's going to shoot Robin.  Repeatedly. Heck, if this were the current issues of Batman & Robin, I'd pay him to show up and do that.

I mean, it's not exactly on the level of spelling your name in an acrostic of crime across the city, but, hey ... it's a plan.

Obviously, with salesmanship like that, the Moth's business is going to be off to a killer start. 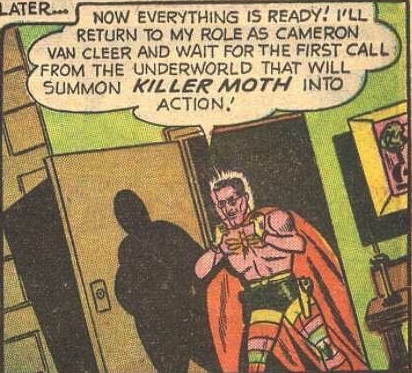 I'd bring a book if I were you.


Turns out it actually happens; some cheap crooks mix it up with the boys in blue and both Batman and Killer Moth are called into action at the same time.  Naturally, Bruce Wayne and Cameron Van Cleer are having dinner together at that very moment.  In a restaurant with very big windows so that they can see their respective signals.

Then there's what feels like 47 pages (which I'm skipping) of Batman and Killer Moth going through parallel preparations to go into battle.  Because (1) the writer will get you to understand that Killer Moth is the anti-Batman and (2) comic book irony. 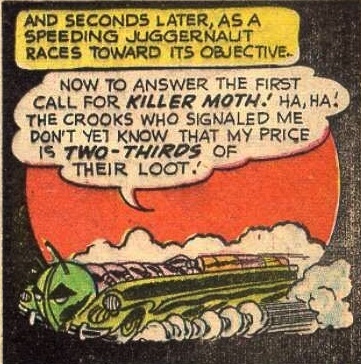 
Remember, criminals; before you make that service call, beware of hidden charges!  So, even with a cut of two thirds, how many of these calls do you think it takes to pay for something like the Mothmobile? Or for the gas, even?  Because that car is about, oh, forty feet long.

Anyway, having parked the Mothmobile god only knows where, KM finally makes his big debut, zooming in on the scene from above on a steel strand (rather than Batman's "silken cord"), his guns a-blazing.

One thing you gotta give Killer Moth: he loves his job. 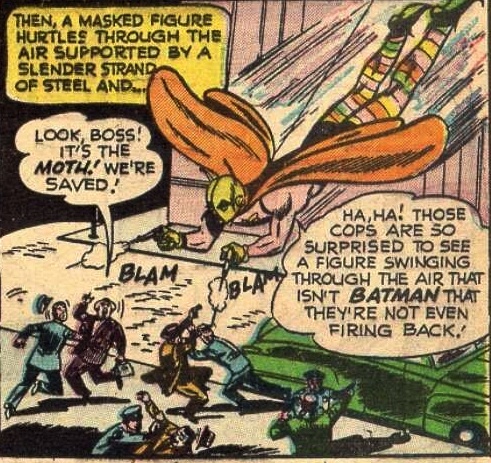 Killer Moth assumes the cops are surprised to see him swinging in from above. But really, they're probably just thinking, "WTF is that guy WEARING?!"  Because the real terror of Killer Moth isn't that he'll kill you; it's that the last thing you see before you die will be Killer Moth.

Let's see; if Killer Moth shoots those four cops he'll have a bullet left each for Batman and Robin.  Or, if we're lucky, two for Robin.


NOW is the moment.  The one Killer Moth has spent YEARS preparing for.  All that study in prison.  All that money spent.  All the time in the gym and the lab.  Batman's about to get MOTHED, baby. 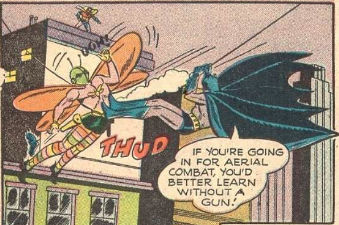 Huh.  I guess the sound of the "UGH!" and THUD are drowning out the sound of Batman cracking Killer Moth's spine by kicking it into a 90 degree angle.


So much for Killer Moth's 'gun advantage'.  Joe Biden, I hope you're taking notes, because that's how we handle gun control in Gotham City: by snapping people's spines in mid-air, leaving them to dangle, crippled, over the middle of the street from a steel cable, wearing a really really gay owl costume.

HA! HA! I fooled you!  I was just kidding.  Killer Moth's back isn't broken.  I can't believe you actually thought they'd break someone's back in a Batman story! 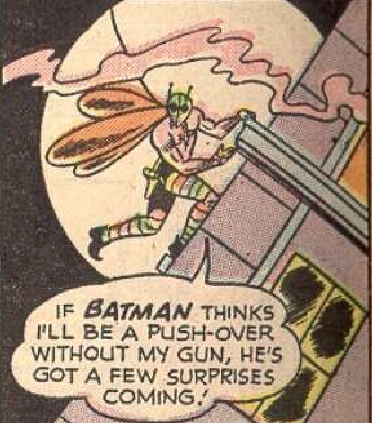 Killer Moth proves quite resilient and resourceful as he escapes in the tricky Mothmobile, which he uses to then blind and anesthetize the Dynamic Duo. 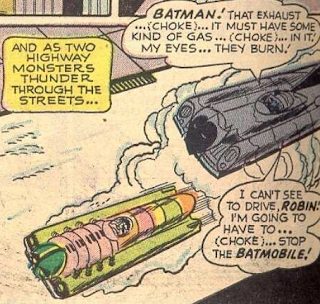 Highway monsters, indeed.  That's not a Batmobile, it's a Bat-mobilehome. 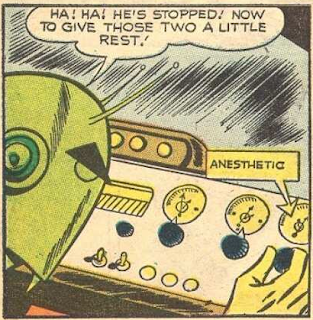 Well, here it comes.  Being a stone cold killer, the Moth just caps Batman and Robin's asses right there and... Oh, wait, that's right; no guns. Hm.  I guess... I guess the only sensible thing to do is to drag them back to the Mothcave.


Oh ho, this is the part where Killer Moth picks up his killer guns and shoots Robin dead with his six assistant bullets, rendering him Batman's most famous enemy for all time!!!!

The best thing about Killer Moth is those eyebrows. On his mask, on his car. Once you notice them you simply can't look away. They stick out so far you could stand under them in a thunderstorm. Of course, moths don't have eyebrows, but then they're not pink and orange, either.

"Ha! Ha!" ? What is he, Nelson Muntz's great-grandfather?

"NOW what do you think of my MOTH CAVE?" Well, geez, give him a chance to share his FIRST impression first, why don't you?

I think I figured it out. Killer Moth is like a one-man Westworld scenario. He's a millionaire who's paying big bucks to live what he THINKS a super-villain's life is like. Seriously, this original version of Killer Moth makes The Joker look like...well, most OTHER versions of Killer Moth.

By All Things Holy, Killer Moth may be the greatest week in Absorbascon history.

Oh, now THERE is any idea.
Imagine Killer Moth renting himself out as a foe.

"Are you a budding costumed vigilante looking to establish street cred? Or just a regular citizen who wants to be 'Batman-for-a day'? Well, you can hire a genuine supervillain, me, Killer Moth, to beat the crap out of!"

My god,he'd make a fortune. It would totally be superhero paintball.

So, Killer Moth looked under Batman's mask, saw it was Bruce Wayne, kicked himself because it's obvious Robin is his ward, and has been pretending since he doesn't know who Batman is?

No, see, the thing is, if you look under the cowl to find out who Batman is, you're implying that you CARE. Whereas, if you refuse the opportunity, you're basically saying, "It doesn't MATTER to me who you are. Masked or unmasked, you mean NOTHING to me. You spend so much time and effort hiding who you are, when the truth is, Nobody Gives a F*ck."