As I've mentioned before I'm a reader of Dick Tracy, particularly since the new creative team has been, well, getting so creative.

Their most recent storyline has guest-starred two private citizens who've taken their cos-play as masked adventurers (the Cinnamon Knight and the Black Piranha) to the streets and become embroiled with Tracy's battle against a returning foe, Broadway Bates. 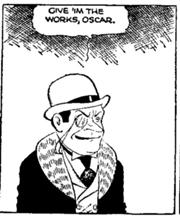 If you're thinking, "oh my god, Dick Tracy totally ripped off the Penguin," you are horribly, painfully wrong (although that certainly has happened on other occasions).  Broadway Bates first appeared in 1932, kids, seven years before Batman himself did.  If anything, the Penguin was clearly, ahem, "inspired" by Broadway Bates, a dapper 'gentlemen criminal' with a monocle, pointy nose, cigarette holder, and walking stick for a weapon. 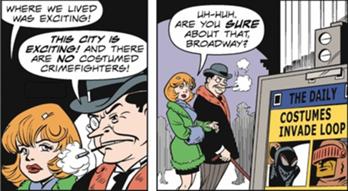 
Despite being the obvious copycat character, the Penguin is about 90,000 times more famous than Broadway Bates ever was (and if you think that's an exaggeration, ask yourself how many people could without the internet tell you who Broadway Bates is, compared to the Penguin). The current creative team, however, holds no grudges for that, and ingeniously turned the entire situation on its head by hilariously lampshading it.  Without ever actually saying the words "Penguin", "Batman", or "Gotham City", they've made it clear that Broadway Bates is, in fact, the Penguin's less successful brother.  Talk about yer Ivory Soap maneuver!

Meanwhile, as the Dick Tracyverse is treating the Penguin with all the reverence due his legendary status, the DCU is possibly kicking him to the curb.  For those not following the current "Death of the Family" storyline in the Batman family of titles, the Joker has extorted the Penguin into attending some big affair at Arkham (ostensibly the Joker's wedding to Batgirl, but that's not important right now).  And they've spent considerable effort in setting up his sidekick, Ignatius Oglivy, to usurp his role as the new "Emperor" Penguin, in the expectation that old Oswald won't be returning from his latest jaunt with the Joker.

I've been complaining for some time that DC's been dissing the Penguin for some decades now, really unsure of what to do with him and unwilling to use him as a "supervillain" per se (which if you ask me is a waste of someone who can fight Firestorm to a standstill armed with nothing but an umbrella).  They've  tried to take advantage of the post-Crisis reboot by making him an untouchable crimelord and arms dealer, who, with his family connections to Gotham's early elite, passes as a legitimate, if not highly respected, businessman.

But really, there's only so many times you can see (1) the Iceberg Lounge destroyed and (2) a member of the Batfamily or (embarrassingly) of the GCPD beat or extort information out of poor Pengy before your respect for him starts to stagger.  Most recently, as the Joker outmaneuvered him and his sidekick was scheming rings around him, the unthinkable happened and I've begun to question my devotion to the character.  Is Oswald Chesterfield Cobblepot, the Penguin, a character whose time has come and gone?

Once upon a time, the ideal of a "gentleman thief" was startling and innovative, a reversal of the expectation that criminals were all low-brow knuckle draggers whose criminal tendencies were easily divinable through the shape of their craniums.  Nowadays, when anything other than white-collar crime seems almost quaintly old-fashioned (do people actually 'rob banks' any more?), the Penguin seems, more than any other member of Batman's rogues gallery, to be an artifact from a different society.

The Joker?  Clowns will always be scary and he's proven himself wildly re-interpretable in various decades and media.  Two-Face?  People will always fear the potential for evil within themselves.  The Riddler?  Well, while "riddles" per se are a bit musty, the concept of an intellectual villain who poses puzzling challenges and plays games with the police is more popular than ever (judging from the plot of about 10,000 films and shows in the last 20 years). As for Catwoman, well, as long as there are still adolescent-hearted straight men interested in costumed cops'n'robbers, there will always be a place for a slinky, self-centered sexpot dressed in a leather catsuit and brandishing a whip.

Has the Penguin outlived his usefulness as a character, while Broadway Bates still trudges slowly along 80 years later...?

Email ThisBlogThis!Share to TwitterShare to FacebookShare to Pinterest
Labels: Penguin

You know who the Penguin reminds me of? Not Wilson Fisk, nor Viktor Bout, but Karl Rove. Maybe Batman Returns expressed the right idea the wrong way. Truly play up the class warfare by making Oswald Cobblepot an entitled, scheming little slug. Borrow from J. Jonah Jameson and turn the Penguin into a firebrand crusading against vigilante justice while touting gold and firearms. Really sell it by not making Cobblepot an actual above board criminal, but rather one of these conscienceless cretinous opportunists who'd sell out his city and consort with crazies based on self-serving, borderline sociopathic philosophies.

I've always thought DC missed out on an opportunity after "No Man's Land" to have the Penguin run a credible and winning campaign to be Gotham's mayor.

I didn't read many Batman: The Animated Series comics past the Puckett & Parobeck issues, but I seem to recall the Penguin being elected mayor in the latter issues.

I think the DCU's movement towards grim & grittiness doesn't leave room for the Penguin. I thought the crime boss/ Iceberg Lounge set-up was okay, but it was an early indicator of a larger trend: super-villains being marginalized unless they are:

The Penguin as a gentleman thief wasn't "hip" enough, so he became a corrupt businessman. If he wasn't such a recognizable pop culture figure, I could see him being used as infrequently as T.O. Morrow or the Queen Bee.

As I recall, you're correct, Mike. Penguin did get elected mayor in the animated comic. Which, frankly, is a great idea, though I might change it slightly to make him a corrupt councilperson or somesuch. Mayor is a bit high-profile, but Councilman Pengy continuously scheming against the other city officials and Batman would work nicely, I think. Heaven knows his criminal record wouldn't stand in his way. Bottom line, though, he's a much better mastermind that he is a supervillain, even with trick umbrellas.

That was a great storyline, particularly when we (and Batman) discovered HOW and WHY the Penguin got elected. It was a true triumph of character-driven Batman storytelling.

Dick Tracy has been quite fabulous now that Joe Staton is drawing it. If only my newspaper carried it!

Frankly, the Riddler and the Penguin are my favorite Bat villains. I'm suffering from Joker overload. And I love spats. And monacles and umbrellas. But you're correct, the Penquin hasn't had a good crime spree in quite a while.

Heavens, yes. I've been suffering from Joker overload for 20 years or more. Pretty much since that whole "Death in the Family" business. And of course that's back now, too.

I do miss the wider variety of villains in DC comics. When every single villain is a monster who would blow up a busload of school children and/or rape your grandmother without blinking an eye, it gets boring, no matter what the villain's name, costume, and supposed theme are. Besides, there's only so many murder sprees you can buy before realizing some non-heroic people should have gotten fed up and killed the villains themselves by now.

(Of course, in Marvel comics, I just miss villains, period. Seems like the heroes mostly fight each other, and the only villains that appear are pretending to be heroes.)

"When every single villain is a monster who would blow up a busload of school children and/or rape your grandmother without blinking an eye, it gets boring"

Absolutely. Nobody just wants to match wits with the heroes any more. Probably because that type of story line requires a certain amount of skill, and I'm not sure that the majority of the comic writers these days have it. And, of course, there's just pandering to the lowest common denominator.

Don't get me started on the Joker. The fact that no one has killed him yet has bothered me for years.

In Marvel, villains have to pretend to be heroes.

It's the only way to get to fight them.

Funny, looking at the art in these examples suddenly made me think of FDR -- somebody I certainly never associated with the Penguin, or any other villian before.

I've read some discussions about how all types of comic strips in the '30s could be very political, (i.e. Annie.)

Maybe somebody was grinding an ax against Roosevelt? (Of course, he wasn't President until 1932, but he was a national figure and NYS Governor before that.)
-----

Nice to have you back, Scipio.