Grant Morrison and I differ on many things.  But we are as one in our admiration of Sholly Fisch, probably the best comic book writer you don't know.

Fisch is the genius behind many of DC's underappreciated all-ages titles, such as "Batman Brave and the Bold", the 'DC Superfriends", "Justice League Unlimited"

To his genius, I dedicate this new feature, "Fisch on Fridays". He's got a whole world of things he's written out there (look him up), but, consistent with the focus of this blog, I'll stick with the stuff he's written for DC. 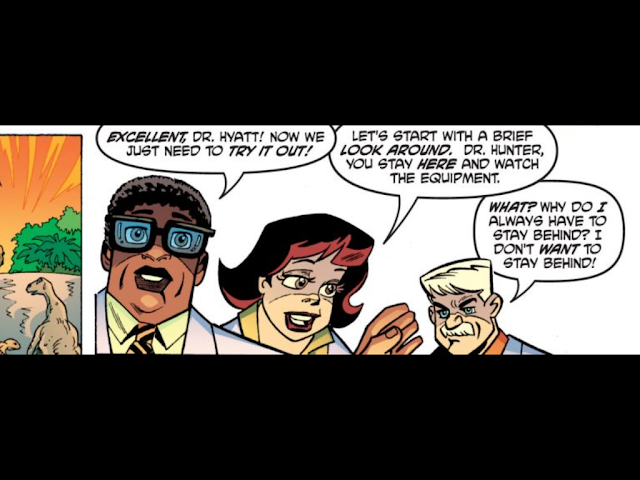 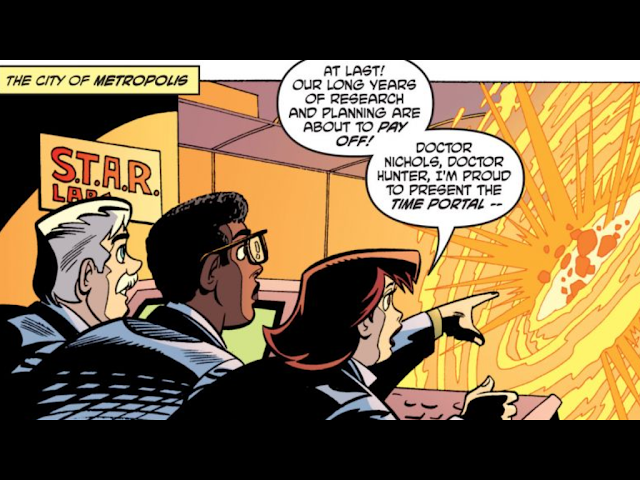 In one DC Superfriends' story dinosaurs suddenly time-travel and roam the earth, thanks to three scientists at STAR Labs.  No surprise there; in the DCU that's pretty much your average Friday. 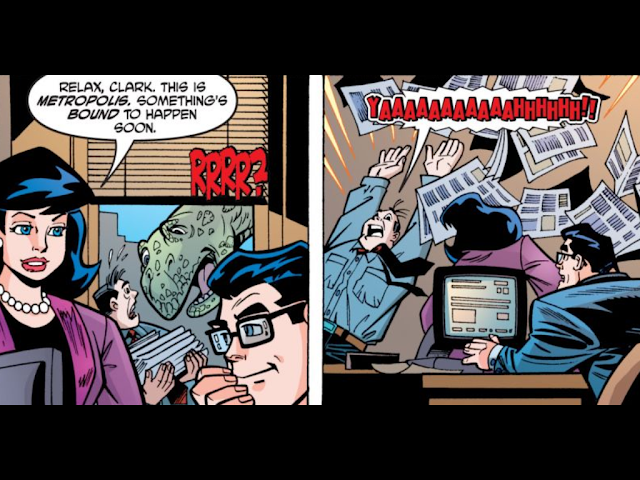 But Sholly Fisch, even though he's ostensibly writing for children, still doesn't pass up the opportunity for homage to DC's past.  The scientists involved are named:

I've been loving his backup stories in "Action Comics". During the period when Clark Kent seemed to be dead, his friends held a memorial for him, and Lois said (I paraphrase), "Did you ever walk down the street with Clark? Not only did he give money to every homeless person, he even knew all their names! Who does that?"

That is one of the most Superman things I've seen in ages, and Clark wasn't even there.

I have said for years (since DC first launched their Batman Animated comic) that DC's all-ages titles are consistently among the finest things they publish, and Fisch is a big part of that. I absolutely adore clearly written, coherent, done-in-one stories with clean, accessible artwork. I think it's far more difficult to write these than the sprawling "epics" that clutter the mainstream titles -- it takes discipline, focus, and SKILL. I experience physical pain when the titles are cancelled.

And, in all fairness, the Marvel all-ages titles are some of their best output. DC consistently has the edge over them (their characters just "fit" this style better), but many of the Marvel Adventures titles are top-notch.

Sholly Fisch is indeed amazing. And I completely missed the names of the scientists.

So there I was, looking online to see what people were saying about my story in last week's Action, when I stumbled across a link to "Fisch on Fridays." Well, that was a surprise.

Never really expected anyone to devote a weekly (or even annual) column to my stuff. Thanks -- it's very flattering. A little baffling, maybe, but flattering nonetheless.

When you picked the title for the column, though, I'm sure you had no idea how appropriate it was. See, many years ago, when I first started traveling with my good buddy/other half of my brain, penciler James Fry, I called to make airline reservations for Fisch and Fry. There was silence on the other end of the phone, and then the ticket agent said, "...Are you serious?" Later, when I first started dating my wife-to-be (whose maiden name was Day), James and I realized that, if things worked out and we all traveled together, we'd be "Fry, Day, and Fisch." See? You're even cleverer than you knew.

Anyway, it's good to see that people still remember and enjoy these stories -- and that at least one person other than me got the in-jokes. Thanks much.

I am very honored to have you comment here; thank you. You're one of my favorite comic book writers of all time.

You rock out loud, Mr. Fisch!

What work are you most proud of, what single thing would you like people to read? Basically, what do feel proudest about having your name attached to? (To put it differently, what is your best trick?)

Well, I suppose that beats rocking quietly to yourself. Thanks!

Sorry it took a while to respond to your question, but I just got around to taking a look and seeing it was there. Hope you're still checking for a reply.

My greatest trick, eh? (And thanks for the Action reference.) Hmm, that's not such an easy question, actually. My gut instinct is to stick with Mxyzptlk's answer of "my family." I'm also proud of an awful lot of the projects I've worked on in my day job, where I help make educational TV and other media to educate kids around the world.

Comics-wise, of course, I have personal favorite stories from every series I've written, be it Action, Batman: Brave & Bold, Super Friends, or even Looney Tunes or Scooby-Doo. Sometimes, it's a particularly powerful story (like Ma and Pa Kent trying to have a baby in Action), and other times, it's something that just makes me grin like an idiot (like the Bizarro or imp issues of Super Friends, or the Batman-Wonder Woman wedding in Brave & Bold). I also have some older faves, like a Spidey-Human Torch Xmas story in the 1995 (I think) Marvel Holiday Special or my story in the first issue of Clive Barker's Hellraiser, as well as stuff you've probably never even heard of, like the "Cosmic Crew" science fiction comic series that James Fry and I created for 3-2-1 Contact Magazine a decade or two ago.

Bottom line: My greatest trick? It's probably conning people into paying me to indulge my hobbies for 25+ years and calling it a career.