So, after Batman & Robin escape Joe Coyne's deathtrap by making a battery out of two pennies in saltwater and tapping out an S.O.S. into the phone wires, they search the joint and find a clue to the Penny Plunderers next target: a yacht party that had rented some of Joe's arcade machines.

Batman flies after their escape boat with the Batplane, towing Robin along on water skis. Which makes perfect sense in a world where people make batteries out of pennies and salt water. In fact, I'm not sure why Batman didn't just putting giant pennies in the water and friggin' electrocute the Penny Plunderers. Must have seemed more fun for the artist to draw Robin landing on the gang's faces with his water skis. Besides, it would be impossible for a flying craft like the Batplane to hang something like a Giant Penny out the window. Or so you'd think; more on that later.

So, since it's pretty easy to escape a man in a plane and a boy on water skis once you're on land, the Penny Plunderers go to ground at the docks. UNTIL Joe has a bright idea, as bright as a copper penny:

"No, let's not try to escape Batman; let's try to capture him. Just like I did two pages ago, when I failed to kill him because I chose to set up a death trap rather than shooting him in the head. Why? Because I'm not just an obsessive gangster; because I'm a VILLAIN, goddammit, and I'm gonna act like one! Furthermore, just to show how unafraid of Batman I am, I'm going to use MYSELF as bait. Then I'm going to assume that you two losers, who just had the snot beat out of you by a teenager on water skis, are going to be able to "bottle Batman and Robin up" by, I don't know, sneaking up behind him or something, rather than just getting your asses kicked again by a boy in swimming trunks. And in the process I'm going to lock myself, unarmed, in a room I can't get out of, and call it 'trapping Batman & Robin'; I AM A GENIUS!!!!" 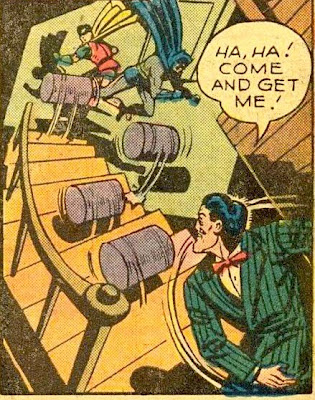 Oh, but the room in which Joe decides to seal himself lies deep with the Warehouse of Irony, for it (highly improbably) has a payphone in it. Which of course Joe can't use, because....

The irony of this is not lost on Joe. 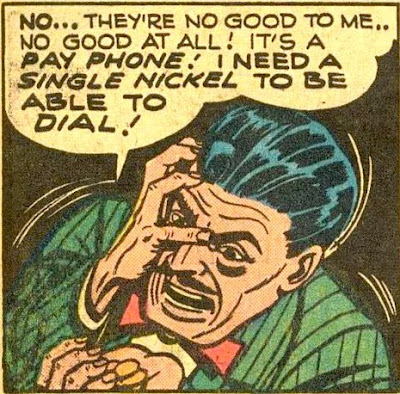 Although the irony not might be lost on Joe, Joe is certainly lost on the irony. 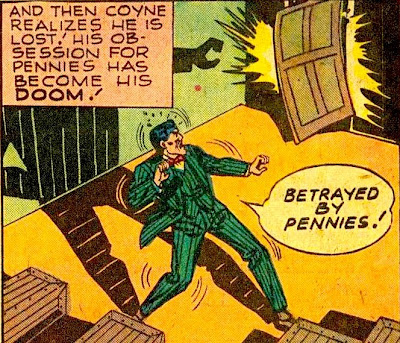 "Betrayed"? MMmm, no, I'd say it's more like you chose something worthless and nearly useless as your "crime symbol", Joe. Appropriately enough. But nothing is ever YOUR fault, is it, Joe?

In case you might have missed it, the caption box underlines the fact that the cause of Joe's death is COMIC BOOK IRONY. 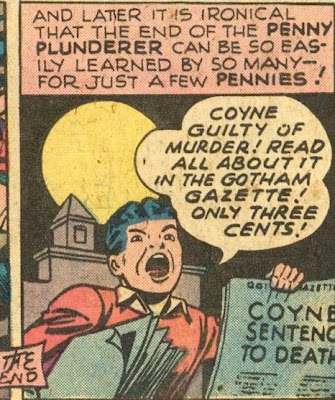 PLEASE tell me this kid grows up to become The Penny Plunderer II.
And Joe Coyne goes to the electric chair, which I really really prefer to imagine being hooked up to two giant pennies immersed in salt water. Joe's story ends here; but the Giant Penny's story goes on!!
Posted by Scipio at 1:58 PM

How does that newsboy survive, hawking papers in the middle of the night like that?

The whole Penny Plunderer II idea you raise reminds me of one of the other all-time great super-hero stories. have you ever read Super Friends 1-2 wherein 5 the arch-foes of Superman, Batman, Robin, Wonder Woman and Aquaman recruit young sidekicks? If not, I'm sure when I tell you that Human Flying Fish was one of them, would vow to befriend jean Loring if that's what it took to get your hands on that classic.

Oh, H, how you sadden me! How QUICKLY they forget:

Worst part of the plan: A guy obsessed with pennies tries to get Batman into "close quarters."

As another level of irony, the only death-penalty crime that Joe seems to have committed is the murder of his own henchman.

Joe's lawyer can't have been very good if he couldn't save Joe with an insanity defense; I mean, just have one of the surviving henchmen describe Joe's activities, it's in the bag. Then again, Gotham juries have surely heard it all...

Clearly, that newsboy is Billy Batson, in a rare Golden Age DC/Fawcett crossover...

"the only death-penalty crime that Joe seems to have committed is the murder of his own henchman."

It's an important point, Ronald! Joe's only been to prison once, and a couple of, frankly, penny-ante heists like the ones in the story would have sent him up for a few years and he'd have been out in no time to wreak his penny-related vengeance. If he'd just said, "Hey, Skinny, I understand why you ratted on us, no prob. We've got time to get out of here before Batman shows up anyway. Just can stay or go with, it's up to you!"

Also... given the competition in Gotham, I'm not sure even Joe could muster an insanity defense. Unless his attorney asked, "So Joe.... tell the court, in your own words, what your 'crime symbol' is and why..."

Okay, I forgot, but does a 6 year gap qualify as "quickly?" I prefer to categorize my forgetfulness as one that occurred after a long passage of time. After all, six years for a reader in the Golden Age is equal to 20 years today.

When I saw this article, I thought to myself "Shades of Joe Coyne!" (Whatever that means.)

Wow. A stunning re-enactment, Scipio. It really makes me to see someone bring back Joe Coyne as a character, a wannabe villain, kind of a schlub. He could be wonderful.

heh, thanks, Tad. I always thought it would be great to use him as a sidekick for Two-Face.

Since H brought up a story to be covered (not realizing that it already had been): You may not have seen my suggestion some time earlier that you cover Showcase #100, the dry-run for Crisis on Infinite Earths. So I'm repeating it. Think of it, Challengers of the Unknown, Metal Men, Inferior Five, Angel and the Ape, Firehair, Binky, and so many more, all in one story. Thanks for your time.