We are familiar with the Giant Penny because of its prominence in the Batcave. For many decades, the Giant Penny has been constantly visible in the main area of the Batcave as one of its essential pieces of recognizable decor (along with the Robot Dinosaur and the Giant Joker Card). Indeed, the Giant Penny and its buddies are the icons by which artists let us know that we are in the Batcave. Rather than, say, the JLA Secret Sanctuary or the *snort* "Arrowcave". One wonders what trophies might be used to easily distinguish the Arrrowcave; probably a giant wooden nickel. But that's a discussion for another time. 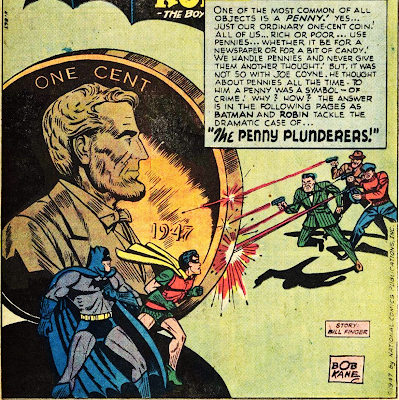 Remember you have Bill Finger to thank for the Giant Penny. Meanwhile, do not look closely at the questionable perspective that is causing the bullets to hit the giant penny instead of Batman and Robin. I blame the artist; some guy named "Bob", apparently.

But do spend time reading that lovely Preface Box. So philosophic, so loaded with .... thoughts. I really miss Preface Boxes; they used to set the tone, they let you settle in as reader to hear the tale. They were like a warm cup of cocoa as you sit down at the fire to hear someone tell a ghost story. Through the Golden, Silver, and Bronze Ages, Preface Boxes were to comic books what the Invocation of the Muses was to ancient epic poetry. Since we've lost them, comics have changed from being a slow descent in a hot tub to a sudden jump into a chilly stream; oh, sure, you warm up once you start swimming your way through it, but it's not the same experience at all.

In the gentleman days of yore, the Preface Box was a warm hug before a long conversation over a candlelit dinner. Nowadays, it's not uncommon to put the title and authorial credits for a comic book story at the END of it, which is the literary equivalent of tossing someone your name and number only after rockin' it in the back of his van in the discotheque parking lot.

And the "Penny Plunderer" Preface Box is lavish enough not only to set up the mystery of why someone would be daft enough to focus their criminal career on pennies (unlike normal people, who never think about pennies at all, let alone think about pennies while shooting at Batman) but to set up its bizarre antagonist with such poetic elan, in a haiku titled "We Handle Pennies All the Time and Never Give Them Another Thought":

But, it was not so
with Joe Coyne. He thought about
pennies all the time.


Wow; Joe Coyne, elegantly wrapped up in 17 syllable, much like... like a roll of pennies. Don't you wish your current comic book writers took that kind of interest in their craft? Before we delve into the story proper, what kind of haiku can you compose to honor antagonist Joe Coyne, writer Bill Finger, the Giant Penny, or the late lamented Preface Box?
Posted by Scipio at 10:28 AM

I'd say not - solicits offer up a tease or idea of the story but due to the nature of the business, how often are they out of date when the actual issue is published? When that happens, the original solicit's worthless.

Oh, Joe, Poor Joe Coyne.
What led to this life of crime?
Penny for your thoughts.

Why do they hide so?
Smack thugs down with batarangs.
Time for comeuppance.

Ah, Haikusday. How I missed thee.

Joe Coyne thought he was
in for the pennies - Batman
gave him the poundings.

He pointed out plots
Like a hangnail - we miss you,
The late Bill Finger.