When last we left the Penny Plunderers, Joe Coyne had re-acquired one of his lost gang members, one who desperately hopes Joe doesn't realize that he ratted him out to Batman. But Joe does know. Penny for your thoughts, Joe!

Extra style points to Joe for taking the time and trouble to set up that damning fortune in the weight machine. Anyone can be evil; being a villain is about style, people!


I bet you probably don't find Joe Coyne very threatening. He has no superpowers or special weapons. He has no disturbing deformity or demented worldview. He's just a creative hood with an obsession for pennies and less fashion sense than Jimmy Olsen. But you know what? He's still a Golden Age villain: 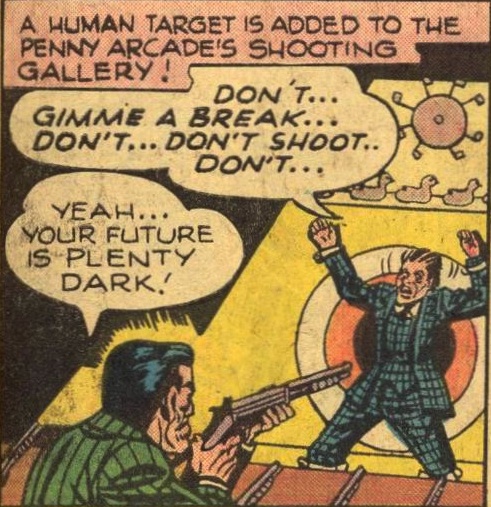 Golden Age gangsters are happy to shoot you dead, in a darkly ironic way. We may laugh at Joe Coyne because he's no Lex Luthor or Joker, but he's a great example of the transition of villainy that occurs across the Golden Age and into the Silver Age.

Old school crime comics had a host of gangsters, who to us would seem mostly interchangeable. Usually they were not distinguished by their appearance or obsessions, but rather by their criminal rackets. They were The Guy Who Fixed Prizefights or The Guy Who Preyed on Trucking Companies; how exciting. But Batman changed all that.

As has been pointed out a zillion times, Batman was, in many ways, not particularly original. His various characteristics (detective, polymath, pugilist, acrobat, wealthy socialist, dark vigilante, etc.) had all been seen in other characters, even in combination. There were other heroes who could do all the things that Batman could do. The difference is that the focus shifted away from what Batman could do-- because, as we know, Batman can do anything you need him to--and toward the way Batman did things. Batman was about STYLE, and that was the key to his popularity.

That, and his bottomless well of human sympathy.


His slate of foes, over time, naturally evolved in that direction as well. The emphasis shifted from scheme to theme. This was very liberating for the writers; once they had villains who were intrinsically engaging due to the style, they could focus on coming up with interesting, even outlandish, schemes for them to perpetrate. The combination was much more potent than the the old "Manny the Mafioso" gangster stories, and, to this day, colorful villains tend to squeeze out other, more mundane criminal threats.

[Oh, and for That Guy who's about to object that Dick Tracy and his villains Did It First: EHHNNKH! Sorry, wrong answer. If you'll check the debut dates of Tracy's villains, you'll notice that prior to Batman's debut in 1939, Tracy's foes are mooks like "the Smuggler", "the Squealer", "the Tramp", "the Stabber", and "Larceny Lou". With the possible exception of "The Blank", it wasn't until the 1940s that Tracy villains really went wacky.]


Any way, Joe's basic tale is a classic gangster story of kid who makes the wrong choices. But his perception of a theme to his failure, his obsession with turning this theme to his advantage, the predictably his mania creates and the fact that his mania proves his ironic undoing: these are style markings of the supervillains to come. As is his use of thematic weapons to capture Batman and Robin when they show up: 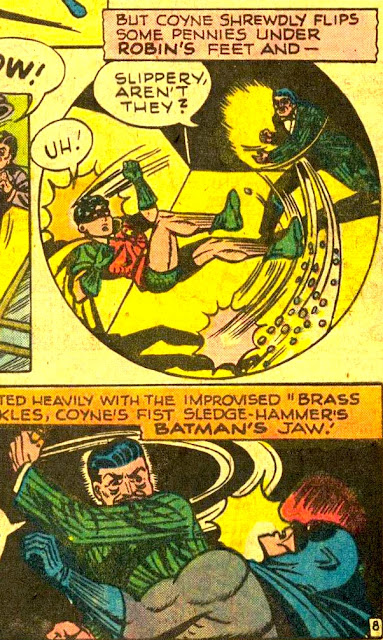 Really. Supervillain or not, you have to respect someone who can beat the crap out of Batman and Robin with nothing but some pennies. In just two panels.


Then, in another moment of budding supervillainy, Joe, having knocked out Batman & Robin with nothing but a bunch of pennies, cobbles together a death trap with ordinarily household items.

One of those pennies should actually be colored GREY not ORANGE. It'll be important in a minute. Oh, and note the spices.


Batman, not to be outdone, spanks MacGyver's mama by getting out of trap using the two cents that Joe couldn't stop himself from tossing them in order to be an ironic asshole, some blotting paper, and salt water. Really, this is either the most awesomely absurd or absurdly awesome death-trap escape from anything, ever (you choose): 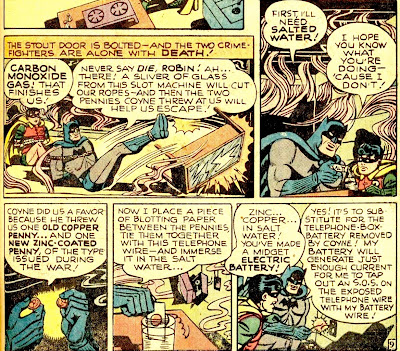 Thank goodness they store their condiments with the unused arcade machines. And that everyone in comic books knows Morse Code!


I tried to come with some reason while Batman would do this rather than just, say, pick the lock on the door. Only possibility: this means of escape was the optimum intersection of "awesome" and "ironic".
Posted by Scipio at 9:37 AM

Tough! But that's always
The risk a fellow takes when
He turns criminal

Batman doesn't even need to land before composing haiku

God, I love Comic Book Irony. It's the BESTEST Irony!

"The stout door is bolted -- and the two crimefighters are alone with DEATH!"

They just don't write captions like that any more. And they really should.

Nowadays Batman would extract the salt from his own sweat and the copper from his own blood and the zinc from, uh, somewhere...

Wait, from which household item did Joe get the carbon monoxide gas?

Of course, the REAL luck -- aside from the fact that Batman knows how to find blotting paper in an arcade -- is that one of Joe's underlings left his half-full drinking glass in the employee lounge or whatever that room is, because you can't have salt water without WATER. Few people realize that this sequence inspired a crucial subtheme in M. Night Shyamalan's "Signs"...

Ronald - zinc is all around you, even in rotary telephones and gun firing pins:

Also, you can get carbon monoxide from water heaters, furnaces, and lots of other things:
http://www.ext.colostate.edu/pubs/consumer/09939.html

Huh. I kind of assumed they were gas-powered arcade machines ;-)