The Case of the Penny Plunderers begins with the origin of our antagonist, Joe Coyne. 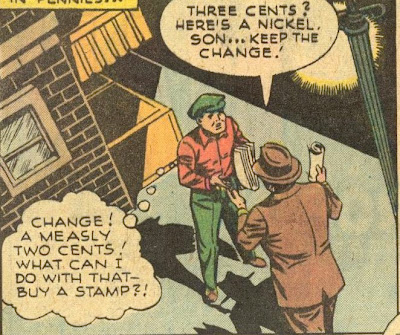 "A measly two cents? What can I buy with that?" In 1947? Probably a new suit. In fact, sell 2.75 more newspapers, Joe, and that'll be enough for you to buy an automatic washing machine, a year's supply of gasoline, carpeting for the living room, a vacuum instead of a plastic broom, not to mention a forty-inch television set.

Actually, according to the on-line inflation calculator, Joe cannot, in fact, buy much with 2 cents, since in 1947 it was only worth the equivalent of 19 cents currently. But Joe could still buy almost ten times as much we could, so no sympathy for him here; heck, we can't even buy a stamp for 19 cents. 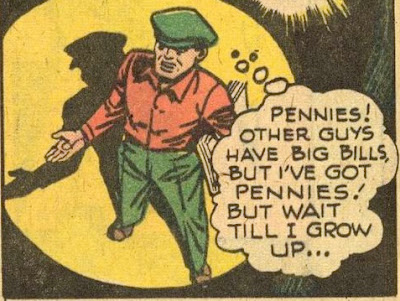 Yes, Joe; other guys have 'big bills' and you have only pennies, as you stand there in the Gotham night under a streetlight. Of course, some other guys with big bills have to stand in the Gotham night under a streetlight and watch their parents lie there dead in pools of their own blood. Beware of envy, Joe. Well, perhaps, as you say, it will be different when you grow up. 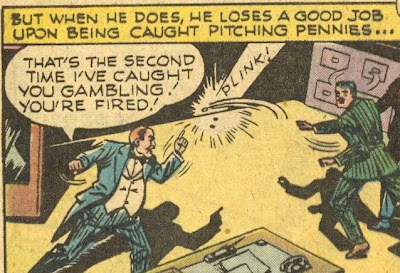 Or maybe not. Writer Bill Finger, with astonishing efficiency, let's us know that Joe got his chance, and he blew it. It's not just that he got a good job and got fired. He wasted it on, well, penny-ante gambling. But the key is: Joe didn't stop when he got caught once. Because Joe is a weak fool. Joe is weak and turns to crime. And he's clearly a fool for not casing the joint better. Joe, you shoulda spent some of those pennies on some crime comics and you'd know that already. Oh, and speaking of weak fools... who's your tailor, Joe?

But the Gotham penitentiary has its usual salutatory effect and Joe sees the error of his ways. 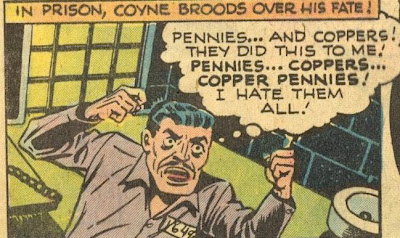 Stop whining, Joe; at least you got a nicer outfit out of the deal.

Um... Joe? Brooding's not healthy. You just said "I hate pennies", which is crazy talk, and you keep shouting "COPPERS!" and "PENNIES!", kind of like Mr Crocker from Fairly Odd Parents. Now you're just making irrational, baseless connections in a paranoid attempt to displace your own failures and follies onto some sort of external conspiracy. Kind of like Umberto Eco. And you're doing that thing with your hands that people do right before they become comic book villains. Turn back, it's not too late, Joe, it's not too late! 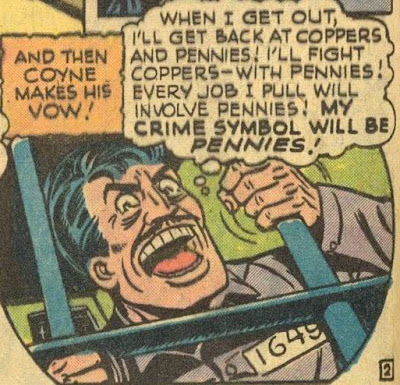 This really needs in some museum somewhere. Or in every museum, everywhere.

Uh-oh; it is too late. You're making absurdist vows, are talking about having a 'crime symbol', and have degenerated to the point where you can only portrayed by John Astin or Raul Julia. And since both of them are dead, that's ... a bad sign.

Yep, Joe's definitely turned what I call "the Mad Hatter's Corner", the point at which, after a series of questionable decisions of increasing dubious morality, a character gets that one final chance to suck it up and be a normal person but instead says, "What the heck, I'm a Gothamite, I'm just gonna choose to round that corner into Crazytown and set up shop there!" Vowing to avenge your parents' death by fighting crime doesn't seem quite so crazy when compared to vowing to base on your crimes on pennies.

So... Joe embarks on a life of crime based on... pennies. Which is sure to turn out so much better than his previous life of crime. You know... the one ruined by pennies.

Let's see: penny arcade machines (heck, ANY pinball machine), bank tellers with no plexiglass barriers, no coin counting machine. It's seeming less and less likely that Joe Coyne will be in the next Batman film trilogy.

But how many opportunities for penny-related crimes can there be? I mean, even in Gotham? 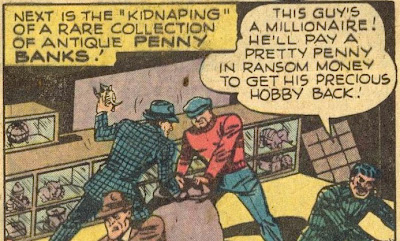 Piggy banks. Of course Gotham has a millionaire with a "priceless collection" of something bizarre that relates to the villain's 'crime symbol' that he's willing to ransom back for a fortune. Because that's the kind of place Gotham is. At least piggy banks are more likely than Estruscan snoods.

Well, Joe should be okay; it's extremely unlikely that he's going to draw Batman and Robin's attention with these kinds of low-rent, low-risk heists. Unless Bruce and Dick are bored (since they have nothing to do other than fight all the crime in an enormous city, maintain the Batcave, and do all their millionaire philanthropist stuff) and are just sitting around trolling the newspaper for weird crap they can stick their noses into. 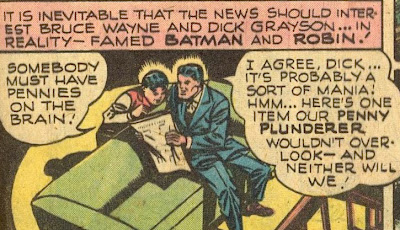 Good news for portraying Joe Coyne in the next Batman movie - John Astin is in fact, ALIVE.

Pennies on the brain ... can't say I'm familiar with that idiom. And a two- cent tip for a three-cent paper? That's 67%! I've never tipped that much.

Other guys have big
bills, but I've got pennies! But
Wait 'till I grow up ...

Wow. That's astonishing, Nathan, I had not noticed that one....

Truly, Joe is a poet.

I have to admit, that a John Astin portrayal of Joe would be...amazing.

Ah...the good old days of being a career criminal. All it took was a simple obsession, a little time in jail, to work out the details, and suddenly you've got henchmen and an abandoned warehouse, and the world at your fingertips.

Perhaps the same guy who provided JSA member Johnny Thunder's suits. Joe didn't go so far as to go plaid, though. Because once you go plaid, you've REALLY gone mad...or something like that.

Speaking of which, I got curious and checked and not long before this story, Batman was active with the JSA in All-Star Comics #36 (August-September 1947), for the case of the Five Drowned Men, another relatively well-remembered, yet much grimmer, story. Interesting (or not) contrast.

I never noticed it before, but Joe Coyne does actually look like John Astin, especially when he was trying to out-ham Frank Gorshin as the Riddler.

"Let them send a regiment of Batmen against me!"

Actually, whenever Joe is ranting about "COPPERS!" and "PENNIES!" I always imagine being said exactly the say way that Astin said, "Flashlight? Flashlight! FLASHLIGHT!!!!!!!!!!"

Oh yeah; that scene was the zenith of his bad Gorshin impression.

"And you're doing that thing with your hands that people do right before they become comic book villains."

So, if I practice that pose in front of the mirror every day. . . .