When last we left "the Case of the Penny Plunderers", Joe Coyne had pretensions of remaking himself as a "villain" rather than a mere crook by hewing to a lunatic "crime symbol". Using the power of free association that allows them to divine the schemes of the madmen they fight, Batman and Robin have not only figured out, just by reading the paper, that there is a "Penny Plunderer", but they've divined his next target. 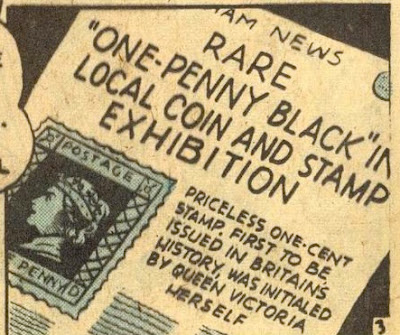 The One-Penny Black, by the way, is a real thing. Golden Age writers like Bill Finger used to hang out in illicit trivia dens in Chinatown, lying on divans, soaking in all sorts of bizarre useless data that they might later incorporate into some plot point. You kids, with your internet, you know nothing of sacrifice. 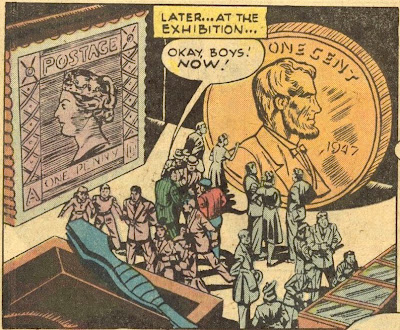 The first appearance of the Giant Penny. And the much less famous Giant Stamp Tongs.

Rather than alert the police (because, you know, where's the fun in that?), they just lurk around in the shadows, until Coyne and his gang show up, whereupon there's lot of Patented Punning & Punching. And Batman showboating by means of functional giant props.

Just once I'd like to see one of those props turn out to be paper mache, so I could see Batman go crashing through it to a faceplant on the hard, cold floor, while the photographers from Picture News go to town. But I'm sure that's against the Gotham City Civil Code on Giant Props.

But sometimes the gods punish hubris immediately and Batman pays for his showboating with...

a roll of pennies to the forehead. 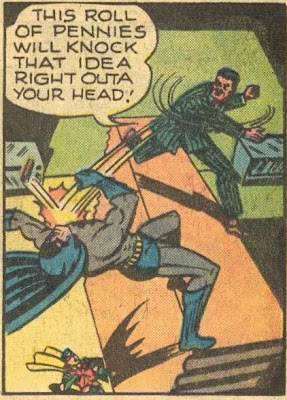 Batman's humiliation is deliciously augmented by the fact that Robin--and a roomful of Gothamites--are watching as Batman gets pwned by a Grade Z hoodlum with some pennies and falls off a giant stamp to the hard, cold floor. Where's Vicki Vale when you need her? 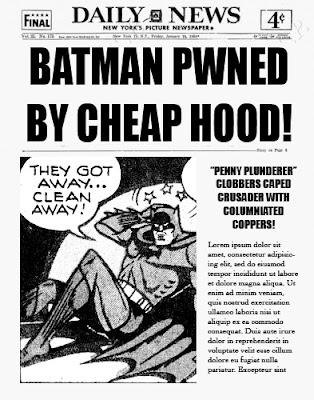 The bad guys do the logical thing, which in Gotham means "escape via the rooftops after climbing up the giant postage stamp and out the skylight." Because, you know, the rooftops are the perfect way to flee from Batman. But one of them doesn't make it, and Batman, tries desperately to salvage his self-image by intimidating a skinny gunsel. Boy, I sure hope a member of Coyne's gang isn't eavesdropping from the skylight and kidnaps the squealer....!

This is what the Giant Penny does: 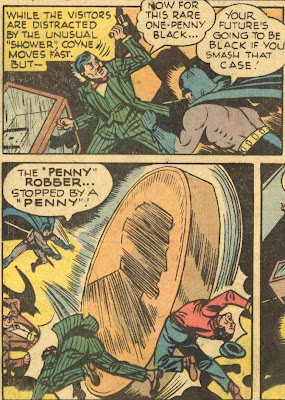 Small wonder that the Giant Penny is the standard by which all other Giant Props are measured. But what's it feel like to get hit by a Giant Penny? Well, we'll be discussing that later.

Batman actually uses the Giant Penny against Coyne's gang, NOT vice versa. Then it's not seen again until it shows up three years later in the original Hall of Trophies story ("The Thousand and One Trophies of Batman", Detective #158, Apr 1950).

How did Batman get his gloves on the Giant Penny? Most readers think grateful citizens just up and give Batman trophies after he saves their asses (or gets them publicity by getting pwned on the front page of Picture News). Or they think that Batman pockets trophies from crime scenes when the police aren't looking. But that's silly. Clearly, Alfred spends most of his day on Ebay on Bruce's behalf, buying up relevant giant props from previous cases. And thanks to the Gotham City Civil Code on Giant Props, the expense is actually tax-deductible.

I absolutely love the 'speed line' Abe Lincoln on that penny as it smashes the gang. Batman is clearly hurling it at them like a giant Frisbee, rather than rolling it into them. 'Cause that's how Batman rolls, gunsels!*

*Why should Robin get all the bad puns?

No American newspaper would use a word like "columniated". Tbey write to a fourth-grade level.

The correct word is "columnated" and I put "columniated" as EXACTLY the kind of error such a paper would make, to see whether anyone would notice.

Notice that in Gotham City, minor criminals sort of naturally gravitate toward any boss who can even remotely be considered a super-villain. It's some sort of skewed survival instinct. Since Batman invariably knocks the underlings out first and then goes after the boss, whom it usually takes longer to catch, they have more time to recover and escape. And everybody else is paying so much attention to the boss that maybe their escape won't even be noticed. Sure, there's the risk that the boss will kill you to make a point, but he who dares wins, right?

>>>Rather than alert the police (because, you know, where's the fun in that?)

The cops handle the muggers, pickpockets, burglars, etc while Batman handles the crimes that have a motif or a theme or a hidden message or whatever. Clearly Joe is a motif man but it wasn't obvious to the cops at first because he didn't go so far as to actually DRESS UP as a coin or Abraham Lincoln or some related concept. It took a while before the, uh, penny dropped on that one.

VERY interesting theory about gangmembers, Ronald; I like it.

As for Joe's motif going unnoticed by the police, you're right; it's not like he designs a penny-themed costume. Awesome though that might be... and a substantial improvement over what he does wear.

Another thing interesting about Joe's M.O.: at no point in the story does Joe actually steal any pennies or anything that even looks like one. His application of his theme is strong and consistent but entirely INdirect.

The scene wherein Batman is clocked by a penny-ante criminal is one of my absolute favorites...mainly because Batman DESERVES to be humiliated once in a while.

I still think an American newspaper would have dumbed it down a lot more. Something like, WORLD'S GREATEST DETECTIVE DEFEATED BY COMMON CENTS.

First, you're both underestimating the Daily News. They use two approaches. They sometimes go utilitarian, with a bloated prose non-headline like, "Batman Defeated in Improbable Manner; Fails to Promote Traffic Safety." Alternatively, they just use an enormous-print, one-word pun, probably something like, "Penny-Pinched!"

The New York Times is fourth-grade reading. The Daily News...not quite.

Second, I always wondered what company churned out those giant props. Are they all custom jobs? Is each one mass produced? Are they created by artists and there's a whole bunch that nobody in Gotham has ever figured out how to orchestrate a gathering that will attract the attention of gunsel-mobs?

Could it just be how Gotham does stuff? For example, maybe the Yam News (that's not the mast?) is actually painted on the highway every morning.

OVERestimating, not under. Duh.

TotalToyz: Some other possible headlines are:

NICKEL AND DIMED? NOT THIS TIME
Lowest Common Denomination vs. Best Detective in Nation

I think Ronald has hit upon the key to what all rational bloggers need to see happen - the return of the Penny Plunderer. Of course that old suit won't cut it today. He needs to do exactly what Ronald suggests - dress as Abraham Lincoln. Imagine how beautiful a cover would look with Batman socking Abraham Lincoln in the jaw or Abe kicking Batman in the jowl.

For good topical measure, the Plunderer can recruit 99 henchmen for his Occupy Gotham crusade, making him the natural enemy of both Batman and that 1%-er, bruce Wayne. These ideas make too much cents not to happen.

Also, the story would need to be stretched out over four issues to accommodate the trade paperback reprint, someone from the Justice League would have to stop by to help Batman out, and we would discover that Joe Coyne had once been molested by a coin collector.

Heh. I wonder, Steve, what would happen if they just retold the story as accurately old-school as possible. Twenty pages should be PLENTY.

Wait, the giant penny existed only as a sub-exhibit of how much the One-Penny Black cost? And Batman, what, later acquired it from the museum because he wanted a REALLY REALLY BIG REMINDER of his less-than-stellar performance on this occasion? Seriously, is there any Batcave trophy that the casual visitor is MORE likely to ask about? ("Okay, I get the card and, hey, we ALL fight robot dinosaurs sooner or later, but what's with the penny?")

Gotham City's museum curators should know to check on what sort of themed crime sprees are in progress BEFORE they put anything (whether as center feature or secondary detail) on display. If they'd just waited a month, World's Finest #31's Man with the X-Ray Eyes wouldn't have paid them any mind at all.

Goto "This next item" (and the image beneath it). Wonder what's the story on THAT giant penny.

H, your comments inspired me to work a little PhotoShop magick!

The Yam News clearly states that it is a 'Stamp and Coin Exhibition' so the giant penny is a perfectly sensible decoration.