As seen at "Comics Make No Sense", there's actual more than one giant penny rolling around Gotham: 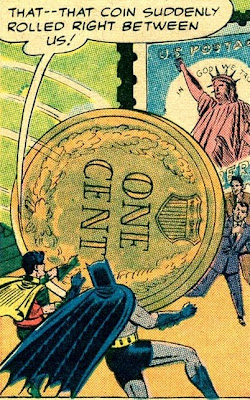 "Gosh, Batman; the nobility of the almost-human giant penny!"
As pointed out yesterday, the Giant Penny weighs in the neighborhood of 49,000 pounds, which should mean that every one of the Penny Plunderers in this panel are DEAD (and that Batman is hella strong): 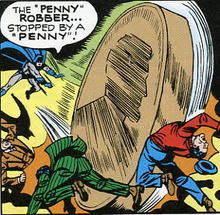 And then there was the time that Bruce and Dick moved the 49,000 lb Giant Penny... BY HAND. 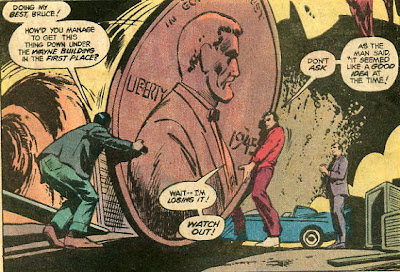 Gene Colan was a great guy; but getting the year on the Giant Penny wrong?
ONLY a Marvel person would make that mistake.
Speaking of the Marvel universe, apparently it's where the Giant Penny vacations: 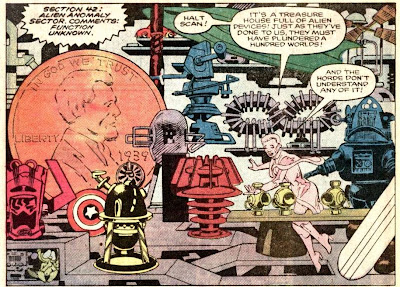 The Giant Penny likes to lord it over pointless Kirbyesque whatnots: "So, what exactly are YOU supposed to be?"
Then (as previously covered the Comic Treadmill's exhaustive examination of ALL giant props) there was the time the Giant Penny decided to go bungee jumping from a helicopter. 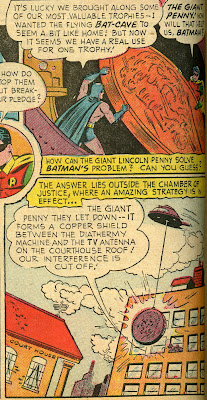 Forty. Nine. THOUSAND. Pounds.
Or, one of my favorites: the time it finally had it out with the Robot Dinosaur. 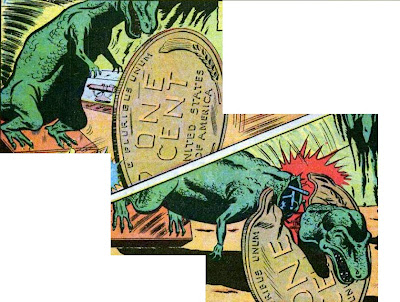 How can the giant
Lincoln penny solve Batman's
problem? Can you guess?

Last line should be "Scipio is right."

I figured out the whole point of Giant Penny Week (not that it needs one) - to make it obvious that the Giant Penny needs its own series. When the Giant Penny gets its long overdue induction into the JLA, fandom will owe Scipio a great big thank you.

"Remember, Robin: it's always wrong to take a human life, unless you roll a giant 49,000-pound penny onto them, not expecting it to crush their spine and burst their internal organs. Oh well."

"Tough! But that's always the risk a fellow takes when he turns criminal!"

Gene Colan did more than get the date wrong on the front of the penny.

In another panel of that story, the back of the penny is shown, and the Lincoln Memorial is depicted. Whether 1945 or 1947, it should have been a wheatback.

"How'd you manage to get this thing down under the Wayne Building in the first place?"

"Don't ask. Because, seriously, I don't remember any of it. Can you imagine how drunk I must have been to have even CONSIDERED it?"

Sorry to be bothersome (on the other hand, why stop now?) but you overlooked a reference to what is apparently an entirely different Giant Penny:

Please goto "This next item" (and the image beneath it). Any idea who the villain who created the 1901 Giant Penny was?

BTW, that's not the Marvel Universe, that's the Strikeforce: Morituri universe, aka Earth-1287 (as noted in the relevant Wikipedia entry). Strikeforce: Morituri was published by Marvel but not set in the Marvel Universe, so Cap's shield, Galactus's helmet, etc. really have no more business being there than do the Giant Penny. I personally find artistic in-jokes sort of tedious, but who am I to tell Brent Anderson of 1987 not to have his fun?

"Any idea who the villain who created the 1901 Giant Penny was?"

No, but I know who could tell us.

The giant penny seems to have a bit of a weight problem -- its thickness varies in each appearance. Sort of like Oprah.