So, have you ever stopped to consider... how much the Giant Penny actually WEIGHS?

Happy to show my work, by the way. The Giant Penny is depicted at various sizes, from between about 12 feet high (about twice as tall as Batman & Robin) or up to, oh, I'd say 16 feet high, tops.

Assuming the Penny is 12 feet high (that's usually how it's drawn) it would be about 9.6 inches thick (since it's proportionate with the dimensions of an actual penny, .75 inches in diameter by .05 inches thick).

Since the volume of a penny (even a giant one) would be (pi * radius * radius * height) that gives a volume of between 90 and 91 cubic feet. It's 90.7 if you assume it's a perfect cylinder; it's not, of course, since the heads and tails have raised and lowered areas to form the design. But it's close enough for comic books.

Assume the penny is made of the same stuff as a regular penny (which you KNOW it is, because Gotham City's Giant Props are NEVER just hollow mock-ups; they are always actual working giant versions of whatever they model). 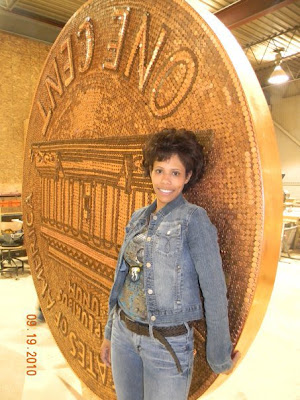 Apparently, I'm not Joe Coyne's biggest fan after all.

the Giant Penny would weigh an estimated 48,769 lbs. A little less if they used zinc instead of tin.

Which makes some of things the Giant Penny does in tomorrow's post even MORE surprising...

And Batman rolled it with a kick? Jeez, when I kick something that weighs more than 24 tons, it just sits there.

I guess you can add the value of the tin, but why bother?

Scipio, you continue to astound me.

LOL! Of course, anything LESS than that goes FLYING.

With the price of copper being what it is, it just goes to show how rich Bruce Wayne really IS! He can afford to have all that cash just sitting in a damp cave!

I do hope he doesn't make poor Alfred polish it. It has to be hard enough just dusting the T-Rex.