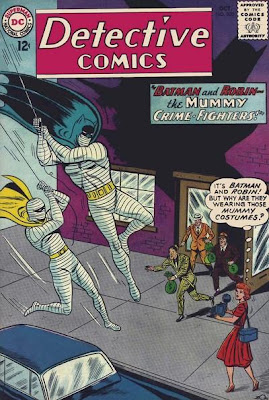 And the best thing about the above list is that it isn't just a fanboy nostalgia-fest. Any kid can understand and enjoy the episode without getting a single 'reference'. Writers of DC comics could take a clue from the writers of the Batman: Brave & the Bold cartoon when it comes to giving us bang for the buck. In an era where DC is trying to squeeze stories into fewer pages, they need every lesson they can get in abandoning decompression and embracing fast-paced, old-school plotting.
Posted by Scipio at 6:07 PM 16 comments:

Over a three-martini lunch, the editors of MLJ Comics must have meet at some point to discuss the ending of their latest Shield story. And how to keep the little buggers reading the Shield's adventures in Pep Comics. Because, lord knows, they didn't want to have to write any more of that Riverdale crap. Jeez, that stuff gives me the creeps.

So, which martini were they on, you think, when they decided to have the Shield not only violate the Fourth Wall and warn kids to read the next issue ... 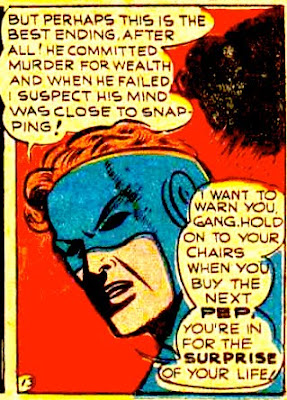 but have him do so over the silhouette of a fresh corpse?

Now that's wholesome Golden Age entertainment. I'll have what they're having!

Email ThisBlogThis!Share to TwitterShare to FacebookShare to Pinterest
Labels: The Shield, transquartomuralism

Here I try to give you some good clean old-fashioned fun, like mad Jean Loring wrecking the planet with earthquakes, tsunamis, and hurricane and the tragic story of unreciprocated love between a pirate and his bosun.

And what I get for this selfless entertainment of the people?

ATTACKED BY THE WIND PIRATE! 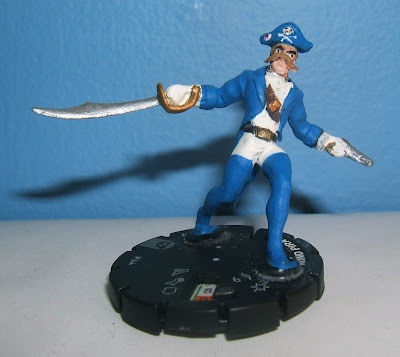 Yes, Totaltoyz secretly set a custom-made Wind Pirate Heroclix figure upon me, in all its absurd glory. Accurate right down to the marzipan magenta skull-flower on his Cap'n Crunch hat.

In case you wondering what the Wind Pirate can do, he sits appropriately enough on a Major Disaster dial; here is his card... 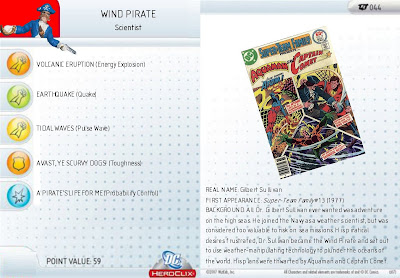 Although the Wind Pirate was not given a name in his one and only story, his backstory on this card lists him as Navy weather scientist Gilbert Sullivan. I assume his middle initial is "N". Probably for "Nancy" (family name, I'm sure).

I'll have to team him up with one of my Jean Loring customs. Or have a new one made, with her in a torn magenta dress and special powers that let her destroy entire portions of the map. Then once she's kayoed she becomes a special object that gives those same powers to adjacent colleagues.

But now I'm also going to need a Bosun figure with some sort of minion power ("Bitchslap: Wind Pirate may Mastermind attack damage or pushing damage to Bosun, making Bosun really hot") and a Piratical Parakeet pog with the power to Perplex ornithologists and Hal Jordan. 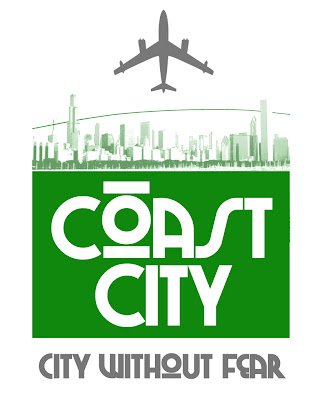 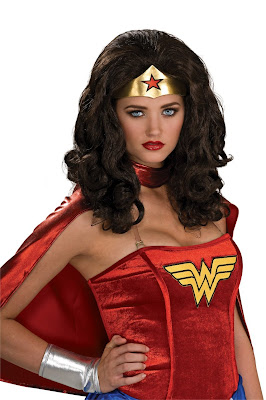