There's no bigger fan of the fictionpolises of the DCU than the Absorbascon. They are such a unique part of DC's world, I've always wondered why DC didn't put out more memorabilia and "souvenirs" from the cities their heroes call home. I used to wear my "Central City Track" shirt running for years, but no one ever caught on... Postercards, posters, mugs, maps-- heck, I'd rather have those around my house the some crap from, say, Jacksonville.
For example, remember those delightfully streamlined and powerful travel posters of the past? Artist Justin Van Genderen has done some amazing posters in that style for Gotham City and Metropolis. You deserve to buy them today.
I only wish I could convince Justin to do the same with my other favorite DC cities, like:
Coast City, the City Without Fear
Apex City, America's Madhouse
Fawcett, the City That Time Forgot
Star City, the City So Screwed Up that Green Arrow is the Best They Can Do
Opal City, the Gem of the Bay
and of course
Central City, Largest City in the Universe and Home of the Flash.
Foreign travel posters would be great, too! Think of all the special locales that could be posterized, such as Bialya, Qurac, Kandahq, Oolong Island, Themyscira, Santa Prisca, Markovia, Parador, and--- okay, maybe most of those places aren't really vacation spots. But it would still be great to have some city posters!
Maybe your purchases and letters can convince Mr Van Genderen to make us some more DCU travel posters. Meanwhile, while I'm no artist, here's what I hacked together today on Photoshop: 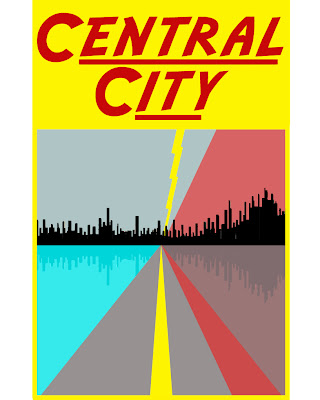 Why, that would make me want to dash out of Keystone across the river for a long and fast-paced weekend!
Oh, and before anyone criticizes me for exaggerating the skyline of Central City...
that's actually TRACED from a Flash story.
Posted by Scipio at 1:20 PM

These are fabulous! And yours is right up there with them. I liked the reflection of the skyline...a very nice touch.

But yes, more goodies with the names of DC cities would be a lot of fun. Who wouldn't want their own piece of meteor rock from Apex City?

I bought my son a T-shirt that has Ferris Air on it, and Test Pilot on the back, and sadly, no one has figure out that one either.

Here's an idea for a DC fictionopolis T-shirt.

I'm setting my DC Adventures game in Gateway City -- a.k.a. San Francisco -- and I'm having great fun "fictionopolizing" the whole of the Bay Area.

Particularly since I commute with one of the people in my gaming group.

"Yeah, Salvo's definitely gotta be based out of Oakland rather than Gateway City proper. Oakland is like Gotham to San Fran's Metropolis."

In Central City
You can see the Flash run past
And lots of chimneys!

Or Apex City
Where fires start every day
for the green hero.

"Star City, the City So Screwed Up that Green Arrow is the Best They Can Do"

You've inspired me; I've done some mock-ups of souvenir T-shirts from a few of DC's fictionopoli!