Well, well, well.
Aquaman is getting his own title again. Kudos, Anax Orin!
I'll be talking more about Geoff Johns taking the seahorse reins of this new title later. For now just celebrate with this Atlantean travel poster: 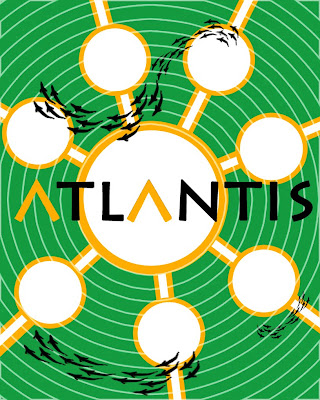 Unlike in the previous poster designs, in this one I have depicted the city (kingdom?) from above. After all, that would be how you would approach it. Besides, Atlantis's traditional domes make a great abstract design. Aquaman is symbolized with the "Aquasymbol" in place of the 'A's in Atlantis and the overall color scheme. His silent invisible power is represented in the concentric circles that are the visual shorthand for his aquatelepathy, causing schools of fish to fall in line with his commands.
Posted by Scipio at 8:07 PM

I know I'm picking at nits and it wouldn't have the chevron "A"s, but I wish it was for Poseidonis instead. I always preferred that name for the city. It's the only thing that bothers me in the excellent design. Love the schools of fish.

The series of travel posters have been all excellent.

I like your Atlantis poster and I look forward to your thoughts about Johns' new Aquaman book. ('Bout damn time.)

I wrote an article about the "Aquasymbol" for a fanzine recently. (Basically, I consider it to be a chemical representation of a water molecule.)

If you haven't read the article I would be glad to email it to you.

And yes, "'bout damn time" pretty much sums up my feelings about it, too!

I wish Delaware had hired you to design travel posters and suchlike. We spent a buttload of tax money on a marketing firm to come up with a state slogan designed to attract tourists. What did they come up with? "It's Good To Be First", a reference to Delaware being the "First State" (first to ratify the Constitution). What the frick does that have to do with tourism? The state of Hawaii is almost synonymous with tourism, and they're last. Of course, there are things to see and do there.

Nice. In fact, the more that I look at it, the better I like it.

Seems appropriate to point this out:
http://www.sabotagetimes.com/life/the-rooms-under-the-lake/

Well, that's odd. Cool, though. Hard to clean the windows, I guess.