The Justice Pack of America

There are some ideas you just can’t get out of your head.

This is mine:
The Justice Pack of America.
I mean, after all, if the original Robotman could have a robot dog, then the JLAers certainly deserve them, too
Krypto the Superdog 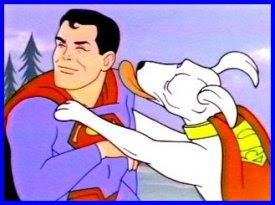 For all his other super-ness, Krypto can’t talk. He apparently doesn't even bark. He just makes that ‘yip’ sound that only other dogs understand.
Krypto is that rock-dumb but pleasant dog that never gets tired of playing fetch. Particularly with Kenny Braverman's femur.
Ace, the Bat-Hound 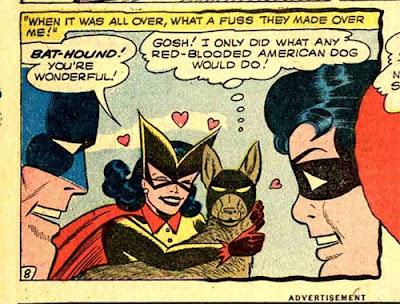 It’s really important to me that you realize that Ace – in any appearance, in any media – is not actually a hound. You can tell by the ears. But we are kind of stuck with the name now.
He was very well characterized on the "Superdog" cartoon show. Personally, I like to picture him doing a constant inner monologue of his own adventures, like in a Frank Miller book. Because some dogs are very serious people.
Ace is that dog who you can tell from the first moment he looks at you has already sized up the softest parts of your body and how long it would take him to crush your trachea and eat your liver. Just in case.
Salty the Sea Dog 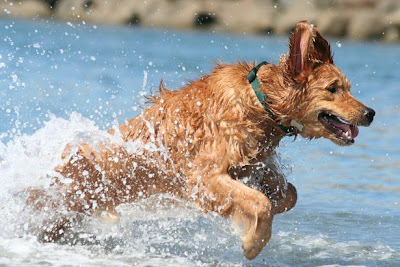 Aquaman's never had a dog, but, it's a very son-of-a-lighthouse-keeper kind of thing to have some stoic, faithful canine by your side as you walk along the beach. Remember all the dogs that had to be thrown back in the sea to keep them alive in Sub Diego? There are water-breathing dogs in the DCU. Aquaman needs one that can communicate telepathically. He would be the quiet leader of the group, helping them to communicate with one another and with humans. And aliens. And other things, like Egg Fu and Geo-Force.
Salty's the kind of quiet, faithful dog that sits by your grave when you die. Until you rise from the dead to command an army of dead fish. 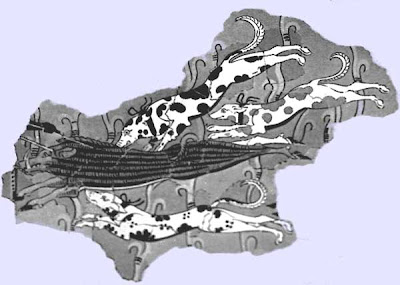 If the idea of Wonder Woman's having dogs (instead of, say, gorillas) seems strange to you, then you're not thinking about Artemis, Greek goddess of the hunt, whose Roman version was named... Diana. She was always traipsing around with a pack of hunting dogs--just ask Actaeon. It's not unreasonable that Artemis would gift a couple to WW. With Amazonian prey-hunting skills. And super-toughness. And Collars of Truth.
Oistos and Toxeuma are those hyper-alert dogs who you only see as a pair and are never more than five feet from each other.
Rex the Wonder Dog
The original Green Lantern, Alan Scott, had a dog named Streak the Wonder Dog who, quite famously, wound up supplanting Alan as the star of his own book. But the DCU still has another "wonder dog": Rex. Rex has mystically imbued powers like immortality, telepathic communication, and human intelligence. This would make him a perfect companion for Hal Jordan, who, despite his ring, has none of those powers. 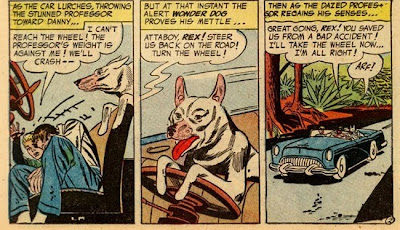 Hal could really use a dog like Rex. It would be kind of like Inspector Gadget and Brain the Dog.
Rex is that kind of dog that really loves to be useful and needs to look after its master 24/7. Lucky for Hal.
Bolt, the Hypersonic Hound

The Flash needs a dog. A super-fast dog that’s still super-lazy and moves as little as possible. 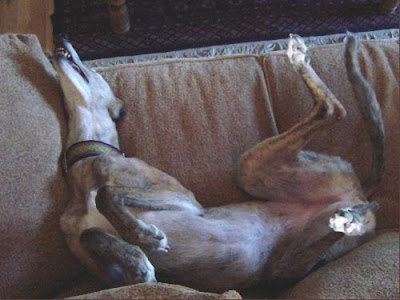 That would, of course, have to be a Greyhound.
Can't you see Barry being late for some world-shaking emergency because he's gotta walk the dog and wait until it deigns to go Number 2? As for why the dog would have superspeed, well, just chalk it up to "The Speed Force". Works for everything else, it seems. Geoff Johns would make it all feel so inevitable... Barry would rescue some dog from a racing track ("I know how you feel, my friend, always having to run ..."), and then the dog would wander into Barry's enormous apartment lab poking around because Barry was wrapped up in some experiment and was late feeding him, and go poking around some funny smelling cabinet of chemicals just as a lightning storm was hitting its peak... .
Bolt's that creepy kind of dog that never makes a peep and is either moving REALLY fast or pretty much not all. In other words, a Greyhound.
Jupiter II, the Dog Not From Mars
Jupiter II wouldn't be a real dog; but he would look like one and think he was one.
The Martian Manhunter’s first dog was a dachshund named Jupiter. Yes, really. But his more famous pet was Zook, the hideous pidgeon-talking space-monkey thing. I’ve always imagined that, at some point, Zook might start to go crazy and became a public danger, so J’onn would have given him a little psychic whammy to convince him he was just a dog, so that he wouldn't have to put Zook down. And so people wouldn't hate him so much for being a space-monkey. 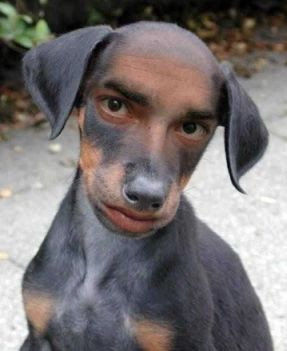 Zook would still have his odd abilities (specifically, to change temperature and stretch his shape). He'd still be able to talk, but only in odd two-word non sequiturs and outbursts, kind of like Invader Zim's "dog". But Zook would have no idea that any of this meant he's obviously not really a dog.
Zook is the kind of dog that... No, scratch that.
Oh, and, occasionally, when the mood struck him or the situation warranted.... 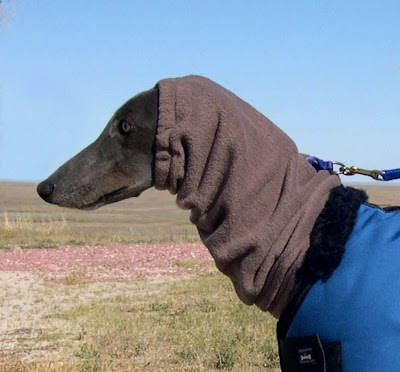 There is some powerful awesomeness here - I know I'd be interested in a TPB of some JPA adventures...

I love this idea! And regarding Wonder Woman, don't forget that one of her frequently forgotten but really cool powers is animal empathy. She'd understand the JPA better than anyone else in the League.

Hal and Rex have already worked together:

And I'd be interesting in writing it, Iam!

I actually do remember Rex leading an animal army against Grodd. I don't remember him directly interacting with Hal, though...

Don't forget Quiver, the Arrowhound (likely a pit bull); Zwitterion the Micro-Mutt (one of those "purse dogs" popularized by Clueless); Stretch the Elongated Dog (a weiner dog, obviously); and I'm sure Robotman's Robotdog could be rebuilt into the Red Tornadog.

Should Aquaman be able to communicate telepathically with Salty? I think Aquaman's ability to communicate with the dog should be limited in the same way any person can communicate to dogs. The real treat is how well dog and person UNDERSTAND each other despite not sharing a language.

Aquaman can't control or order Salty, which means that Salty will always WILLINGLY do what Aquaman wants. Now that's a best friend!

I imagine Salty as being able to telepathy in "words", but not doing so much just because he's not very chatty.

And, yes, Aquaman would never even try to "aqua-command" Salty because he would never need to.

But wouldn't Salty and Topo compete for Aquaman's affections? If so, it'd be great to see a dog and an octopus in a battle of wits.

Also, true about greyhounds. They're basically couch potatoes until they get the room to run. They're also awful fighters - I saw one almost get beat up by a dachshund before a chihuahua came to the rescue - which makes it perfect for the Flash.

And on that note, maybe the Atom should get a fightin' chihuahua.

Maybe he should be named "Saline", instead.

There...there is nothing about this that isn't quite quite fabulous. And while I agree that teaming up Rex the Wonder Dog with Hal Jordan would be an excellent idea, it wouldn't be too good for Rex...unless he can open up a can of Alpo. Because quite frankly, I would't trust Hal to remember to feed him, much less walk him. Of course I feel the same way about Kyle.

Didn't Rex join the Justice League back in issue 146? (before Hal!)

Shoot - looks like someone did this in the modern dark age style:
http://scans-daily.dreamwidth.org/2849860.html?#cutid1

Instead of hunting hounds from Artemis, Wonder Woman should have Cerberus, the hound of Hades. Now there's a dog you don't want to mess with!