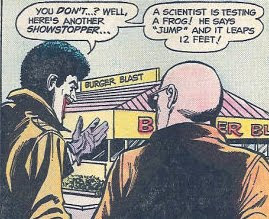 A scientist is
testing a frog; he says 'Jump'
and it leaps 12 feet.
We need a lot more of that in comics, I say.
What haiku can you compose in honor of this truly unusual panel?
Posted by Scipio at 12:50 AM

Joker to Luthor
Existential Villainy
Lost in the retcons


Shatner weave Joker
Has Morrison seen this yet?
Tropes are colliding

Hold the pickle, hold
The lettuce, or I will kill
With Joker venom.

Scientist notes the results:
"Frog lost its legs - and hearing"

(I know, this is a tanka, not a haiku, but I couldn't fit in the punchline otherwise)

the Joker needs hair.
He steals it from Dolemite.
Looking good, Joker.