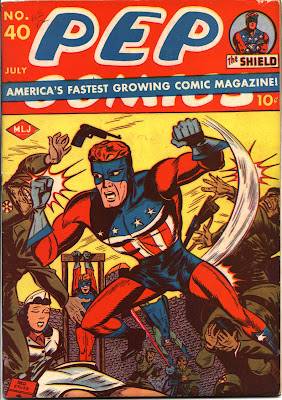 On the surface, this is a perfectly ordinary Pep Comics cover. The symbolic yellow skies. The 3D effect of The Shield jumping outward toward the reader while pummeling a host of Japanazis. The Damsel in Distress. The Hangman leaping in un-helpfully in the wee background. Dusty practicing his pull-ups for the President's Physical Fitness test at school.
But this cover is a masterpiece of deceit that has turned my computer into a house of lies. Why? Because...
THIS SCENE DOES NOT APPEAR IN THIS COMIC!
The contents of this comics are:
The Shield molests an innocent Martian tourist (as seen earlier on this blog).
A two-page Shield prose story (to keep mailing costs down)
Captain Commando and the Boy Commandos doing a conga line to defeat Nazis. Don't ask. 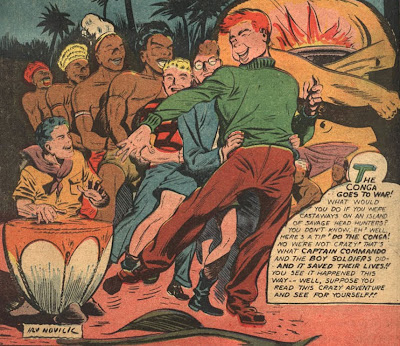 Whoa. Because that's not gay at all.
A story about some seriously hot hillbilly named "Catfish Joe". 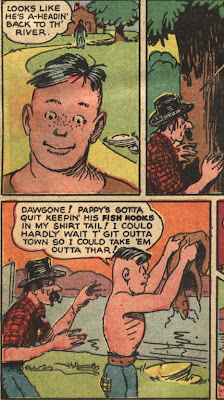 Whoa. Because that's not gay at all.
This guy: 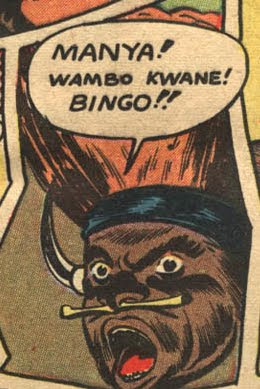 Translation: "B5! Over here! BINGO!!!"
The story of Androcles and the Lion as reenacted by one of comics' greatest thespians, Li'l Chief Bugaboo: 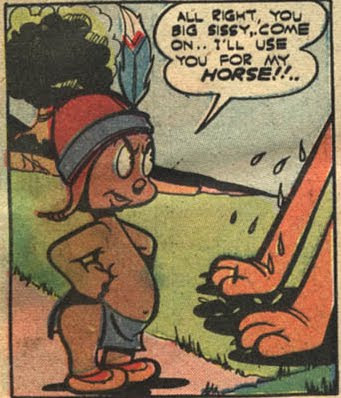 Whoa. Because... well, you know.
The Hangman getting hit by a car. God, I love that every time I look at it.
Bentley of Scotland Yard discovers a mummy that vomits chocolate pudding. 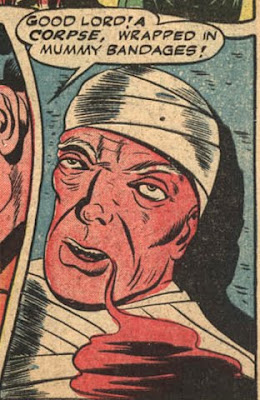 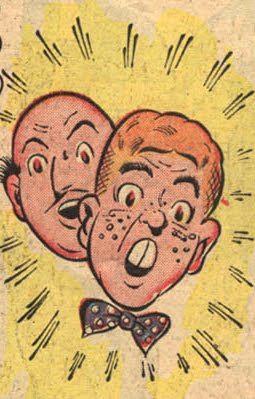 Email ThisBlogThis!Share to TwitterShare to FacebookShare to Pinterest
Labels: archie, The Shield

Um.... What else would be wrapped up in mummy bandages...?

But I HAVE to ask about the conga line! How did it stop the Nazis? Did they double over laughing? Did it bring rain? How? How?

And judging from those pupils, Archie's been indulging in something a little bit stronger than soda pop.

Why, the Nazis put down their guns and joined the dance, of course! Didn't you ever see Cabaret?

I'd demand the full ten-cent cover price as a refund! And don't take no wooden nickels!

Well, Bryan, after the Commandos ships was sunk after sinking a Japanese U-boat (yep), the rescued the U-boat captain by bringing him aboard the lifeboat. He as any sensible villain would do, forced them to row to a south sea isle at gunpoint, where he was killed by the native cannibals, whom the Commandos were able to distract from eating by teaching them to conga, until Allied rescue planes could arrive and gun down the cannibals.

It's just a little bit creepy when the real story is weirder than my joke.