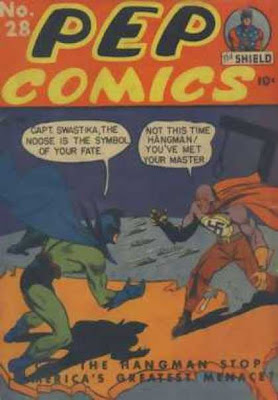 Revolution is not a pretty thing and the cover of Pep 28 is no exception to the rule.

We've already seen hints of what Pep scholars call the 'Quiet Revolution', that is, the Shield's slow loss of dominance over the comic book he made famous. But issue 28 is a watershed... .

It is the first time the Shield does not appear on the cover of Pep. At least, not in the main illustration. The Shield is relegated to the circular ghetto of a character imprimatur in upper right hand corner, displacing the usual promise of Pep's unique brand of Action Detective Adventure.

Responsible is none other than that odious poseur, Hangman, and *snicker* 'Captain Swastika', a villain so lame he wears chinos, sketchers, and a timex into battle.

Well, not battle, really. More like two dogs barking at each other through a fence. Two snitty, horribly dressed partisans, squatting like bears in the woods, hurling weak invectives in the form of failed haiku that appear to have been translated from Japanese, vying for position on a novelty sumo mat shaped like the contiguous U.S. Less focused on Action Detective Adventure than on his own appearance, Hangman made sure to bribe the lighting crew to get his signature silhouette on the backdrop of, um, well, space, or whatever that would be.

Oh, and for those who are wondering whether "Hangman can stop America's greatest menace?", the answer is clearly "NO"....

because Archie is still being published today.
Posted by Scipio at 8:33 AM

Hey! I were chinos, sketchers, and a timex! What are you implying?

Is Hangman's sidekick an animated gallows? Because that is a gallows advancing in the same manner you prescribed to Dusty's cover placement.

Ah... but you don't wear them to battle as a supervillain.

What, no lissome maiden being menaced? No villains hurtling to their fiery doom? No Dusty and his amazingly starched cape?

Most of the "Pep" villains have been at least slightly better color coordinated than this fool.

Tell me how that's any sillier a nom de guerre than all the patriotically-themed American heroes of the era, including but not limited to Miss America, Captain Flag, and the Star-Spangled Kid.