Part Two of Black Hand Week, where I show that the creepiest villain around today was originally the biggest goober in comics.

"I hear Death calling my name. I have for as long as I can remember."

Really? Well, Black Hand, then your memory is not as long or as good as mine...! Because I remember that your original obsession wasn't death but...

Oh, you younguns probably don't believe me, eh? Well, you know what they say, seeing is believing. 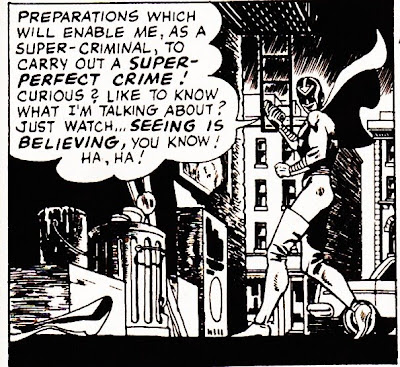 See? I told you.
You may believe in seeing; but Black Hand believes in the wisdom of cliches. 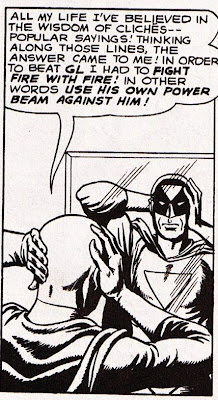 So, basically, if your grandmother were a supervillain, she'd be Black Hand.
Making a costume out of a body bag is odd. Making a supervillain costume of whatever you have lying around from representing the Mid-Atlantic Leather Convention at the last Gay Pride Parade is even odder. Oh, wait; darn those black and white Showcase Volumes; let me fix that for you: 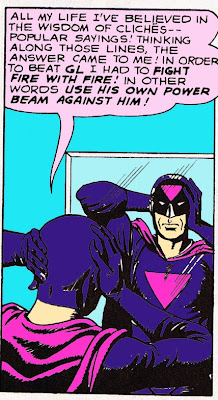 Anyway, before being revamped by Johns, Black Hand didn't get his "power absorber" from an alien; he invented himself. That's what villain used to do. They used to invent inventions that would have made them millionaires if they had patented them. But villains have no patience for the plodding patent process, so they use these inventions to rob jewelry stores.

So, while the original Black Hand was a goober, he was a brilliantly inventive goober, one who was both forewarned and forearmed. 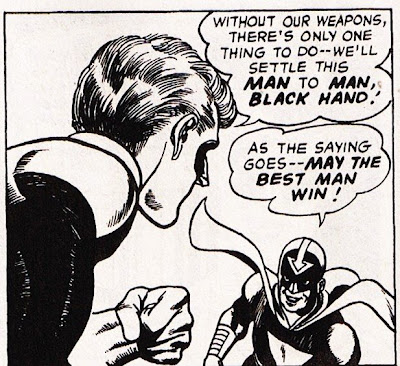 Uh... what? Did Black Hand just talk to ... me? What the==?! More on that little eccentricity in the next segment of Black Hand Week.
Posted by Scipio at 11:25 AM

Incidentally, any discepancy between the Silver Age Black Hand's personality and operating methodologies and those of the current Black Hand can easily be explained by a hand-wave and a hearty cry of "Superboy-Prime time punches."

I've even used this to explain away Marvel continuity problems!

My God, he just doesn't ever shut up, does he? Blah, blah blah, I'm so smart, I'm so clever, I can beat Green Lantern, blah blah, but he has sexier hair than I do, blah.

Wouldn't it be hysterical if it was Neil Gaiman's version of Death who is behind everything in Blackest Night?

Hmph. Very few people can wear purple well. Black Hand is not one of those people.

Scipio, have you used Google today? They have a cool Batman/Robin/GL/WW/Plastic Man logo by Jim Lee, I assume in honor of the San Diego Con.

Did he say 'super-perfect crime'? Call me a stickler, but isn't perfection kind of an absolute condition? Can something go from 'perfect' to 'super-perfect'? I mean, I know there's the whole 'more perfect union' thing we have here in America... but assuming we had a perfect union, would we amend our constitution to codify the pursuit of a super-perfect union?

Is it possible I need to get a life?

Although personally, I would have said the "perfect supercrime".

As the saying goes, there's only two sure things in life -- and only one of them goes well with a super-villain suit!

"As the saying goes, there's only two sure things in life -- and only one of them goes well with a super-villain suit!"

Clearly you've never been at the mercy of the classic Bat-villain "The Tax-Man."

Clearly you've never been at the mercy of the classic Bat-villain "The Tax-Man."

But doesn't that villain only attack Bruce Wayne?

That purple and pink costume is scarier than his current one.

Black hand was constantly breakin the 4th wall in that comic (the only GL comic I owned for DECADES!!!) and it always wanted me to see Black Hand take on Ambush Bug. Two characters who KNEW they were in a comic in a fight to the death...or at least until cancelation!!!

Big Mike, "perfect" is an absolute condition. And our Constitution speaks of a "more perfect union", which is a fallacy. Nothing can be "more perfect"; it either is perfect or it isn't. Forget allowing slavery, and denying voting rights to anyone who didn't own property; that is my big beef with the original draft of the Constitution. Grammar.

I remember BH from a Flash comic where he stole Barry's friction aura, and to save himself from burning, he jammed his whole body inside his costume ring.

If only comics could be that goofy-yet-earnest again.