Well, this is where we left Black Hand last time, looking straight out from the page and talking to someone named "Reader". What is that all about?

In addition to his awesome power of cliches, Olympic-level note-taking skills, and an 89-cent pen flashlight ("Flashlight? Flashlight! FLASHLIGHT!!!" see at 4:18) with which he sucked up morsels of Green Lantern energy like a leather-tanned old man searching for nickels with a metal detector on the beach, he had one other power. An amazing power. The most rare and unusual in all comics. The power of...

Yes, Black Hand was not only aware of his status as a literary character, he perceived the Fourth Wall and YOU ... AND he read your mind through it. Eat your heart out, Grant Morrison. 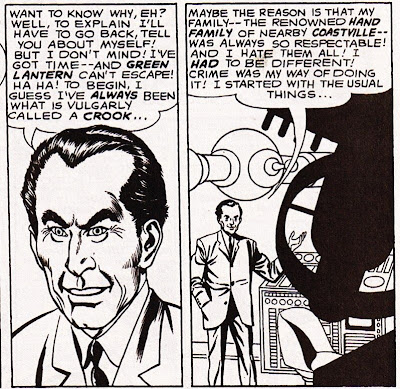 "The usual things. You know. Like villainizing in a business suit, in my personal LEGO shop."

Creepier than Alan Moore, weirder than Grant Morrison, able to violate the fourth wall in a single balloon... it's Black Hand. 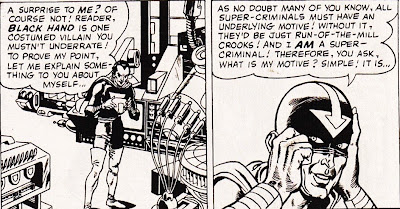 Mothers of Coast City: heed the warning signs of corruption. If your child hangs its clothes with the hangers facing the wrong way, kill it immediately. Society will thank you.

Even in defeat, he still had the power to violate the Fourth Wall, and what's even creepier... 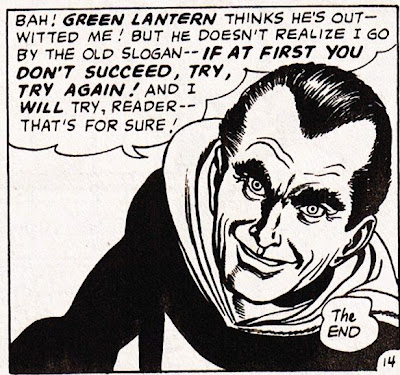 In the pre-closet panel, I just want to know if he picked up that credenza at some kind of Fourth World garage sale. That's not the kind of stuff you usually see sitting around a Green Lantern book.

Man, what is that where one can be intelligent, speak clearly, but have no social skills whatsoever? Asperger's?

But... I always hang my clothes like that! Do I need to be killed now?

It's true that poor old William does seem to be suffering from delusions of grandeur...and yet, look at him now!

"Creepier than Alan Moore, weirder than Grant Morrison, able to violate the fourth wall in a single balloon... it's Black Hand."

I nearly peed my pants when I read that.

I believe I read somewhere that Morrison was going to include Black Hand in Seven Soldiers back in 2005, but Johns asked him not to because he had plans for him.