"Are you planning on bringing back some of the '40s heroes who have died, like Sandman or Starman?" Johns: "Yes."
EVEN VIBE IS GOING TO COME BACK. 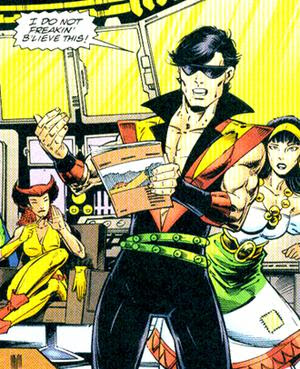 I live to serve.

And just how giddy ARE you, Scipio?

Vibe's costume is going to be amazing. I'm envisioning the V emblem as the fingers of the Black Hand symbol.

And since everybody so far seems to be a twisted version of who they were in life, is Black Lantern Vibe going to be more interested break dancing than anything else?

Well, there goes my theory of Vibe still being alive in suspended animation in the Secret Sanctuary.

Still, this development greatly pleases me. As do a great many of the other twisted resurrections we can look forward to.

I'm curious to discover how much of a "monkey's paw" wish-fullfilment this is going to wind up as in the end.

I can't help but think that Vibe's sole appearance will be as the third guy from the back in a Black lantern crowd scene.

Hmm as a person or as a corpse?

Rumors were flying at San Diego about a post-Blackest Night team consisting of Vibe, Brother Power the Geek, Ultra the Multi-Alien, and Super-Chief. The Mighty Returners!

Be careful what you wish for. Nothing gold can stay...

Correct me if I'm wrong, but don't you need a body to become a Black Lantern? And wasn't Starman's pretty much atomized in a huge explosion?