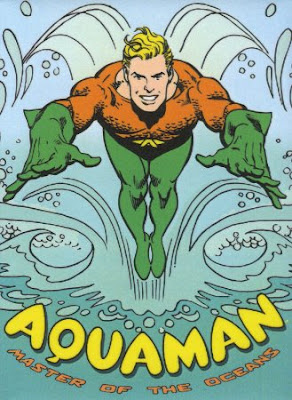 Check out the NY Comicon podcast at the DC page. During one of the Final Crisis forums Morrison says that Aquaman shows up in issue 3 riding a seahorse. From the context it seems he meant the original Aquaman. You then hear Didio say something to the effect of "Did he just say what I think he said?"

I hope you're right, or right enough that he just comes back in FC. Frankly, I don't even need an explanation, he could just show up and I'd be happy.

*Aquaman walks in to JLA HQ*
Arthur: "Hello everyone"
Everyone: "Oh hey Arthur, how's it going?"
*things carry on normally*

Done, and we can all just forget about the last 2 years. Except Tad Williams, someone get him back.

I have to agree with Jon...I haven't been too happy with Aquaman in the last couple of years so...if he just walks in says hi with no explanation...I'd be happy too. I'll make up something in my head for his explanation...i am sure it would be much better than what they could explain :)

Final Crisis ends close to the end of the year, right. Maybe Aquaman could walk into the JLA/JSA annual holiday get together carrying the cranberry sauce.

And yes, get Tad Williams back!

I don't even need an explanation, he could just show up and I'd be happy.

Wouldn't be the first time a "Man From Atlantis" that everyone thought dead stepped out of the shower alive and everyone went on as normal, would it?

Can someone please tell me when Barry came back?

Ah, I can hear the 60s cartoon theme already

You say Ack-waman, I say Ock-waman...let's call the whole thing off.

DC has proven willing to back away from their otherwise bad ideas (Spoiler/Nightwing/and even Barry ymmv), and yet they kept indicating that they couldn't reverse Arthur.

I believe this will be because Morrison was already weaving the story and inevitable return into Final Crisis. Something they needed Aquamullet for. Or something very much like it.

Very interesting theory. I hope you are right. Even if it's the Sword of Atlantis Aquaman, I'd be fine with that as long as he's appearing monthly somewhere again.

However, I have to take issue with the Tad Williams requests. I would much rather have Kurt Busiek back. Just my two cents on that one.

Final comment: I LOVE your banner with Vibe in the center. Awesome!

maybe barry allen could come back... not as the flash, not as libra, but as aquaman!