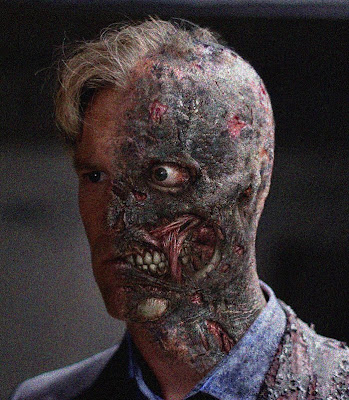 Of course Freud said all this, in less techno and biological sense, some 120 years ago.
And they said it was just an ad hoc theory.

Here's to you Sigmund, some of us are still willing to follow in your steps, both when we are laughed at and when suddenly "hard"( or approaching so ) science tells us that we were right all along.

For years Two-Face was among my least liked super-villains, as he was so often played as a simple thug with a garish sight and a narrative crutch. It wasn't until Frank Miller and the Batman:TAS began playing up Harvey Dent and the character's moral duality that he began to interest me. In fact, Aaron Eakhart's role is the only reason I have any interest in seeing "The Dark Knight," and that grotesque visage is as shocking today as Dick Sprang's take must have been in the 50's.

Hey, Scipio. Still enjoying the blog. Re: your post, look up the word bicameral on wiki or Google it...

Nice post, I read the previous ones you linked. But after reading, I'm not sure how the portrayal in Long Halloween comes in conflict with it, hush sure, but LH never showed the two sides as distinct, and the speil about justice before he kills the roman seems to hold with you idea. Now the other portrayls you sited I agree with, but other than the fact that they didn't show dent as violent before the scarring, I can't see the same problem.

Nicely reasoned, your idea that Two-Face isn't the problem, but the solution, is particularly apt. Which makes me believe that Harvey Dent would STILL be flipping that coin whether he was disfigured or not.

I've heard the idea advanced that we don't actually make any decisions. That we are all exceedingly complex "robots" running along tracks determined by biology and environment. We have no control over our lives; what we perceive to be decision-making is really just our brains justifying our actions as (or after) we make them.

Which brings me back to Two-Face.

As you've said before, when Two-Face was originally conceived, he was a synthesis of his good and evil impulses. Often, he would decide what he was going to do, and the set up the coin toss so that either outcome would have pretty much the same result.

"Bad side, I kill you. Slowly. Good side, I'll make it quick." sort of thing.

And this fits nicely into your "natural desires or human defense mechanisms 'gone wild'" theory.

Self-justification is an extremely important brain function. It allows us to explain our actions to others, as well as assuage guilt. "Putting grandma in a home was best for everyone."

And, of course, we can only hope that this is what Jonah Hex will look like in the upcoming movie

That's a really good take on Two-Face. I don't have any real comment, just "right on."

You could argue that Two-Face is the abrogation of responsibility made flesh. He over-simplifies situations into simple dualities and then flips a coin to absolve himself of the burden of choice. However, his simplification of the world into only two sides involves tremendous amounts of choice. To frame the world into dualities takes a lot of shutting-out and selective vision.

And then there's the question of when he "lets fate decide" and flips the coin; yet another choice. But to Harvey, he's not really choosing anything at all.

Two-Face is that guy who does what he wants and later proclaims it was necessity that forced his hand. He's the guy who screws up his life and everyone else's, then proclaims it was due to "bad luck" and "fate." He's the guy who can't handle complexity, and will spend his life trying to cram a round peg into a square hole rather than reframe a problem. He's capable of seeing only two sides in a world with billions of them.

Imagine him murdering a string of cops for some trivial failing because, to Two-Face, Good Cops Don't Do [Whatever].

To yammer on, Two-Face pairs with both the Joker and Batman brilliantly. It's great they're all in the new movie together.

The Joker is chaos in purple pants. He is no one, he comes from nowhere, and he lives to randomize the world as much as he can. He destroys order and life. Batman is all about order. He spends his life imposing that order and trying to achieve justice in an unjust world, preserving life and seeing that the good are rewarded and the evil punished.

Two-Face is not a halfway point. He refutes them both. He doesn't believe that all is madness, like the Joker, nor does he believe that Batman's quest for order is meaningful. Rather, he believes that there is an order, but that it's "fate," a force that cannot be steered. Two-Face sees himself as the stone-cold realist, the man who sees what's really going on, and he's just going along with it.

(Sorry to take up so much commenting space. Two-Face is such a great character, he gets me chatty.)

Since reading the original Two-Face stories a few years ago, he's become my all-time favourite Bat-villain. Not saying anything against the B:TAS origin, which was great, but...I like the Two-Face who's "queer...frightening...!" precisely because he's not crazy.

As Batman isn't crazy, either!

No wonder kids loved comics, when they had stories that vibrated with such gruesome meaning in 'em! Many's the time, on the old school playground, that I wished I had a scarred coin to flip!