Every since I was informed by Absorbascommenters about this, this "slash fic" phenomenon, I've been curious about it. I've never really encountered any (except one site with a somewhat disturbing Hugo Strange novella), so I thought I should try to find a way to generate my own.

My first attempts failed. I could never find a hook, a nub around which to build my story. But then I thought to apply the principles of blog posting ...!

Success has crowned my efforts. What's more, I am perfecting a method by which anyone can write such adventures, a modus slashficiendi, as it were. So far it's pretty simple; 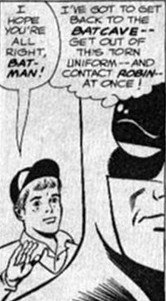 The boy had been unexpectedly rough--too rough, Batman tried to convince himself. But Batman had enjoyed it, more than he expected, and certainly much more than he had any right to.

"But, no, it's unthinkable! I must conceal the evidence of my shame, return home to my devoted pal, and forget this ever happened!"

Bwhahahhaha! Oh, this is priceless. Thank you so much.
*snerk*

I hope this is a recurring feature.

I hope this is a recurring feature.

What would be better is if this was combined with Haikuesday.

This is what happens when you let Grant Morrison take a few steps backward.