A Place at the Table

Speaking of interesting pictures, have you seen this scene from a forthcoming issue of 52? 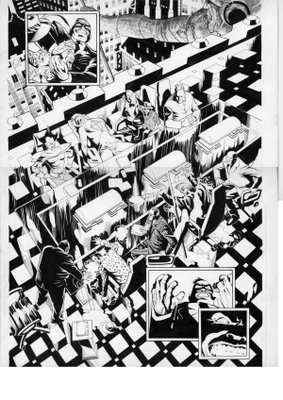 I'm not sure who the shtarker is killing everyone at the table, but if I had to guess I'd say it's "the new Blockbuster."

In addition to the random ganglords around the table, I see:

The Mad Mod (quite dead), Magpie and the Ventroliquist (who, as we already know, die after 52). and the corpse of Kite-Man (a.k.a., Charles Brown).

Oh, and that other gentleman, with the hair? Recognize him? You should. 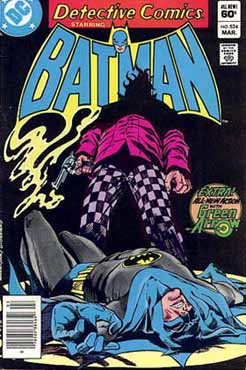 In the March 1983 issue of Detective (No. 524), an unprepossessing Gotham ganglord known as "the Squid" squares off against Batman. Impossibly, the not particularly impressive Squid manages to kill Batman and is proclaimed king of the underworld as a result.

As it turns out, the story is a Gotham redux of the famous Civil War tale, "Occurrence at Owl Creek Bridge", by Ambrose Bierce. In fact, the Squid has just been fatally shot, and is only imagining his triumph over Batman in his last moment of life.

The story was very loosed reinterpreted as the "Man Who Killed Batman" story on BTAS, with Matt Frewer as "Sid the Squid".

P.S. I guess a lot people haven't read or don't remember Tec 524, even though, for a reason I haven't mentioned, it's pretty much the basis for everything that's happened in the Batman mythos since then. Do you know what that reason is...?
Posted by Scipio at 10:30 AM

Wasn't the Squid the guy that Killer Croc offed, back when he was a well respected pimp and not a cannibal at all?

Was this the issue Jason Todd was introduced?

In fact, Batman said Magpie died years ago back in "Superman/Batman" #2 and I think the Ventriloquist died at the end of David Lapham's run on Batman. It looks like "Blockbuster" may be in the business of resurrecting his favorite Bat-villains

You can never kill Kite-Man.

The glider suit is just there for show.

Jason Todd did first appear in this issue of Detective.

Sid the Squid was also an Animaniacs character. He was one of Slappy Squirrel's antagonists, in a trio with Walter Wolf and Benny the Mentally Challenged Bison.

well, if Blockbuster is resurrecting Batvillians, then it certainly would work in the themes of 52: redemption and resurrection.

Killer Croc a pimp? PLEASE tell me you mean cool.

Challenge accepted. I'm digging up that issue of Detective tonight.

Killer Croc was, before he became some wierd animal thing, a pimp and briefly the big crime lord of gotham. That was his thing. Pimping. Pandering. The selling of lady flesh for money.

Crazy! Detective 524 is one of my favourite Batman stories. The Squid is so pathetically underrated a Batman villain.

Love it. Dark and fast-paced with a lot of the zaniness of the 60s TV show. Grrrreat!

Talking of resurrected Bat-villains, I've heard Film Freak has been seen lately, and I know he was killed by Bane right before I stopped reading Bat-comics. Is this a new Film Freak, or a Superboy Prime continuity punch?

I could swear that page is the evil version of Infinity Incs' Page One.

I know he was a big gangster and cool bad guy before the whole cannibilistic lizard thing, but a real honest-to-god pimp? For some reason I am having trouble picturing a large man with scales selling women.

How is it any harder to believe than Dr. Ruth Westheimer giving sex advice, or Dr. Phil writing a diet book?

Yes!!! Now my idea for a cool revamped Kite-Man can go forth unhindered!

I'm pretty sure the big guy is Tobias Whale. Trust me. I own every Who's Who comic printed.

The Jason Todd thing is a red herring right?

Clearly the scene that impacts Batman for the 23 years and going since this was published is that he finally became the recipient of octopus love (for purposes of this discussion, let's not nitpick about the difference between octopi and squids). Once you get the octopus love, you''re never the same. Or so I'm told.

And you have to love the Robin-coordinated look Dick Grayson pulls off at the society party. Yellow suit with a red shirt. It's fashtastic.

By itself, it's garish, but it becomes fashtastic when he and Johnny Sorrow both show up at the same party.