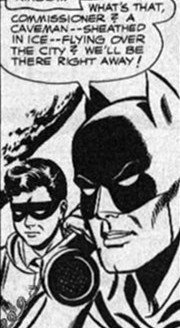 They must have just put tags on a dart board back then and just used which ever ones got hit. Now they could use a simple computer theme generator.

"What that? A plastic weasel in a marshmallow chariot?! We will be right there."

Stories could practically right themselves.

Don't forget that the ice-sheath is somehow flexible. As they take great pains to point out. (Hey, at least they noticed the absurdity of something encased in ice swinging a club.)

I thought Robin looked sad that they were actually going to have to go out and work today.

Maybe he was actually talking to Lassie instead...

"...plastic weasel in a marshmallow chariot.."

In stores this Easter!

"What that? A plastic weasel in a marshmallow chariot?! We will be right there."

No, no Grant Morrison! No stealing ideas from comics blogs! I am wagging my finger at you in anger, IN ANGER I SAY!

The Batphone is by far the worse possible idea, seeing as they can trace the call just by holding Batman there with details about the resurrected sabertooth German Shepard with sonic screams tearing up the garment district.

You obviously forgot about the time the police tried that in the television series. Batman was able to reroute the trace to an old man's apartment.

Batman thinks of everything.

"Whats that commissioner? A Flying Gorilla in a Batman costume with the experimental laser? i'll be over right away!"