As you may recall from the Assigning of the Assignments that Hawkman leapt to the conclusion that Degaton would attack the Mayor of Gotham, and so decided to go protect him.
Naturally, this is what happens, because Golden Age Hero Hunches are infallible.

Before Hawkman can help the Mayor, he's got to save some people threatened by with more effects of The Change.

As predicted, Degaton's Diabolical Forces emerge from the subways we saw them lurking in during Atom's assignment, poised to take over Gotham's civic center.

You may be wondering by now: if this is Gotham where's Batman? Well, sweetie, this is Golden Age.  Things don't have to make sense the way you are used to. Also; this ain't Marvel.  There are no other heroes in the world other than ones in the story you're reading. Besides, it's June/July 1947, and I know exactly what Batman is doing: fighting aliens.
Per Degaton's first tactic is to establish a base of operations for himself in an antique shop, because (a) he's knows it will be unaffected by The Change and (b) he's a big old closet queen.

Aside: It may seem like Degaton's plan is silly and grubby-- robbing insurance companies, lumbering around in tanks, sequestering in antique stores, roughing up mayors. But I remind you it's 1947, and people were quite aware that when painter Adolf Hitler set up to re-make Germany, and then Europe, into his own "artistic vision", that plan seemed silly and grubby, too, and the world paid dearly for not taking it seriously enough soon enough.

Well, this is the G-D Gotham City and its Mayor is no Neville Chamberlain; he's ready to gun down any costumed psychopath who comes after him, because that's just part of the job.

Unfortunately, the Mayor Theodore E. Bare is caught flat-footed by The Change like a cabana cougar with a poolboy.  As much as I love Kale (particularly after his gentlemanly insistence that the Mayor wear a hat outdoors), I confess I'd love to have seen Mayor Ted E. Bare here unblinkingly pump a lead pellet into Kale (or whatever flintlocks fire), because it's Gotham and he was already practicing in case the Gentleman Ghost showed up.  But the Mayor's hesitation lost him the moment and the gun simply disappeared before he could fire off a shot.

Kale brings them to Degaton, as if to say, "Remember when a guy four inches shorter than Bruno Mars was kicking your *** and I had to save you? Yeah, well, I just kidnapped the Mayor AND beat up HAWKMAN. Personally, I think I'm the one with the big "D" around here."

I appreciate Hawkman's smack talk. "So... you conquered an ANTIQUE SHOP with your army. Oooo, impressive.  Ever consider joining C.A.W.?"
Degaton is too dull to perceive irony, however, and after quickly abandoning his half-hearted attempt to get the Mayor to sign his Machtergreifung document, he rushes to what he's been dreaming of while polishing the furniture knobs:
tying Hawkman to a certain bed.

Well, now we know what Degaton's been planning all day.  He's delighted at the Mayor's refusal to cooperate, because now he has an opportunity to be a ****, which is truly his only goal in life. 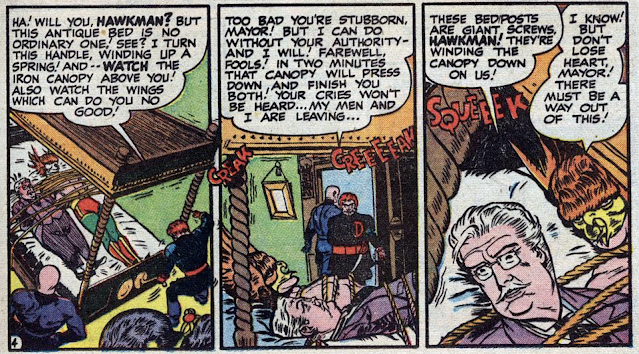 OMG, this is literally the crushing canopy-bed from William's Castle's 13 Ghosts (which won't be made for another 13 years) . I can't believe my Illusion-O glasses!

I admit this a classier death trap than the last two. But, c'mon, this isn't the first time Hawkman's been tied down to an antique bed with somebody he just met and a limited amount of time to get out of the house.  It's like throwing Br'er Rabbit into the Briar Patch.

Having learnt his lesson from previous experiences, Hawkman warns his bed-partner to brace themselves, because he's going to give a final burst: "Hit the ground: this is going to be oomphy!"

"I'll untie you later; can't risk any chance of a fight now, you're too precious." Sigh. Why can't ALL men be as romantic as Hawkman?

Well, that was ... very Hawkman-y, although not a lot was accomplished other than his limited mission of "protect the Mayor." Maybe tomorrow's assignment will be more action-packed?

Get some for some pulse-pounding paper-citing action tomorrow with Dr. Mid-Nite & The Scientists of the World!
Posted by Scipio at 7:30 AM

Email ThisBlogThis!Share to TwitterShare to FacebookShare to Pinterest
Labels: Hawkman, jsa, Per Degaton

I get the insurance company setting up exhibits of hazards; it's a little far-fetched but it makes sense. I don't get the antique store that specializes in murder beds.

The more I think about this -- and that's a bad plan, really -- I am left concluding that Mxyztplk and Bat-Mite have a long-standing bet over the outcome of the Battle of Arbela, and the technological advancement they're willing to tolerate.

"I don't get the antique store that specializes in murder beds."
Oh, I do; I live in DC.

Hawkman’s mask being a smaller bird face over a human face is up there with Atom’s outfit in weird JSA fashion choices.

Hawkman's breezy haiku about crooks with hair was clearly intended to rile up Kale. No wonder Kale slugged him instead of just shooting him. Clubbing him down is more satisfying.

I enjoy getting
Into a crook's hair and un-
der his chin like this!

I not only imagine Anthony Cardigan as Kale, but Epic Lloyd as Per Degaton, because who better to play a diminutive, spitting-mad dictator?