My recent post about Mr. Mind's connection to serialization in comics storylines has made me realize something terribly obvious that I never noticed:

Golden Age comics were NOT written for kids, no matter what they tell you.

When they began making comics, composed of part newspaper comic strip reproductions and new material, they were doing the same thing newspaper did with the comics page: trying to appeal to as broad an audience as possible.  So Golden Age heroes were just as bloodthirsty as newspaper adventures strips, like the Phantom or Dick Tracy.

It really wasn't until the Silver Age that publishers suddenly realized: hey, most of our readers are CHILDREN.  We can, and should, start to use styles targeted toward them.

This is why people think Comics Used To Be So Innocent; they are thinking ONLY of Silver Age comics.  Golden Age comics weren't like that at all. Case in point: two panels from a Rusty Ryan adventure story in early issue of Feature Comics: 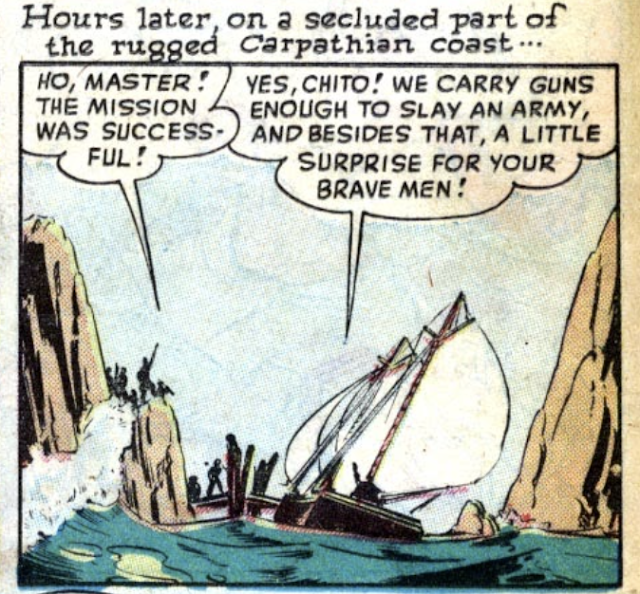 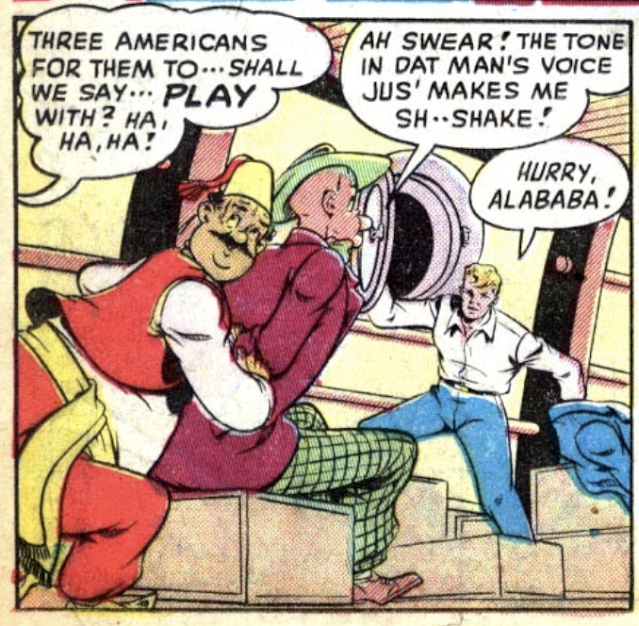 There is simply next to no way to interpret "play with them" other than sexually.  That was NOT written for children.

One of the reasons that I disagree with the various comic book historians on delineating "ages" is, in fact, because the the Comics Code Authority is like a light switch, for most companies, abruptly shifting from a medium where a random reader could find just about anything to read, somewhere, to a medium that was not only aimed at kids, but aimed at kids whose parents wanted to raise them with extremely specific political views. Criminals never have a valid point. Authority figures are never corrupt. There is no diversity, though diversity was already uncommon. Women are either obsessed with getting married or obsessed with finding their missing father.

DC got ahead of the curve, by the way, issuing internal CCA-like guidelines around 1948 as a reaction to comic book burnings. But you can see the industry change most dramatically next in 1970, when the Code was amended to allow horror monsters (like zombies) and limited drug use again.

That said, a comment like that would fly over the heads of most kids, I suspect, and so was probably more for the adults (particularly soldiers and sailors) to get a cheap laugh.

@John Hendry - The Black Sea borders the Carpathians, I believe.

If I were a kid reading this who wasn't yet aware of sex, I'd assume that the prisoners were to be tortured. Which isn't so far off the mark, really. I'd call this "getting stuff past the censors" rather than "writing above the presumed target audience". Otherwise all sorts of things become classed as "adult" entertainment, like Animaniacs, or Shrek, which are really just throwing in jokes to amuse the creators or to broaden the audience a bit.

Also, I think comics were already viewed as children's material even before 1960, or even 1956. Congress made that point quite forcefully in 1954, and there were groups protesting comics as being inappropriate for kids even in the '40s.

I'm also not sure that we, 80 years later, have the best idea of what the '40s considered "appropriate for kids" (even bearing in mind that you're a few decades older than I am). All sorts of things have been published as "children's literature" that would horrify contemporary people.

Just around the corner from the seacoast of Bohemia.