All Will Be Well

Hear me! I bring good tidings: all will yet be well.

It's not that there aren't many good things going in comics right now (both on paper and on screen).  But dumb things like the above still rankle.  That's why I take solace in reminding myself of an EASILY forgotten axiom of comics: 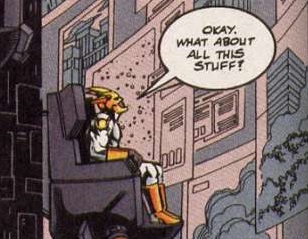 Remember when Alfred was dead?

Or Barry Allen?
Or Supergirl?

Do you remember Aztek?

Do you remember Aquaman's hook hand?

And his water hand?

and when he was *snort* raised by dolphins?

And her mod look?

And when she became a goddess?

Remember the Sword of the Atom?

The Sword of Atlantis?

The Sword of Warlord?

Do you remember the hunchback who lived in the Batcave?

Or the one who was Superman's brother? 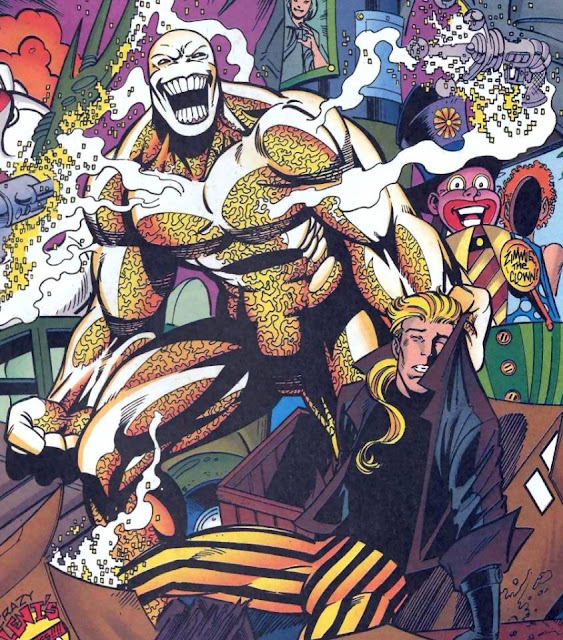 Do you remember Tanga?

Do you remember the New Guardians?

Well, I could go on. Anyone could.  But why bother? All these dumb ideas were effaced by time, erased by apathy, negated by negative feedback.  That's why, whatever there is in (DC) comics that is bothering you, if it's truly a stupid idea, don't worry:

it will go away.

Email ThisBlogThis!Share to TwitterShare to FacebookShare to Pinterest
Labels: Vixen

"Try, without laughing, to imagine Wally West saying "All will be well.""

I still think the best way to fix Wally is to set him up in the American Southwest and give him wide open spaces and a new supporting cast. Quit giving him Barry's hand-me-downs (city, costume, even girlfriend's occupation). Give Barry the Midwest, make Jay a Canadian (he's almost wearing an RCMP uniform anyway so make him RCMP-adjacent), and -- this would be the most controversial thing -- Detroit would be Central City while Windsor would be Keystone City.

Except Bendis. Bendis will be churning out lifeless and pedestrian storylines until the sun goes nova. Will no one rid me of this turbulent scribbler?

Aztek, good Lord. Easily the most convoluted origin ever, and if you held a gun to my head I couldn't tell you what his powers were. Some sort of wings appear and he flies and ... there, I just ran dry. Triumph was ... magnetic, I think? Like Dr. Polaris without the Las Vegas showgirl headgear?

But yes, I've read comics long enough to know that nothing lasts, and that's actually quite comforting. No matter what idiocy gets printed, another will come along and undo it all. That's a feature, not a bug.

They always seem so proud of themselves when they come up with "Amazons, but from the Amazon" again, too. But like they say, if you don't like DC continuity, wait a few issues.

Garbage Man and Tanga are the only two that I don't remember seeing, which is weird, given how few comics I've actually read since, like, 1992 or so.

The Ten-Eyed Man deserves his own series, though. At least in theory, he's an extremely serious character (soldier blinded in the line of duty saving his team) who was mutilated with the absolute silliest gimmick in the DCU. That dynamic seems like it should at least be able to carry a few issues.

I'd take it all back for 3 panels of the Kryptonian Thought Beast. 21st century DC, for all it's faux retro-nostalgia, seems to be dead set on forgetting all the stuff I like* alongside your list of things I'm indifferent about.

*Except Nubia. Nubia is one of those characters that just WORKS for me on a soul-deep level and I did see a Nubia OGN the other day.

I assume the "free plug" was a reference to "All in the Family," though why he phrased it that way is anyone's guess. That said, Robbins's ear for dialogue was almost as tinny as Roy Thomas's, though he compounded the crime by being such a crappy comic book artist.

Or possibly a reference to Jack Kirby's "Dingbats of Danger Street."

Ah, yes; that's exactly what it is, since that particular Kirby monstrosity is contemporaneous with the Man-Bat/Ten-Eyed Man battle.

How is Tommy Elliot gone? He's still relevant, even in DC Rebirth...

Poor Aztek. The Lex-Luthor backed Justice League stooge was such a dunce that he failed to save his love interest from his first supervillain. If they kept going in that direction - well-meaning, heavily backed, highly trained hero who was still hopelessly incompetent, an anti-Batman who always loses and betrays his team without trying or even knowing it - it could've made for some great post-modern reading.