With the gargoyles captured (and off to have their faces presumably 'returned' to them by Dr Rankin at some point), the Real Villain of the Piece hightails it outta there.

Returning to his hospital (how DOES a hospital become famous is all it does is mess up people's faces?!), Angel forces Dr. Rankin to give him a new face as a ticket to new life.

After all this shouting in the hospital Quiet Zone, the deed is done.
But, lest we forget, Prof. Angel is, in his eagerness to keep himself at arm's-distance from his nasty business, SLOPPY.  All of his gargoyle crimes were unproductive fiascos, he let someone else 'do in' Green Arrow, and then couldn't even be bothered to make sure Green Arrow was dead.
So perhaps his belief, as he strides purposefully toward the glorious end of his next five-year plan, that he's gotten off scot-free is misplaced.

Sure enough, he's soon got men on his tail: the po-po! 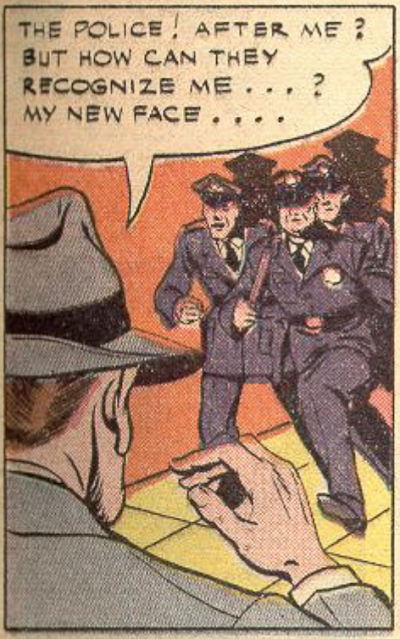 Panicked to defend himself, he pulls a gun...
and he's shot dead by five cops with seven guns, who apparently were chasing him not because he was Professor Angel, but because they thought he was someone else.
Yes, Doctor Rankin got his revenge on (and freedom from) Professor Angel by giving him the face of someone the police would naturally chase:

Well, much like Professor Angel, I certainly didn't see THAT coming.  But I guess if you don't want men on your tail and shooting on you, don't run around looking like J. Edgar Hoover.
My apologies for dissing Dr. Rankin earlier; perhaps he IS Star City's Sonny Blandish!  He, at least, stopped Prof. Angel (a powerless, talentless, sloppy blackmailer) when Green Arrow couldn't.  And Rankin was smart enough to know that anyone dumb enough not to notice that Ollie was still breathing would also be satisfied when you gave him this face:
So, all's well that ends well. The bad guy is dead, the victims get their faces 'returned', no one cares about some dead truck drivers, and Ollie gets another item for his Armoire of Trophies.

These stories must be Ollie retelling them at a bar years later, because it really feels like he had no idea that he was involved in a crime, has no reason to know who Angel is, and certainly wouldn't know that he was off the streets. I propose going back in time to change that coda to "that's right, if it weren't for that card, Roy, we would've climbed into the carnage to claw our new tires from the cold, dead hands of caravan security guards and gone home instead of crashing that fun charity event. And did you see the papers? Apparently J. Edgar flipped his wig and was gunned down in Another City when he pulled a gun officers who just wanted his autograph."

The mention of saving Bright from the CW reminds me, though, that 1942 was also the year that original "fourth network" Dumont launched. It seems weird that, for the wide variety of shows they tried out, none of them were costumed vigilantes. And for a cheap knockoff like Green Arrow, I can't think of a better network than "let's film everything in our own offices and maybe hang some hubcaps on the wall for science fiction shows" Dumont...

So Batman has ROBOT DINOSAUR as a trophy, and Green Arrow has ... someone else's Equity card?

I think that tells us all we need to know about the relative merits of Batman and Green Arrow.

"has no reason to know who Angel is"

But -- in fact -- Ollie hasn't EVEN SEEN PROFESSOR ANGEL'S FACE.

A robot dinosaur won't fit in an armoire.

No theoretically amusing comments relating the Hoover link to the present-day controversy about taking Hoover's name off of FBI HQ, I see. Okay.

"A robot dinosaur won't fit in an armoire."

A TINY robot dinosaur will. And you just KNOW that there's some villain, somewhere, who at some point sent tiny robot dinosaurs out to commit crimes.